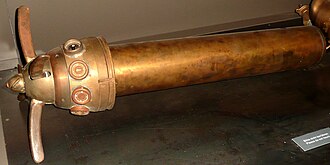 An impact fuse detonates an explosive charge when it hits the ground or a target object . The detonators are used in almost all types of military ordnance : high-explosive bombs , torpedoes , land and sea ​​mines , rocket weapons ( guided missiles ), hand grenades and the grenades fired from tubular weapons ( explosive or mine projectiles ).

Impact detonators could be divided into different categories.

According to the type of release:

The above modes of operation require the impact of the weapon with the direction of movement parallel to the longitudinal axis of the weapon. This is usually ensured by the external ballistic properties of the ordnance (stabilization of the flight path through rotation of projectiles, stabilization or control of the flight path through tail units in bombs and missiles). However, these detonators are not reliably triggered at non-optimal angles of impact ( ricochets ), and duds can occur.

According to local arrangement:

Impact detonators are often combined with delay elements: the explosive device should not detonate immediately on impact, but rather penetrate the target object a little first in order to take effect. This is necessary, for example, with armor-piercing weapons (detonation only after penetration of the armor), but is also required for impact fuses of the artillery in order to combat different targets. In this case, detonators are often used in which the function can be set with delay (mV) or without delay (o. V.) before firing. The German artillery fuze impact fuze 23 modified with 2 delays (AZ 23 umg. With 2 V.) could even be set between o. V., 0.2 seconds and 0.8 seconds delay. The delay was usually achieved by a pyrotechnic fuel.

As early as the Second World War, in addition to mechanical impact fuses, electric bomb fuses were also used on the German side. In these, the detonator was ignited by electrical current, which was generated either during the impact by the movement of a ring magnet through a coil by means of induction (sensitive impact fuse eAZ (66) for fragmentation bombs SD 10 A) or when the bomb was dropped in a capacitor was stored and could flow to the detonator on impact by closing electrical contacts (for example AZ (25), AZ (28), AZ (35)). Nowadays, electric detonators are used, for example, in shaped charge weapons, since they have only minimal (for closing the electrical contact) or no mechanical processes at all (when igniting via piezo detonators ) and thus only the smallest delays. Even in weapon systems that are mainly triggered by sensors (proximity detonators), an electric impact detonator is often available.

The general safety requirements for all detonators also apply to the impact detonators:

A long shelf life (at least ten years) is generally required for military ammunition. During this time, neither the safety nor the functional properties may be impaired. This relates, for example, to corrosion, the reaction of the different materials in the igniter with one another or the penetration of moisture, dirt, etc. into the igniter.

The fuse elements of the detonator must effectively prevent unintentional unlocking and, in particular, unintentional triggering during the expected loads during handling and transport. The requirements for military detonators are significantly higher than, for example, in the civilian sector, since, in particular in the event of an emergency due to hectic rush, enemy fire, etc., proper handling is not always guaranteed.

The purpose of interrupting the ignition chain is to prevent the detonation from being transmitted to the subsequent ignition elements ( boosting or transfer charge) in the event of an unintentional ignition of the detonator (e.g. through fire, bombardment, etc.) . This is achieved, among other things, by the fact that the detonator is housed in a movable carrier that is only brought "into functional line" when the safety device is released. Nowadays, two independent forces have to cancel the interruption of the ignition chain for this purpose (with artillery detonators usually acceleration and rotation forces ). The requirement for detonator safety was not generally implemented until after the Second World War, until then the detonator in the so-called priming charge (which consisted of detonator, booster and transfer charge and was inserted into the explosive directly under the detonator) was always in use in German artillery fuses the functional line.

In the case of bomb detonators, the safety of the detonator against unintentional triggering in collisions with birds , but also in collisions with other aircraft up to a crash, must also be guaranteed during the approach to the target until the bomb is dropped . This also results in the possibility of emergency dropping, that is to say dropping the bombs in an emergency situation without unlocking them and detonating on impact.

After firing (with barrel weapons) or dropping (with dropping ammunition), especially with impact fuses, the complete release of the fuse should be delayed at least until the projectile or the bomb has moved far enough away from the gun or the aircraft that a detonation occurs this is no longer endangered. This is to prevent, for example, when firing from camouflaged cover, the detonator can be triggered immediately in front of the barrel muzzle by camouflage material or a randomly flying bird and thus endanger your own gun operation.

With artillery fuses, especially with impact fuses of small-caliber automatic cannons, the design must avoid triggering by small objects in the trajectory (insects, raindrops, hailstones). This is mainly necessary for percussion fuses, which only have a cover membrane on the fuse tip in front of the ignition needle. Damaged launch tiles can lead to early cracks .

Sample data from a grenade

Sample data from a free-fall bomb