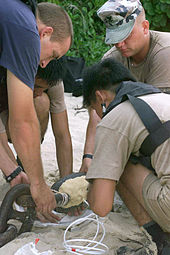 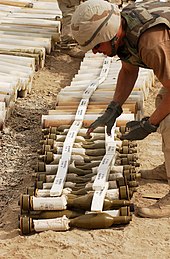 C4 (English: Composite Compound 4) is a very effective plastic explosive that is often used in the military . In England it is also called PE4 (Plastic Explosive 4).

C4 is one of the malleable explosives . Due to its chemical composition, it is difficult to detect by conventional explosives detectors.

The storage of C4 is relatively harmless as it is safe to handle. Neither fire, electricity, nor shock (even with a hammer) will cause an explosion. If you light it, it will burn without exploding. Only sufficiently strong pressure combined with heating can lead to an explosion; even incendiary ammunition was not sufficient in tests.

C4 consists of 91% hexogen , 5.3% bis (2-ethylhexyl) sebacate (DOS), 2.1% polyisobutylene and 1.6% mineral oil. In order to make the misuse of C4 more difficult, strong-smelling substances have been added to the explosives during production for some time, with the help of which it can be more easily detected by sniffer dogs . Metal dust is incorporated for better visibility in X-ray machines or to find it with metal detectors .

The hexogen is slurried with water. The polyisobutylene is then dissolved in a suitable solvent ( methylene chloride or chloroform ) using the DOS and mixed with the hexogen. The solvent is distilled off and the product can be used.