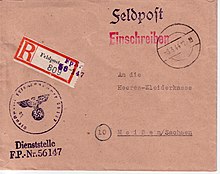 In the case of the German field post in the Second World War, a distinction is made between military field post items that were sent by Wehrmacht services and had a stamp or official seal on the outside, and private items sent by Wehrmacht members as senders or recipients that were sent in personal matters. It was an unrestricted part of the Wehrmacht , the previous dependency on the imperial postal administration for postal technical issues no longer existed. 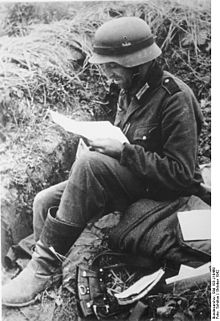 Field Post in the Navy : Distribution of Mail on a German Outpost Boat (1939).

Those entitled consisted not only of the families of the three services Army , Air Force and Navy active duty, but also from the SS available troops , the SS Death's Head units , the police divisions and other independent associations of SS available troops. Civilians who were on an equal footing with members of the armed forces (Section 35 of the Armed Forces Act of May 21, 1935) and members of the Reich Labor Service who were deployed in the area of ​​operations in the service of the armed forces (this group also included private persons who were in service with the armed forces and received board and lodging from her), could also use the field post. The prerequisite was the allocation of a field post number to the unit or the office, if an open address was used, the accommodation and meals provided by the Wehrmacht in nature or through daily allowances etc. were decisive.

Ordinary postcards and letters (up to 250 g), small parcels (up to 1 kg), postal and payment orders in the field up to RM 1,000 , postal orders and payment cards from the field up to RM 1,000, some newspapers, field post newspaper packages and telegrams were permitted. Excess weights were tolerated for letters up to 25 g and for parcels up to 100 g. Military agencies could also send items by registered mail or insured mail, as well as parcels. Postal orders, cash on delivery, direct mail, letters with a delivery certificate, return receipts and telegraphic payment instructions were completely excluded.

The following fees were charged for private mailings : Parcels up to 1,000 g 20 RPf. For post and payment orders to the field, field post orders and field payment cards from the field and telegrams, the usual domestic fee. For newspapers, half of the order fee was billed to the publisher. Newspaper packages cost 20 RPf. per kilogram or part thereof. Parcels from home had to be franked, parcels going home should be franked. Only the simple shortfall was then charged, this also applied to parcels within the Wehrmacht.

All consignments had to be marked “Field Post” and the exact address of the sender. On consignments from agencies and members of units with a camouflaged address, only the field post address was allowed to be used as the sender information. The field post from members of the Wehrmacht either had to be posted to a field post office or stamped or stamped with the unit's official seal had to be delivered to a post office for onward transport by this same unit. Posting through mailboxes was to be restricted.

Back - favor for Greater Germany

Items that did not meet these conditions were charged the public postal service like normal items. The address of the consignments to the soldiers had to include the rank and name of the recipient, as well as either the five-digit field post number or, if the address was open, the full office address of his Wehrmacht unit. Shipments with the recipient's home address were subject to public charges. These provisions came into force on April 1, 1940.

Soon the weight for field post letters was reduced to 100 g. Private field post consignments over 100 g were now considered postage-free as small parcels up to 250 g. Parcels over 250 g to 1 kg also cost 20 RPf. However, it was quite possible that parcel traffic to the front or home or even completely stopped for some time, the gazette reports about it again and again. It seems that this shipping method was not entirely problem-free. In December 1940, the weight for postage paid carriage was increased to 275 g. 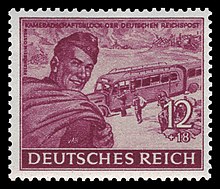 Special stamp from 1944 "Field Post in the East": Field post officer with a mail bag , a Kraftpost bus in the background

Monthly statistics 1939–1944. The December months are colored red for clarity.

According to records of the Reich Postal Ministry , field post items were sent to and from the field in millions during the war:

The extensive army mail mediated by the field post between the armies is not included in these figures.

The stamp numbers 1 to 4 are considered "general issues" and were issued by the army field postmaster in the OKH . The brand numbers from 5 on were so-called "local issues".

The stamp (Michel no. 795) was issued with a two-line imprint 'FELDPOST / 2 kg' as an approval stamp for field post parcels up to 2 kg from November 24, 1944 in a one-off campaign to units with field post numbers, after all field post parcel traffic was over 100 grams had already been discontinued due to the war.

The stamps were intended exclusively for field post parcels with winter clothing from home to the front.

The following field post stamps are not registration stamps, but were private donation vignettes from the local welfare organizations for the benefit of the volunteer soldiers in the Waffen SS and in the Wehrmacht and their families. These editions had no postal significance.