This article deals with the field post in the German territories until 1918 . 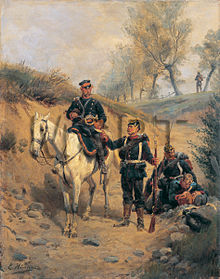 Field post from the First World War (January 22, 1915) with an inscribed date

Feldpostbrief opened and resealed by the Postal Monitoring Commission (back of envelope September 16, 1918)

Already in antiquity and in the Middle Ages there were the beginnings of a communication in war. Actual field post was only developed in Prussia in the 18th century as a result of the numerous deployments, especially in the Seven Years' War . At the beginning of the War of the Bavarian Succession in 1778, comprehensive instructions were drawn up and field post offices were also located in the armies during the coalition wars . In 1813/1814 Prussia had e.g. B. three field post offices with 27 secretaries, four postmen and 79 postilons . However, the delivery took a long time: a letter between Berlin and Paris took twelve days.

Due to the progress in transport and communication technology ( railways and telegraph ), there was also a comprehensive reorganization of the field post. As a result, benefits increased significantly. During the German War of 1866, for example, more than 30,000 letters to and from the army were carried by the Prussian field post. The experience gained in this war led to a redesign of the field post facilities: In addition to field post offices for each army corps and field post expeditions (offices) for the divisions, special stage post offices were now set up to establish mail connections for the moving armies and after the changing ones Had to adapt to needs.

The Franco-Prussian War of 1870/1871 was, so to speak, a test case for the new field post that Postmaster General Heinrich von Stephan had worked out and implemented. During this war, the North German field post consisted of 77 field post offices with 292 officials, 202 sub-officials, 294 postilons, 869 horses and 188 vehicles. At the six collection points on the French border, the mail from Germany flowed together before being forwarded to the troops. Only here were the movements of the large troops, which had to be kept secret, known and the consignments could be delivered from the collection point on the correct route. Field post relays, field post stations and packing depots then led to the center of the individual units.

A special mail connection was set up for the headquarters , which used the railroad and ensured that mail between Berlin and Paris could be delivered within 24 hours. Since operations during the war stretched over an area of ​​over 170,000 km², 411 field post offices were required to deliver the more than 90 million letters, 2.5 million newspapers and 2 million parcels.

The current service regulations of the field post belonged to mobilization and were therefore kept secret at the time.

Due to the advancing technology and the availability of cameras in the 20th century, both film and photography developed into central media for reporting during the First World War , which also had an impact on the field post sent out. The First World War turns out to be the first war in which snapshots of the war and images of the destruction were recorded in large numbers and regularly on photographs and (field) postcards. From sights and destroyed cities, shot down enemy planes or dead soldiers to propaganda picture postcards to ("harmless") holiday cards, the picture postcards sent during World War I show a broad and complex spectrum of information and interpretations. The topics dealt with in the field postcards and letters also show a function that goes far beyond the simple exchange of information: Field post letters and field postcards fulfilled a number of extremely important psychological and social functions for soldiers at war. These were also very important for the relatives at home, especially if they provided more information about the war than the official war dispatches. An exceptional example of this is the school chronicle of the teacher Heinrich Hassenfratz (1860–1928) from Hainstadt (today Breuberg ). He asked his students, who were scattered throughout Europe as soldiers during the First World War, to write him letters “from the front”. He then included this in the Hainstadt school chronicle. The letters are almost an example of anti-propagandistic reporting that soberly depicts the gloomy everyday life of the “fatherland heroes”. However, one can also see from the letters that the soldiers were very well aware that their families at home would perish as a result of their absence.