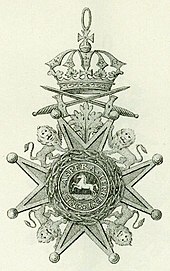 Order cross for the civil knight

The Guelph Order (of Welfen ; English Royal Guelphic Order or Hanoverian Guelphic Order ) was an award from the Kingdom of Hanover and was founded on August 12, 1815 by the Prince Regent and later King George IV .

The order was conferred by the King of Hanover, who was also King of Great Britain and Ireland in personal union until the death of King Wilhelm IV in 1837 . The order was never considered to be a royal British, but a royal Hanoverian order. The order initially comprised three classes. On May 20, 1841, King Ernst August I issued new statutes and from then on was divided into four classes, and the second class of commanders was further divided into first and second classes. After the defeat of the Kingdom of Hanover and the annexation by the Kingdom of Prussia in the German War in 1866, the order was no longer awarded.

With the award of the order classes Grand Cross, Commander and Knight, the elevation to the personal nobility was connected.

There was also a Guelph medal , which was awarded to NCOs and soldiers. The award was associated with an annual donation of 24 Reichsthalers .

The sign of the order is an eight-pointed cross with balls at the ends, in the corners of which are lions facing forward. The Hanoverian royal crown towers over the cross. In the middle the medallion shows a running white horse on a green background. The motto NEC ASPERA TERRENT ( Latin : "Adversity is not afraid") is written in golden letters in the blue ring . The initials of the founder and the year of the foundation can be seen on the back. The medallion was enclosed with oak leaves for civilians and with laurels for soldiers. In addition, two crossed swords are placed under the crown of the military decoration. The ribbon is light blue. For the bearers of the Grand Cross and the commanders of the first class, the decoration consisted of a cross and a star. For the other classes it was just a cross.

On festive occasions, the grand cross was worn on a gold necklace , which alternately shows the royal crown held by two lions and the initials GR (Georgius Rex).