Friedrich Georg Wilhelm von Struve , (since 1831) Struve ( Cyrillic Василий Яковлевич Струве * 15. April 1793 in Altona ; † 11 . Jul / 23. November  1864 . Greg in Pulkovo in Saint Petersburg ) was a German astronomer and surveyor who worked in the Baltic States and Russia . He published significant work on binary stars and carried out extensive geodetic surveys. His son Otto Struve also became an astronomer and his successor at the Pulkowo Observatory .

Wilhelm was born as the son of Jacob Struve in Altona, Holstein . His brothers were the later medicine professor Ludwig Struve and the philologist Karl Ludwig Struve .

In 1808 Wilhelm began studying at the University of Dorpat (now Tartu ) in Estonia , which was then part of Russia. He first studied philology , but after a few semesters switched to mathematics and astronomy . Struve graduated in 1813 with a doctorate to become a Dr. phil. from. In the same year he was hired by the university as an associate professor of astronomy and observer at the Dorpat observatory . In 1815 he married Emilie Wall (1796 to 1834) in Altona, she comes from a Huguenot family and was originally called Valles . The couple had twelve children, four of whom died early.

In 1818 Struve was appointed full professor and in 1820 director of the Dorpat observatory. From 1814 to 1821 he also taught mathematics. In 1824 a very powerful refractor from Fraunhofer with a 24.4 cm aperture was put into operation in Dorpat . In the following years Struve carried out intensive observations of binary stars , of which he discovered a large number himself. From 1824 to 1837 he took micrometric measurements on 2,714 binary stars. In 1827 he published a catalog with double stars, the Catalogus novus stellarum duplicium , and in 1837 his work Stellarum duplicium et multiplicium mensurae micrometricae appeared .

When his brother Ludwig died in 1828, he brought his ward , the later philologist Theodor Struve , to his home in Dorpat. In 1829 Struve was appointed "Collegiate Council" and two years later "Real State Council". With this appointment there was also an elevation to the nobility .

In addition to astronomy, Struve dealt with geodesy . From 1816 to 1819 he had participated in a triangulation of Livonia . In 1831 he published a description of the measurement of latitude in the Baltic provinces of Russia .

His wife died in 1834. In the same year he married Johanna Bartels (1807 to 1867), the daughter of the German mathematician Martin Bartels ; with her he had six other children.

Friedrich Georg Wilhelm Struve initially worked as a director at the Dorpat observatory. When the new observatory in Pulkowo was inaugurated in 1839 , Struve was appointed its first director. Here he continued his research on double stars, supported by his son Otto. In 1843 he determined the aberration of light and the parallax of the bright star Vega in the constellation Lyra . 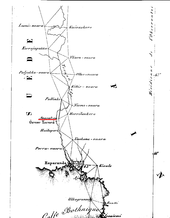 Course of the Struve Arch

After extensive preparatory work, Struve played a key role in founding the Russian Geographical Society in 1845 . He initiated an extensive triangulation, whereby he, together with Carl Tenner, had a chain of geodetic survey points built between Hammerfest in Norway and the Black Sea , the Struve Arch .

In 1847 he published studies on the structure of the Milky Way in the Études d'astronomie stellaire .

In 1856 Struve was appointed privy councilor.

In 1862 he retired for health reasons. His son Otto Struve took over the management of the Pulkowo observatory .

Wilhelm Struve died on July 11th . / November 23, 1864 greg. in Pulkowo and was buried in the public cemetery adjacent to the observatory.

In 1851 he was awarded the Prussian Order Pour le Mérite for Science and the Arts.

In memory of the astronomers of the Struve family, an impact crater on the moon and the asteroid (768) Struveana were named. He is also the namesake for the Pik Vasilija Struve in the Antarctic.

Astronomers are also among his descendants

as well as the politician and economist