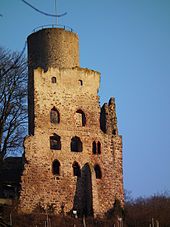 The Strahlenburg, ancestral seat of the family and presumed birthplace of Bishop Eberhard II.

In 1250 he appears in a document with his mother and his brothers Heinrich and Conrad when they exempted the vineyards of the Schönau monastery from taxes. In 1263 and 1272 he was recorded as a canon in Speyer . In the settlement of the dispute between the Weißenburg monastery and the Speyer cathedral chapter, because of the church patronage in Barbelroth , Eberhard von Strahlenburg was named on September 8, 1277 as cathedral choirmaster and arbitrator. According to documents from May 1, 1278 and January 24, 1284, he also served as provost of the Cyriakus monastery in Neuhausen .

After the death of Worms Bishop Simon von Schöneck († October 22, 1291), he was elected his successor in the same year. While King Adolf von Nassau and Archbishop Gerhard II of Mainz supported the elected, the city initially vehemently rejected him, but later came to terms with him. During his brief episcopate, Pope Nicholas IV died in Rome on April 4, 1292, and a two-year vacancy followed . A papal confirmation of the bishop's election was therefore not made.

In 1293 he incorporated today's St. Cyriakus Church in Frankenthal-Eppstein into the Neuhausen monastery .

Eberhard von Strahlberg died on November 16, 1293 and, according to his last will, was buried in the Schönau monastery. A year memory for the dead existed u. a. in the Speyer Cathedral and in the Kirschgarten Monastery in Worms .

The Speyer canon Friedrich von Strahlberg († 1333), for whom there is an epitaph inscription on the Speyer cathedral, was his nephew