The Strahlenberger were a medieval race of Edelfreien that of the 12th to the early 15th century existed from the second half. Their ancestral home was the Strahlenburg in Schriesheim , where the family had originally built a small lordship on the basis of bailiwick rights, which they held as a fief from the Ellwangen monastery .

Originally, the Strahlberger go back to the Hirzberger, today one would say Hirschberger . The Hirzbergers had their headquarters on the Hirzburg or Hirschburg above Leutershausen , which is now part of the Hirschberg community on Bergstrasse . Conrad I. von Hirzberg (died probably 1165) had two sons. The elder, Eberhard von Hirzberg, continued to run the Hirschberg house in Leutershausen. It is mentioned for the last time in 1223. His brother Heinrich founded the branch line of the Strahlberger. His grandson Conrad I built in 1235 on the mountain south of the valley entrance, above the town of Schriesheim, which was founded shortly thereafter, on the bailiff of the Ellwangen monastery, the Strahlenburg as the new headquarters. This led to a dispute between him and the Abbot of Ellwangen. Conrad was subsequently given the imperial ban and finally had to accept the castle and its previous ownership as a fiefdom from Ellwangen.

The name Strahlenburg, first used in 1174, the family had already acquired before the construction of this new Strahlenburg, presumably with reference to an older Strahlenburg of the Hirzberger, which was built as a seat for a younger son, but was then given up again. In fact, there are remains of such a first Strahlenburg, the so-called Schanzenköpfle , only 500 m above the Hirzburg, as well as evidence of two different branches of the Hirzberger around 1200. 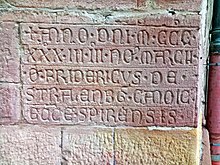 Soon after the construction of the Strahlenburg, the city of Schriesheim was founded, directly below the castle on the fiefdom of the Strahlberg family. Conrad I, the builder of Strahlenburg, had three sons, the first of whom, Heinrich, died before 1255. Eberhard , the youngest, entered the clergy and in 1291 became Bishop of Worms . Conrad II received the inheritance undivided.

During his life, Conrad II took part in feuds to expand his power and that of his house. Later he tried to strengthen the position of his brother Eberhard as Bishop of Worms through feuds, in order to give the lineage of the Strahlberger family greater influence. This was successful in so far as his son, Conrad III., Was enfeoffed by the Bishop of Worms, his uncle, with an extensive area in the Steinach Valley north of Neckarsteinach , which he used to expand his rule in the Odenwald , subsequently to the area of ​​Schriesheim. Waldeck Castle, which was built by Conrad II in the second half of the 13th century, gave rise to the Waldeck rule . In the course of the further expansion of this rule, the forest clearing settlements in Lampenhain , Eiterbach , Altneudorf and Vorderheubach emerged . The founding of Altenbach should be done in this regard.

On the south-eastern nave portal of the Speyer Cathedral , a contemporary memorial inscription to the Speyer or Strasbourg canon Friedrich von Strahlberg († 1333), brother Conrad III.

Waldeck Castle was pledged to the diocese of Worms as early as 1310, and in 1357 Siegfried von Strahlberg sold the castle and rule of Waldeck to Count Palatine Ruprecht I. The last Strahlberger, Siegfried's son Hans, died in 1404.

Here is the family tree of the Strahlberger, with the year numbers indicating the first and last mention (after H. Brunn).