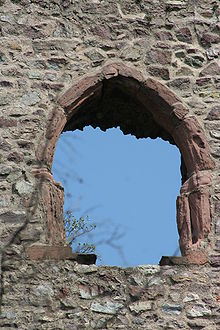 Window detail of the Palas

The Strahlenburg , also called Schloss Strahlberg , is the ruin of a hilltop castle in Schriesheim in the Rhein-Neckar district in Baden-Württemberg . The castle ruins are privately owned.

The ruin with a castle restaurant lies on a flank of the Mount of Olives , which is also called Schriesheimer Schlossberg. The city is just below. From the castle you can see a large part of the Rhine plain with the towns on the Neckar and Rhine , in good weather the view extends as far as the Palatinate Forest and, when the visibility is very good, as far as the Donnersberg . The valley of the Kanzelbach , which rises in Altenbach, cuts into the Odenwald on the side of the Mount of Olives .

Conrad I. von Strahlberg began building the Strahlenburg around 1235 as the headquarters of the Strahlberg family . In 1240 he was first mentioned in a document as Vogt von Schriesheim. Due to the ownership of the castle was under as a fief the monastery Ellwangen . The originally 30 meter high keep and the inner part of the complex date from this time . The hall was probably not built until the 14th century.

In 1329, financial difficulties caused Rennewart von Strahlberg to pledge the castle and the village to Hartmut von Cronberg . Until his death in 1338, Hartmut initiated extensive renovation and expansion measures. In 1346 a purchase contract was signed between Mainz and a son of the Kronbergers, but it was not carried out because Rennewart von Strahlberg was able to raise the amount of money to be released. As early as 1347 he sold the castle to Ruprecht the Elder . In 1468 the Veldenz family under Ludwig von Veldenz acquired the property.

When exactly the Strahlenburg was destroyed has not yet been scientifically conclusively clarified. Two historical events are used as an explanation.

From May 6, 1470, Simon von Balshofen, Vogt of Heidelberg Elector Friedrich I , besieged the castle. The gun master of the Electorate of the Palatinate, Martin Merz , directed the bombardment. The reason for this was a feud between Ludwig von Veldenz and the Elector , which was due to the Weissenburg feud between the Elector and Emperor Friedrich III. originated. After eight days of siege, the Strahlenburg was taken. The crew, 19 nobles and 30 foot servants, were taken prisoner; 16 defenders were drowned in the Kanzelbach because they were from the Palatinate. The castle was set on fire by the victors and the defenses torn down. Schriesheim then lost its town charter .

The second possible time of destruction is assumed to be around 1500. The castle was possibly set on fire by Hessian troops during the Landshut War of Succession . In 1504 they roamed the area and devastated cities and villages.

Demolition of the ruins began in 1733 when the use of the castle's stones to build vineyard walls was officially approved. The Counts of Oberndorff became leaseholders in 1784 and owners of the ruins in 1828. They secured the remains visible today against further decay.

Floor plan of the Strahlenburg

The porphyry and granite of the rock available in the entire region were used to build the castle complex. Get only the slim and very simple round today about 27 meters high keep and the rectangular palace , which is seeded torn and partly. The keep cannot be climbed due to structural defects (as of 2015) . The circular wall describes an almost regular pentagon, one point facing the endangered mountain side. Three early Gothic windows from around or before 1237 have been preserved on the Palas . They each consisted of two lancet windows with a round skylight .

A modern restaurant, the "Burggasthof Strahlenburg", was set up in the facilities.

Castles and palaces in the Odenwald

Castles and palaces in Baden-Württemberg in the Rhein-Neckar district