Parts of the former curtain wall, ditch silted up 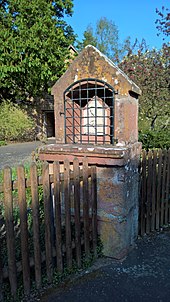 The moated castle Riedern was a medieval moated castle in today's district Riedern of the municipality Eichenbühl in the Lower Franconian district of Miltenberg in Bavaria .

The moated castle is located in the Bavarian Lower Main region on the northeastern edge of the Odenwald and on the southern edge of the Spessart (Wertheim plateau). The postal address is Forsthausstraße 5 .

The castle is believed to be the ancestral castle of the noble family of Riedern who named themselves after the place and the area and the resort owned assets had been invested or so. As an imperial noble family, they were organized in the knightly canton of Odenwald .

Like their fiefdoms , the castle holdings are the same. The castle can be proven on March 19, 1369 in a document with the Counts of Wertheim . The castle is called Schloss zu Riedern and is a Ganerbeburg of various branches of the Riedern family . These conclude a truce with each other , describe in the opening law how the castle hat , i.e. help each other, is to be provided in the event of war , and make the castle of Johann I von Wertheim a fief. The Riedener tried to navigate between the powerful lords of their time and were fiefs of various lords, in addition to those of Wertheim, the lords of Rieneck and von Dürn as well as the clergy Kurmainz and the diocese of Herbipolensis .

At first, the castle was just a permanent house or a residential tower , similar to the Amorbach Templar House . Over the years, however, the castle was expanded into a moated castle with a high keep and up to seven meters high circular walls with covered battlements all around . The castle had two wide moats. Another, third and natural barrier was the Erf , which still flows around the remains of the castle in a wide arc.

As early as 1374, one of the Riedern inheritors was a fiefdom holder of Kurmainz and was given the right to pledge his share in the Sloßes Rydern . Around 1390, Archbishop of Mainz Konrad II von Weinsberg owned half of the castle.

In 1448 Peter von Riedern sold his inheritance to his brother-in-law Anton von Wittstadt, including accessories . Until 1475, the castle with its various heirs was still in feudal relationship with Wertheim.

In March 1515, the Archbishop of Mainz Albrecht von Brandenburg grants the brothers Asmus, Philipp and Christoph von Riedern a quarter at the Riedern Castle, which their ancestor Philipp von Riedern gave with the consent of the former Archbishop Diether von Isenburg von Georg von Riedern had bought and then had Wendel and Asmus von Riedern in possession. This means that Kurmainz was in possession of the area as early as 1475 . It is possible, however, that the various heirs have given their shares to different feudal lords, which is unlikely but not impossible.

In 1632 it is documented that Hans Kaspar von Herda zu Domeneck and Assumstadt , royal Swedish chief magistrate zu Miltenberg , inherited Riedern Castle and other accessories after the Rieden family died out with the death of Alexander von Riedern in 1588. Because of the charter was an attempt by the Bavarian governor to Heidelberg Heinrich von Metternich , in filling the Kurpfalz the castle as a fief Kurpfälzisches for the Riederner home liked to collect.

Already in October 1589 there was a dispute between Count Ludwig von Löwenstein and Count Dietrich von Manderscheid over half of the Riedern inheritance, "which Diedrich gave his advice to Dr. Johann Koch had transferred to the cross ”.

In 1780 the gatehouse was rebuilt as a Kurmainzisches Jagdschlösschen (later a forester's house), and the keep was also laid down.

On July 1, 1974 the property was incorporated into the municipality of Eichenbühl .

The moat of the moated castle was filled with the water of the Erf . The castle had a mighty late medieval castle wall made of sandstone with supporting pillars and keyhole loopholes and a gatehouse . Building in Tudor style still exist: The barn is a timber-framed building with a gable roof from the 18th and 19th centuries, an outbuilding with small Satteldachbau at the perimeter wall also from the 18th and 19th centuries, now greatly changed. The current house is a single - storey half-hipped roof building on a high basement plinth made of sandstone , assigned to the 18th century. At the property there is a small picture house above a brick table base and a saddle roof niche made of sandstone with the initials MR and the year 1789 .

Castles and palaces in the Miltenberg district

Castles and palaces in the Odenwald