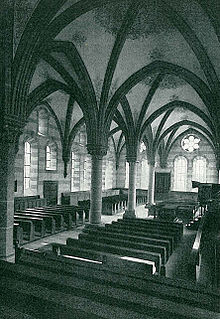 Interior of the refectory (around 1900) 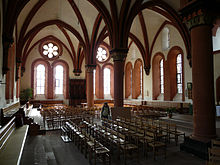 Interior of the men's refectory (February 2009) 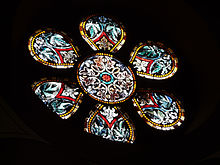 The Schönau monastery in the municipality of Schönau in the Odenwald was a Cistercian abbey founded in 1142 by the Eberbach monastery and existed until it was abolished in the course of the Reformation in 1558. After the Maulbronn monastery, it was the most important monastery in the Electoral Palatinate. Apart from small remains of the mighty monastery church, only the striking monastery gate and the so-called gentleman's refectory , which today serves as a Protestant church, have survived from the large convent complex . The town of Schönau developed into a town by the subsequent settlement with refugees by 1600.

Schönau Monastery was founded by the Diocese of Worms and its Eberbach Monastery in 1142. Worms had owned the southern Odenwald since 1012, but gave it to various nobles as fiefs . Under Bishop Burchard II (also Buggo), the monastery was immediately returned to Worms in 1142 and the monastery was then founded. The Cistercians received from Buggo the wide valley floor of the Steinach valley and a forest adjacent to the south, which was considerably enlarged in 1172 by Bishop Konrad II . Initially there were probably temporary wooden structures that were replaced around 1200 by massive buildings surrounded by a curtain wall.

The monastery complex was designed according to the usual Cistercian monastery scheme: the 84-meter-long church faced east, to the south was the rectangular cloister , to which the conversing house for secular brothers was attached to the west. The south wing of the cloister led to the dining room (today's Protestant town church) with an attached kitchen. There was a fountain hall across from the dining room. The chapter house with the monks' dormitory above was connected to the east wing of the cloister, further east the infirmary. A hospital was also built from 1275 onwards .

In the 13th century about 300 monks lived in Schönau and the monastery was, along with Maulbronn monastery, the most important monastery in the Electoral Palatinate . The subsidiary Bebenhausen monastery was founded in Schönau as early as 1190 . After its founding in 1386, the abbot of Schönau was in charge of the St. Jakob preparatory college in Heidelberg , which all southern German Cistercian students attended. In addition, the Ramsen Monastery , the Neuburg Monastery and the Lobenfeld Monastery were temporarily subordinate to the Schönau Abbot.

The monastery was mainly owned by donations in the 12th and 13th centuries and stretched from Hirschhorn west to beyond the Rhine and north into the Frankfurt area. The monastery had townhouses in Heidelberg, Speyer , Worms and Frankfurt am Main . The Frankfurt external property was given up in the 15th century, but in 1480 the monastery was able to acquire the Wiesenbach provost's office.

As part of the Reformation , the monastery was abolished in 1558 by Elector Ottheinrich . Care Schönau , which still exists today, took over the management of the properties and the landlord rights. The maintenance department gave the agricultural land to farmers and in 1562 settled Calvinist religious refugees from Wallonia (then: Spanish Netherlands ) in the monastery, which meant that Schönau developed into a town by 1600. Although the settlers are said to have been expressly ordered to maintain the monastery complex in 1562, numerous renovations and destruction took place by 1583, so that the monastery complex quickly expanded into the developing city center and only fragments have been preserved.

The history of the Cistercian Abbey of Schönau has not been adequately researched. This is mainly due to the fact that no chronicle of the monastery has been preserved and there is still no complete book of documents. Whoever wants to study the history of the abbey has to refer to a document book from the 18th century ( Gudenus ), which contains most of the documents from 1142 to around 1300. Abbot Johann Schwelm is mentioned in the digitized book Salvation of their Freyheiten ... of the Schönau Monastery. Further documents from Schönau were printed in the “Journal for the History of the Upper Rhine” in the 19th century. The documents of the 14th, 15th and 16th centuries, on the other hand, are still unprinted - despite Schönau's proximity to Heidelberg and its famous university.

Fundamental research on the history of Schönau comes from Maximilian Huffschmid, Robert Edelmaier and Meinrad Schaab (see literature). In particular, Schaab's monograph from the 1960s is still used today, although the book is of course a bit out of date, contains errors, does not take important sources into account and has no index. The Schönau inscriptions were compiled by Renate Neumüllers-Klauser. However, this book from 1970 is also long out of date, as new inscriptions are continuously being excavated on the former monastery grounds.

Altogether, over 1000 documents from Schönau are stored in various state and city archives, especially in the Speyer state archive and the Karlsruhe state archive.

The most important events in Schönau's early history were recorded in the 16th century as drawings underlaid with Latin verses, which are now in the Germanic National Museum in Nuremberg. The drawings reveal a high level of knowledge of the structural conditions of the monastery. It is possible that the large-format (49 × 39 cm) pen drawings are drafts for glass windows.

Hagiographic evidence also provides information about many events in the early history of the monastery . Especially the story of St. Hildegund von Schönau, a young woman who lived unrecognized as a novice Joseph in the monastery in the 12th century, was enthusiastically taken up by the writers of vitals and poets of the late 12th and early 13th centuries. This material was processed a total of five times. a. also from Caesarius von Heisterbach . Another important event, the famous “boot revolt” of the Schönau lay brothers, reports Konrad von Eberbach. The Cistercian monastery in the Odenwald also plays an important role in the biography of Blessed Eberhard von Kumbd: Eberhard, a servant of Count Palatine Konrad von Staufen, tried three times in vain to be accepted into the monastery. In addition, Schönau is often mentioned in Caesarius's “Dialogus miraculorum”.

The term “boot revolt” appears for the first time with Herbert Derwein, who traces the ten drawings (Nuremberg, Germanisches Nationalmuseum, Kapsel 1532, inventory numbers: Hz 195–204) that were made between 1576 and 1600 as copies of originals from the monastery wanted to make his own words known “to wider circles for the first time” in order to simultaneously “create a kind of homeland book”. Konrad von Eberbach uses the term “conspiratio” for the behavior of the conversations, for which the religious law provided severe penalties. The reason for the conspiracy was not the type of footwear for which the term boots is used today, but boot-like and particularly warm night shoes.

In addition, a few occasional poems (mainly epitaphs) have survived from Schönau. Most of the manuscripts of the monastery have been in the Bibliotheca Apostolica Vaticana in Rome since the 17th century.

In December 2008 the cultural history museum Hühnerfautei was inaugurated in Schönau, in which the history of the Cistercian monastery is presented on the basis of numerous finds.

Personalities who worked in the Schönau monastery

Personalities who were buried in the Schönau monastery

Since 2001 it has been possible to take a historical tour through Schönau, which is explained by information boards. If you follow the numbered 28 stations, the 30 information boards, the texts of which were written by Petra Beisel-Autenrieth, give you an impression of the former monastery complex, which suffered considerable destruction soon after the arrival of the Calvinist religious refugees from Wallonia.