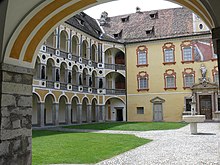 The Hofburg in Bressanone - seat of the Diocesan Museum

The Diocesan Museum Bressanone houses a valuable collection of church art from the Middle Ages and modern times. It is located in the former prince-bishop's residence, the Hofburg , at Hofburgplatz 2 in the South Tyrolean town of Brixen .

After a support association was founded in 1897, the Diocesan Museum was opened on October 27, 1901 in the Türnitz of the Brixen Hofburg. The initial aim was to collect endangered Romanesque and Gothic works of art from the diocese and thus save them from destruction. Although numerous art treasures were already included in the Tyrolean Provincial Museum Ferdinandeum in the 19th century , a large number of exhibits still remained in the local churches that wanted to be preserved.

The original museum rooms were soon too small, and in 1907 they moved to the Bruderhof on the cloister of Brixen Cathedral , where the collection was systematically rearranged. In 1927 the Munich art historians Carl Theodor Müller, Friedrich Kriegbaum and Joseph Clemens Prince of Bavaria carried out a new installation.

The long-time museum director Karl Wolfsgruber , who drew the public's attention to the museum through a series of exhibitions, achieved great merits . In 1973 he was also able to persuade Bishop Joseph Gargitter to make the rooms of the Hofburg that were vacated by the relocation of the bishopric to Bozen available to the Diocesan Museum. After extensive renovation, the remarkable nativity scene collection was opened in 1976 in the former kitchen and storage wing of the Hofburg, followed by the Middle Ages and Modern Times section on the first floor in 1978. Finally, in 1980 the imperial and bishop's wing was opened to the public.

In 2004 the holdings were expanded to include the Siegfried Unterberger Collection on the second floor. As a result, works by Tyrolean artists of the 19th century found their way into the Diocesan Museum.

The art collection of the Diocesan Museum houses medieval sculptures and panel paintings, works from the Baroque , Classicism and Romantic periods , as well as handicrafts such as goldsmithing, stained glass and furniture. The highlights are the late Romanesque Madonnas and images of Christ, the sculptures by Leonhard von Brixen and Hans Klocker , wing reliefs by Jörg Lederer and the three king altar by Bartlmä Dill Riemenschneider , altar statues by Adam Baldauf and oil paintings by Stephan Kessler , Ulrich Glantschnigg , Franz Sebald Unterberger and above all Paul Troger . In the Siegfried Unterberger Collection, paintings by Franz von Defregger , Albin Egger-Lienz , Franz Richard Unterberger and Alexander Koester should be highlighted.

The most important works of art in this department include several Romanesque grand crosses and crucifixes , such as the torso of the crucifix from the Lamprechtsburg (around 1150), the crucifix from Stilfes (around 1250) and the lecture cross from Palatinate in the form of a branch cross . There are also more than a dozen late Romanesque Madonna figures in the museum, such as those from the Brixen Poor Clare Monastery, from Taufers , Kematen , Uttenheim and Tiers . The Madonna from St. George's Church in Vahrn has an iconographic peculiarity , in which Mary, like the Christ Child, raises her hand in blessing.

Gothic sculpture is represented in the museum in greater numbers than contemporary painting. There are several enthroned saints from the 14th century, such as St. Nikolaus from the Bressanone Poor Clare Monastery, St. Ingenuin from Saubach, St. Ulrich from Feldthurns or St. Peter from Aufkirchen. Among the Madonna figures, the one from the Sonnenburg Benedictine monastery (around 1325), in which the Christ child plays with a bird, stands out. Also worth mentioning is the Latsch Madonna (around 1360), whose baby Jesus clasps his mother's chin, a Vespers picture from Neustift (around 1390), a kneeling Mary who belonged to a coronation group and probably came from the circle of Hans von Judenburg Mercy seat in the flowing soft style , and the Madonna with the grape from the Brixen Frauenkirche.

Many of the panels were parts of winged altars, some of them still preserved in association. Scenes from the life of the apostles Peter and Paul and from the Passion of Christ by the master Leonhard von Brixen (around 1460) should be mentioned; a resurrection of Christ by the same artist, which may have served as the front of a holy grave; the Ear Dress Madonna from Ehrenburg (around 1460); the crowning of thorns by the master of Uttenheim (around 1470); a crucifixion panel from the Johanneskirche in Brixen (around 1500), which comes from an altar; an enthroned Madonna (around 1470); an Anna selbdritt (1499) by Marx Reichlich , which was commissioned by Canon Christian Thurner, from the Brixen Frauenkirche; a Man of Sorrows and a Mater Dolorosa by the master of the Neustift Barbara Altar (around 1490); the Marriage of Mary (around 1500), attributed to the master of the Oberfalkensteiner Altar; Madonna with the grape (around 1500); the St. John the Baptist and John the Evangelist by Simon von Taisten (around 1500), former altar wings from St. Johann in Ahrn. The Adoration of the Magi and a series of saints from the fourth arcade of the cloister near Bressanone Cathedral and created around 1415 by Erasmus von Bruneck are among the few wall paintings that have been removed and brought to the museum.

Many of the late Gothic sculptures come from carved altars that were made throughout South Tyrol in the 15th and 16th centuries. Outstanding examples from the Brixen collection are a throne Madonna from the former high altar in Milland (around 1470) by Master Leonhard von Brixen; the kneeling Maria from the high altar of the parish church Maria Himmelfahrt von Kaltern (1498) by Hans Klocker ; a Christmas relief with the Adoration of the Shepherds from Zinggen (around 1490) by Hans Klocker's workshop; Altar wing with scenes from the life of Mary (around 1490) by the workshop of Hans Klocker; Wing reliefs of the Nauders high altar (around 1515) by Jörg Lederer ; Sculptures of the former winged altar of the parish church in Toblach (around 1520) by Michael Parth; Relief with the Adoration of the Magi (around 1525) from St. Magdalena im Moos in Niederdorf by Michael Parth; Johannes Evangelist (around 1470) from St. Jakob in Grissian ; an altar from Meran with Maria, flanked by Magdalena and Walburga , on the outside of the wing a painted Christophorus and Georg by Hans Schnatterpeck .

The museum's collection items are also diverse in relation to sacred arts and crafts. They include lecture crosses , reliquary monstrances , reliquary glasses, chalices , ciborias and liturgical vestments. Examples are: a gilded Romanesque smoke barrel from Tratzberg (around 1200); a Romanesque bronze crucifix from Vinschgau with remains of an enamel mount (around 1200); a late Gothic measuring chalice from Untermol (around 1490), at the foot of which there are images of St. Luzia , a crucifixion and a member of the Flagellant Brotherhood ; a late Gothic tower reliquary (around 1470). The collection also includes several panes of glass , the oldest of which show kneeling donors (around 1350). Late Gothic pieces of furniture are exhibited throughout the museum; for example a sewing box from the Brixen Poor Clare Monastery or a carved wooden beam ceiling from a Brixen town house on the staircase. The most beautiful manuscript in the museum is the Graduale von Taisten (1493), which contains numerous initials as well as a number of pictorial representations.

Foreign artists from southern Germany brought new ideas and styles to South Tyrol from 1500 onwards. Noteworthy exhibits from the Renaissance period are wing panels from the Salvatorskirche in Bruneck (today Ursuline Church ) with scenes from the history of salvation (around 1515) showing the influences of the Danube School ; a Madonna and Child by the Dutch artist Jan Gossaert, called Mabuse (around 1525/30); an epitaph for Matthias Horn with the raising of Lazarus from the cathedral church in Brixen (1539); the three-king altar by Bartlmä Dill Riemenschneider (around 1490–1549) from Würzburg , which was commissioned by Wiener Neustädter Bishop Gregor Angerer, formerly Brixen canon, for a chapel in Brixen cathedral (1545); a plastic crucifixion group from the Jaufenburg Chapel in St. Leonhard in Passeier from the circle of Hans Leinberger (around 1530); the three king altar from St. Georg in Graun (1596) by the Bamberg artist Georg Müller is one of the first columned retables in South Tyrol. 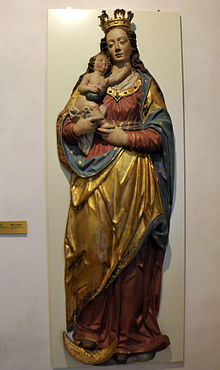 The Diocesan Museum has very extensive holdings from the Baroque period. Examples are a bust of the diocesan patron saint Albuin (around 1600) from Brixen; the central panel of the former high altar of the Brixen Cathedral with the depiction of the death of the Virgin by Hans Schmid from Innsbruck (1600); the sculptures of the rosary altar from the Bressanone Cathedral, depicting the handing over of the rosary to Dominic and Catherine of Siena , by Adam Baldauf (1624); the pictures of the Immaculate and the Assumption of Mary by Martin Theophil Polak for the high altar of the Frauenkirche in Brixen (1638); the changing pictures for the high altar of the Brixen Liebfrauenkirche by Stephan Kessler (around 1645); the panel paintings of repentant Peter and the rest on the run as well as an Immaculate for the chapel of the Hofburg by Ulrich Glantschnigg (1661–1722); the leaves for the Johannes Nepomuk altar in the parish church of Kaltern by Johann Georg Dominikus Grasmair (1728); several altarpieces by Franz Sebald Unterberger .

A separate room in the Diocesan Museum is dedicated to the most important Tyrolean Baroque painter Paul Troger . Here are numerous drafts and sketches for his frescoes, as well as personal devotional pictures on canvas from the Welsberg parish , including a picture of the Mount of Olives (other versions in St. Peter in Salzburg and in the Vienna Belvedere ), a Pietà (another version in the Vienna Museum ) , and a Mater Dolorosa (different version in St. Peter in Salzburg).

The late phase of baroque art in Tyrol is documented by some interesting works of art, including four large sculptures of a columnar altar from St. Barbara in Wengen by Dominikus Moling (around 1750); four angel pictures from the Old Testament ( Hagar and Ishmael , Tobias and the angel, Daniel in the lions' den, angel apparition of the prophet Elias ) by Josef Ignaz Mildorfer (around 1750); two small-format pictures of the death of Joseph and the Holy Family in the workshop in cheerful sensual joy by Joseph Haller (1737–1773) created (around 1760); a painting with the handover of the scapular to St. Simon Stock by Martin Knoller and a four-part cycle with the life of Joseph of Egypt by Carl Henrici (around 1770).

Although the museum does not collect sacred art from the 20th century, it has acquired works by various artists from this period. These include two paintings (Lamentation of Christ and Pietà) by Karl Plattner , a terracotta relief of the Descent from the Cross by Maria Delago , two stations of the Cross made of copper by Martin Rainer , and works by Heiner Gschwendt from Klausen, Hans Plangger (1899–1971), Karl Grasser from the Vinschgau or Rudolf Stolz from Bozen.

Most of the objects in the cathedral treasure are also on display in the Diocesan Museum. This is the inventory that has been accumulated in the sacristy of Brixen Cathedral over the centuries. The most important piece of the cathedral treasure is without a doubt the Albuinkasel , or because of the large eagles depicted on it, also called the eagle chasuble (around 1000). The liturgical robe made of Byzantine silk was probably a donation by Heinrich II. Or Conrad II. To Bishop Albuin von Brixen. In addition, numerous other liturgical vestments are represented in the cathedral treasury. Among the various reliquaries, the late Gothic bust of Agnes is mentioned, as well as an altar cross with rock crystal plates and a lecture cross with gold-plated silver and enamel tones from Constance . Most of the medieval and baroque goldsmith's work comes from workshops abroad.

As part of the Diocesan Museum, a nativity scene collection is shown on the ground floor, which has significant exhibits and multi-figure nativity scenes from South Tyrol and Italy. The core pieces of this collection are the Probst brothers' annual crib as well as Franz Xaver Nißl's Christmas and Lent Crib from around 1800, which illustrate the salvation event in many individual scenes and thousands of figures.