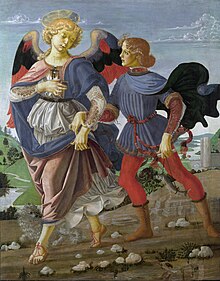 Tobias and the Angel (Verrocchio) 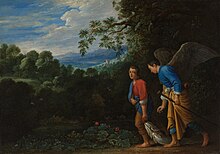 Tobias and Raphael return home with the fish

Tobias (Hebrew “The Lord is good”) is the son of Tobit in the Book of Tobit , one of the late writings of the Old Testament .

Tobias in the book Tobit

The old Tobias (Tobit) remained true to his god in the Assyrian captivity at Nineveh and was characterized by charity . Even in exams he did not lose his trust in God. His son, the young Tobias, was accompanied on a journey by Archangel Raphael, protected and introduced to his future wife Sara ( Edna's daughter). A dog also accompanied and protected young Tobias.

Father and son lived to a great god-blessed age.

In Roman Catholic Bible translations , a distinction is made between the father Tobit and the son Tobias by name. In Protestant translations such as the Luther Bible , the Hebrew name Tobias is used in both cases .

Tobias is often depicted in iconography as a traveler, accompanied by the archangel Raphael or when the archangel says goodbye to the family of Tobias. He is the patron saint of pilgrims, travelers and those suffering from the eyes. Remembrance day is September 13th .

His father Tobit is portrayed burying the dead or being cured of his blindness (by fish bile). Tobit is the patron saint of the gravedigger.