from Wikipedia, the free encyclopedia
i16

Friedberg's first station was at 165.4 kilometers, a little further north than the current facility. The building site was acquired by Deutsche Bahn in 1847. For the construction, part of the existing city wall had to be removed and the area to the east had to be filled in. The station was designed as a through station. The construction plan for the station building came from the engineer Peter Hochgesand (1818-1896) who later became station inspector in Friedberg. The classical building was built on two floors. The inaugural train, coming from Frankfurt am Main , reached the station on March 11, 1850 at around 11 a.m., and scheduled operations began on May 10, 1850. On November 9, 1850, the section of the Main-Weser Railway from Friedberg to Butzbach followed . The entire route of the Main-Weser Railway from Kassel to Frankfurt has been used since May 15, 1852.

In Friedberg, further lines were connected to the Main-Weser-Bahn: On September 15, 1881, the Friedberg – Hanau line was put into operation here, after it had run to the Heldenbergen-Windecken station (today Nidderau ) since December 1, 1879 could be. The Friedberg – Mücke railway followed on October 1, 1897, and the Friedberg – Friedrichsdorf – Bad Homburg railway on July 13, 1901 , the latter also known as the Bäderbahn . Friedberg thus became a hub for travelers and goods. However, this also meant that the operational facilities of the station became too narrow for the increasing traffic.

Since an extension was not possible because of the hillside location at the old location, the new station was built about half a kilometer south - and thus out of town. On the night of August 9th to 10th, 1913, the second Friedberg station went into operation and the first was abandoned.

As early as 1897/98, a prince's pavilion , a separate reception building for the Grand Duke of Hesse and his guests, was built south of the reception building. These included Tsar Nicholas II of Russia and his family, who spent their summer holidays at Friedberg Castle in 1910 . The prince's pavilion is designed as a half-timbered building and was later moved to the new train station.

During the First World War , the old station building served as a barracks . In 1920 apartments were built there. It existed in this form until 1983 when it was demolished for the construction of a new car park .

The second Friedberg train station went into operation on August 10, 1913. It largely exists in this form to this day.

On September 28, 1923 , the diverted P 1009 derailed in the station area due to a switch that was changed prematurely, "because of intervention by the director. Two people died, 16 were also injured.

During the Second World War , the station was the target of air raids by the Allies . B. December 4, 1944.

Friedberg (Hessen) station has two house platforms and four island platforms with a total of ten platform edges. The one house platform (track 1a) is a stump track south of the reception building, which is used exclusively for local trains in the direction of Friedrichsdorf .

Tracks 2 and 4 on the first island platform are the continuous main tracks of the Main-Weser-Bahn. The S-Bahn mostly uses tracks 5 and 7 on the second island platform. At certain times of the day, these tracks are occupied by parked S-Bahn multiple units, so that platform 1 or the main tracks of the Main-Weser Railway are used for some arrivals and departures of the S-Bahn. So that the main tracks are not blocked, the trains in question continue to run as empty runs (without passengers) to Bad Nauheim, in order to turn around in a siding there.

The trains in the direction of Hanau Hauptbahnhof usually depart from the penultimate island platform (tracks 8 and 10). The trains from the Friedberg – Mücke line towards Nidda and Wölfersheim-Södel leave from the platform furthest to the east (tracks 11 and 12) . The tracks 3, 6 and 9, which are not mentioned, are butt tracks which are located according to their number and which have since lost their platforms.

The island platforms are accessed through an underpass with stairs, there are no elevators. The previously existing baggage conveyor belts on the stairs have been removed. Originally, the renovation of the traffic station was planned for 2017 (underpass, installation of elevators, backfilling of the luggage tunnel, handicapped-accessible expansion, modernization of platforms, tracks 1 to 10 - the last platform is only to be renovated in the course of the four-track expansion Friedberg - Bad Vilbel), but was then opened Postponed 2020 and should cost € 20 million. Since test bores at the beginning of 2020 found that the subsoil in the area of ​​today's underpass is not strong enough for the elevators, a new underpass has to be planned at a different location. The renovation will therefore be divided into two sections, from August 24, 2020 the platforms will be renewed (roofing, electrics, drainage, tactile guidance system, loudspeakers, DFI displays). The DB does not expect the construction of the new underpass to start until 2024 at the earliest, which could then be extended to the east of the tracks at the city's expense.

Between October 17 and 26, 2015, after a long period of preparation, these were replaced by a Thales-type electronic interlocking , but are structurally still in place. The Bad Nauheim and Assenheim (Oberhess) stations as well as the route block of the adjacent routes are included in this signal box. On February 5, 2017, on the route towards Hanau, there was a high voltage flashover in the electronic systems of the new interlocking, after which it was out of service for several days. Since neither switches nor signals could be operated, temporary fixed routes had to be set up as an emergency solution , which allowed one train journey per hour and direction on the main tracks of the Main-Weser Railway, and later two train journeys by command . From Friedrichsdorf and Beienheim there was one train ride per hour and direction. While operations on these three lines were again possible without restrictions on February 9, the repair of the tracks on the Friedberg – Hanau railway line continued, so that no train operation was possible between Friedberg and Nidderau until mid-March. As a result, during this period, line RB 49 only ran between Gießen and Friedberg and between Nidderau and Hanau according to a temporary replacement schedule.

To the east of the platforms is a larger track field that is used for freight traffic and has another 12 track axes. In the past, the train station had a considerable amount of sugar beet traffic from the surrounding cultivation area, the Wetterau , which led to the Friedberg sugar factory working here . These goods facilities are rarely used today. The northern exit of the Main-Weser-Bahn station led directly to the Rosental Viaduct , which was replaced in 1982 by a modern concrete bridge a few meters to the east.

Until October 1, 1982, there was also the Friedberg (Hess) depot south of the platforms . After it was given up as an independent department of the Deutsche Bundesbahn , it was continued for a while as a branch of the Frankfurt 1 Bahnbetriebswerk , downgraded to a base in 1984 and given up in 1999 at the latest. 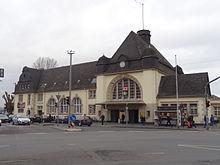 The current station building was built in 1912–1913 in a mixture of neoclassicism and neo-renaissance by the Darmstadt government building officer Krause under the influence of Armin Wegner . In the vestibule , original ceramic paneling and designed glass windows have been preserved, which are influenced by Art Nouveau .

In the course of the economic stimulus programs, the reception building was energetically renovated and repainted in 2010 by DB Station & Service AG for 600,000 euros. It houses a DB travel center, a book and magazine store, a baked goods stand, a self-service baked goods shop (with seating), a McDonald’s branch (since February 2011 in the former luggage area) and, since April 2018, public toilets on platform 1. 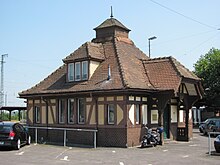 The second Friedberg train station also kept the Prince's pavilion. He was moved from the old train station to a location north of the new reception building. Today the small building is used as an office and social room by the Hessian State Railway.

An ICE line 26 from Hamburg to Karlsruhe stops at Friedberg (Hessen) station every two hours . Schwerin is served by two pairs of trains . A pair of trains runs as an Intercity to Westerland .

Between December 2009 and December 2011 also a daily perverse € City -Zugpaar of victories over Munich to Klagenfurt with coaches to Zagreb .

All regional trains stop at Friedberg (Hessen) station, with the exception of a few HVZ repeater trains. These are the regional express trains Frankfurt Hbf - Siegen ( Main-Sieg-Express ) and Frankfurt Hbf– Kassel Hbf (Main-Weser-Express), the Mittelhessen-Express , the trains on the Hanau – Gießen route and the HVZ direct trains the route Nidda-Frankfurt Hbf. It is also the start and end point of the HLB trains to / from Friedrichsdorf, Wölfersheim-Södel and Nidda.

Since May 28, 1978 Friedberg station has been served by the S6 of the Rhein-Main S-Bahn , which ends here.