Bifurcation of the rabbit (left) and Else (right) near Melle 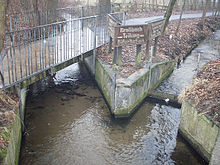 A river bifurcation or river bifurcation is the branching (fork) of a flowing body of water in such a way that its water flows into two different river systems . The watershed is interrupted at the fork by the branching watercourse, so that part of the runoff passes from one catchment area to another. The word comes from Latin bi- "two" and furca "the fork".

In the English-speaking world, notwithstanding one of this importance, often each branch or fork riverbed in creeks , as well as the part runs a anastamosierenden river called "bifurcation".

Permanent bifurcations
are active at practically every water level .
Periodic or ephemeral bifurcations
become active as an “overflow” only from a certain water level. For example, during floods in the Minnesota Lake District, the Mississippi system connects with the Red River and Lake Superior .
Underground bifurcations
occur in karst areas in phreatic or active vadose caves (water caves). A well-known example is the sinking of the Danube with an underground connection to the Aachtopf and thus to the catchment area of ​​the Rhine .
Pseudo-bifurcations
occur when stagnant water bodies such as swamps or lakes drain to several different river systems. Pseudo because here no actual current is split up, but a basin has several drains. Many pseudobifurcations in Central Europe owe their existence to glacial valleys : In the post-glacial period, the direction of the flat valley floors of the glacial valleys dictated the direction of flow for the waters. However, where the gradient was very low or where the glacial valley (due to postglacial processes) even had an apex, instead of flowing, standing water or bogs often formed. As soon as these drain into the glacial valley on both sides, there is a pseudobifurcation.
Diffluence
is called a bifurcation in glaciers  - in contrast to confluence , the confluence. In the flowing water currents within the glacier, the shapes of water caves also appear.

There are also numerous artificial bifurcations for supplying water to irrigation areas, cities and shipping canals as well as in power plant construction. Here, hydrographically significant amounts of water can be transported.

Bifurcation of the Nerodimka (Nerodimja) in Kosovo; with both directions of flow on signs: Deti i Zi ( Black Sea ) and Deti Egje ( Aegean Sea )

In the Peene system there are many pseudobifurcations not only in glacial valleys .