Suevite from the Nördlinger Ries (type locality). The dark impact melts can be clearly seen in the handpiece. 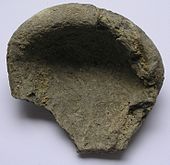 "Flädle" from the suevite ( Nördlinger Ries ). The handpiece has the characteristic bead on the edge.

Suevite is an impactite , a rock that was formed by the impact of a meteorite . In addition to ground rock and melts that have solidified to form impact glass, suevite typically contains some minerals that only form at extremely high pressures and temperatures, such as stishovite , coesite and diaplectic glasses . Remnants of the impactor can also be included. Originally, the suevite was described in the Nördlinger Ries , from which the name Schwabenstein is derived from the Latin Suevia for Swabia . Today suevites are also known from numerous other impact craters .

Suevite in the Nördlinger Ries

The suevite was first described in 1792 by the engineer Carl von Caspers under the name fire scent stone . Caspers used in the expansion of the rock fortress Ingolstadt as trass for the production of waterproof cement . In 1919, the geologist Adolf Sauer derived the name suevite from the Latin suevia for Swabia for the rock, which at that time was only known from the Ries . For a long time, suevite was regarded as a volcanic rock, similar to tuff . It was not until 1960 that the formation of the Ries crater, and thus also that of the suevite, could be explained by an impact. The high-pressure minerals stishovite and coesite found in suevite played a central role. It was also possible to date the impact to an age of 14.3 to 14.5 million years by examining the fused glass and moldavites .

During the Ries event around 14.4 million years ago, the explosive evaporation of the meteorite and the surrounding rock ejected large amounts of crushed rock and molten rock.

In 1981 Günther Graup first found terrestrial chondrons in the suevite of the Ries crater, which have structural similarities with meteoritic chondrules. Since the formation of the lunar and meteoritic chondrons has not yet been clarified, the formation during meteoritic collisions seems to be a possible explanation. In 1999, Günther Graup described structures from the ejected suevite for the first time, showing that large amounts of carbonate melts (up to 50% by volume) formed from the Malm limestone of the impact area during the impact. The glasses ("Flädle") stored in the suevite were formed from the Mesozoic claystones from the impact area. Petrographic data show that the fine-grained matrix also consists to a considerable extent of thermally altered sediments. Several findings (e.g. grain size distribution, regulated components, fine-grained base stuff, degassing channels) show that the ejection mechanism is similar to that of a pyroclastic flow (ignimbrite). The melting glasses stored in the suevite testify to temperatures of up to 1950 ° C. The evidence of several metastable high-pressure modifications and petrographic findings shows that the suevite cooled down quickly.

Drilling in the Ries has shown that the Ries crater is filled with suevite up to 400 meters high. This relapsed uevite was later covered by sediments from the lake that formed after the impact and is therefore no longer accessible on the surface. In the vicinity of the Ries, however, ejected suevite can be found in isolated deposits with an area of ​​up to one square kilometer and a thickness of up to 25 meters. This always rests on the masses of colorful debris ejected from the ream . From this it can be concluded that the suevite was deposited from the glowing cloud of the impact after the ballistic ejection of the debris from the crater was completed. About 150 cubic kilometers of rock were ejected, and rocks were found at a distance of up to 450 kilometers (locations were e.g. in Prague).

In the case of superficial suevite deposits, the glass bombs stored in the base material occasionally smell out and can then be picked up as isolated finds. Because of the shape that these impact glasses received when they were thrown into the air in a viscous state, they are also popularly known as flädle .

Since the porous suevite is easy to work with and also has excellent insulating properties, it has been used as a building block in the vicinity of the Ries since Roman times . Numerous buildings made of suevite, including the Nördlinger St. George's Church with its 90 m high Daniel tower or the Niederhaus castle ruins , bear witness to this. Since suevite is attacked by increasing air pollution and is naturally very porous, restoration work on the historical building stock is now being carried out with a deceptively similar artificial stone to which small amounts of natural suevite are added.

Ground suevite (so-called Ries-Trass) has been used as an admixture to cement since Carl von Caspers described the “fire scented stone” above. Suevite is still used today for certain special cements ("trass cement"), so that it is industrially mined in some quarries .