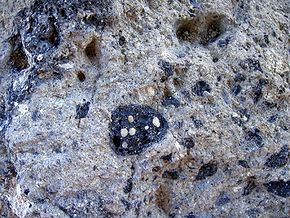 The suevite, an impact rock from the Nördlinger Ries

Impactites are rocks that are formed when a meteorite impacts ( impact ), as the strong mechanical forces (high pressure ) and high temperatures that occur in the process change the terrestrial rocks at the location of the impact. These existing rocks are smashed, among other things, new minerals are created through remodeling and rock can be partially melted and then cool again as impact glass . New minerals characteristic of impactites are, for example, the silicon dioxide varieties stishovite and coesite , which can only be formed under high pressure.

The process that leads to the formation of impactites is known as shock wave metamorphosis .

Impactites with characteristic high-pressure minerals are, among other things, evidence that a certain structure of the earth's crust is an impact crater . In Germany, the Nördlinger Ries is the most famous impact crater with impactites such as suevite .