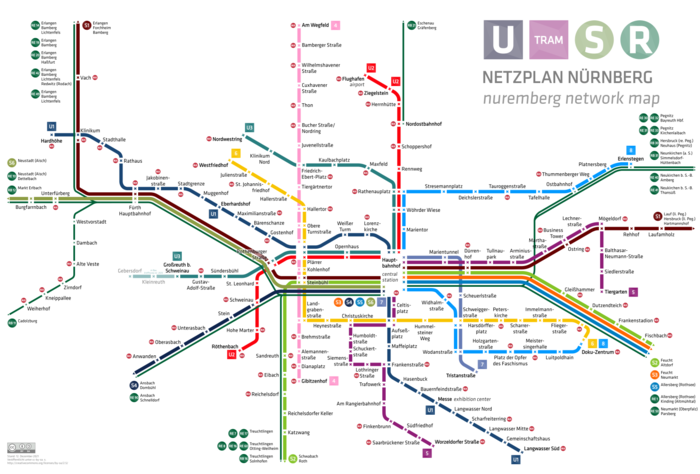 The transport association covers the entire administrative region of Middle Franconia as well as parts of Upper and Lower Franconia , Upper Palatinate , Swabia and Upper and Lower Bavaria . There is also a stop in Baden-Württemberg (Michelbach an der Lücke, line 817).

In the Zweckverband Verkehrsverbund Großraum Nürnberg (ZVGN) are the independent cities of Amberg , Ansbach , Bamberg , Bayreuth , Erlangen , Fürth , Nuremberg and Schwabach as well as the districts of Amberg-Sulzbach , Ansbach , Bamberg , Bayreuth , Erlangen-Höchstadt , Donau-Ries , Forchheim , Fürth , Haßberge , Kitzingen , Lichtenfels , Neumarkt in der Oberpfalz , Neustadt an der Aisch-Bad Windsheim , Nürnberger Land , Roth and Weißenburg-Gunzenhausen are represented. Parts of the districts of Eichstätt , Kelheim , Neustadt an der Waldnaab and Regensburg are also located in the network area, but are not represented in the administration of the network.

Class 642 in the northeast train station

The main means of transport in the transport association are the regional trains and S-Bahn trains operated by Deutsche Bahn AG , the underground trains, trams and buses operated by the Verkehrs-Aktiengesellschaft Nürnberg (VAG) and the Frankenbus rail bus company, as well as numerous bus routes operated by municipal and private transport companies.

The lines are numbered with an R and a consecutive number, starting with 1 in a clockwise direction, branch lines have a two-digit number based on the number of the main line (e.g. R11 ) from which they branch off.

S1 between Nuremberg and Fürth

S-Bahn-Nnetz Nürnberg as a line band 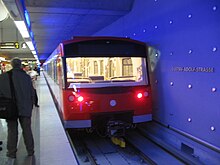 Nuremberg underground network as a line

VAG is the operator of the Nuremberg U-Bahn , which runs on three lines in Nuremberg and Fürth. On the 37.1 km route network, the underground transports an average of 410,000 passengers between the 48 stations every day.

The VAG operates the Nuremberg tram , which currently runs on five lines in the city of Nuremberg. The tram network has been continuously reduced in size over the last 30 years, especially as part of the construction of the subway. In the meantime, the construction of new tram lines is being considered again. B. in the district of Kornburg or in the north towards Erlangen .

In terms of numbers, buses are the most common means of transport in the VGN. In addition to the city transport systems in Amberg, Ansbach, Erlangen, Forchheim, Fürth, Herzogenaurach, Schwabach, Roth, Neumarkt and Nuremberg, there are numerous regional bus routes operated by the DB Frankenbus and DB Busverkehr Bayern rail bus companies, and by DB Ostbayernbus in the Upper Palatinate districts of DB Ostbayernbus and private bus companies .

The bus routes in the VGN are numbered consecutively and are structured geographically. Nuremberg city traffic has two-digit numbers (e.g. 45 Ziegelstein - Frankenstrasse), the Lichtenfels district four- digit numbers . All other lines in the VGN have three-digit numbers, with the first digit each covering a large sub-area and the second digit then, if possible, referring to a smaller sub-area. In the district of Neumarkt or the south-eastern network area, for example, all lines begin with 5xx ; the numbers 56x and 57x are then reserved for Neumarkt city traffic, e.g. B. 563 Neumarkt train station - Altenhof.

The network area is divided into zones and sub-zones, which start in segments from the Nuremberg, Fürth and Erlangen tariff areas. There are a total of ten tariff levels for single tickets and nineteen for season tickets. There are also tariffs for the time zones in which sub-zones are considered separately. Of these, the highest is 10 for single tickets and 10 + T (10 zones + sub-zone) for time tickets. In larger cities there are city tariffs with the designations A to FZB in the cities of Nuremberg, Fürth and Stein (tariff zone 100 and 200, price level A) or Erlangen (tariff zone 400, price level C).

The range of tickets includes single and multi-trip tickets ("Streifenkarte"), day tickets and time tickets ("MobiCard" and "Solo31") as well as subscriptions for schoolchildren, trainees, students and companies. In cooperation with various institutions in Nuremberg, Fürth and Erlangen, a KombiTicket is offered which, for example, enables you to travel to and from a theater performance or a football match with the event ticket you have purchased.

As part of a project for the development of traffic in the city ​​of Erlangen with the participation of the citizens to help shape public transport, the pricing for short distances and the lack of a dedicated offer for senior citizens were criticized.

On June 1, 2006, the Association of German Transport Companies , the VGN, the VAG and other transport associations and companies and partners from the industry signed a contract to develop an e-ticketing process . The start of a model test was planned for mid-October 2006: passengers should be able to buy single and day tickets for public transport with their mobile phones . The different operating systems of the Java-enabled cell phones posed a problem. Since April 26, 2007, it has been possible to purchase tickets with a cell phone in the VGN area ; only single tickets and day tickets are offered during the test.

The 2013, 2014 and 2015 annual timetables were published as a two-volume timetable book with the following subdivision:

There was a timetable slipcase for the two volumes.

Up until the 2012 annual timetable, the entire network timetable was available in a one-volume timetable book.

The following public and private companies are shareholders in the transport association:

Other transport companies in the VGN (selection)

History of the association

Development of the VGN network area

The idea of ​​a joint transport and tariff association in the Nuremberg / Fürth / Erlangen region based on the model of the Munich transport and tariff association and the Rhine-Ruhr transport association came up in the 1980s. A preliminary stage to the transport association was set up on January 28, 1978 with the transport association for the greater Nuremberg area. There was a transitional tariff for the local trains of the DB (then called N-Bahn ) on the four S-Bahn routes planned at the time to the Nuremberg U-Bahn . The first step towards its realization was the signing of the basic contract on December 19, 1986 by the mayors of the cities of Ansbach, Erlangen, Fürth, Nuremberg and Schwabach, the district administrators of the districts involved and the representatives of the Federal Republic of Germany and the Free State of Bavaria. The second step took place almost exactly one year later when the network came into effect on September 27, 1987, one day after the S-Bahn to Lauf (left of the Pegnitz) went into operation. At that time, the network area covered an area of ​​4,593 km² and extended to Ansbach, Neustadt an der Aisch , Forchheim , Neuhaus an der Pegnitz , Neukirchen near Sulzbach-Rosenberg , Neumarkt in the Upper Palatinate and Weißenburg in Bavaria .

The network area was expanded in 1992, 1993 and 1996 through the integration of further communities in the districts of Ansbach, Forchheim, Neumarkt in der Oberpfalz, Neustadt an der Aisch-Bad Windsheim and Weißenburg-Gunzenhausen. The largest expansion to date took place on June 1, 1997, when the mostly only partially integrated districts were completely included and the network area increased by 80% to 11,358 km². In 2005, the southern part of the Bayreuth district with Pegnitz was included in the network area, and in 2007 further communities in the Kitzingen and Donau-Ries districts were added. On January 1, 2010, the district and the city of Bamberg, the rest of the district and the city of Bayreuth and the communities in the Haßberge district on the railway line to Ebern were included in the association.

A few years ago there were plans to include the partially integrated district of Kitzingen completely in the VGN. Talks about integration into the VGN were held with the city of Weiden and the districts of Neustadt , Tirschenreuth , Wunsiedel and Eichstätt (northern part).

Refusal to join the VGN

Transport associations in the Free State of Bavaria