A city ​​bus or city bus is an omnibus that is specially designed for inner-city regular transport .

Even trolleybuses based constructively on city buses, but taking account of their contact line depending on a special legal status. 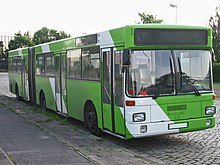 The first omnibuses were not very differentiated according to specific purposes. Except for the designed for urban regular service double-decker buses with their designed in the 1920s, low-frame - chassis (and Eindeckbussen derived from it), the buses of the used for city driving differed until after the Second World War coaches mainly only through other doors (only sliding , later folding doors ) and less luxurious furnishings. New designs specifically for city traffic did not appear until the late 1950s.

The time of the standard buses

In the post-war period, a large number of bus manufacturers competed with very different models. The transport companies resisted the loss of profitability caused by the very heterogeneous bus fleets and suggested the introduction of a standard bus type. In Germany, the Association of Public Transport Companies (VÖV) developed the standard bus I in cooperation with the most important bus manufacturers until 1968. When a new development became necessary, the standard bus II was designed. Under pressure from engine suppliers, some manufacturers had to refrain from their standard bus development and offered own city bus concepts (e.g. Kässbohrer Setra ), but they only played a minor role on the market.

In the Netherlands , standardization also took place in the 1960s, where the bus body manufacturers Hainje (CSA Stadsbus) or Verheul and Den Oudsten (Standaard Streekbus / Regionalbus) were involved.

The time of the low-floor buses

Auwärter Neoplan presented the first “modern” low-floor bus (first generation) with the N 814 in 1976; however, only a few copies could be sold. After Kässbohrer had presented another, less successful pioneer in 1984 with the Setra S 300 NC, Auwärter Neoplan tried a second attempt in 1987 in cooperation with the Munich municipal utility and set a stormy development in motion. The Neoplan low-floor bus presented at the time was a further development of the standard bus II. The low-floor buses manufactured by Daimler-Benz and MAN between 1988 and 1997 were also based on the standard bus II. From 1997, manufacturer-specific solutions were again established as the third generation of low-floor buses; since most of the previous (German and Austrian) manufacturers have now disappeared or been taken over, the German market for city buses has essentially been divided between two groups; thus the argument of standardization is no longer attractive. The manufacturers are more concerned with offering their own concepts and innovations. Modern city buses are characterized by inviting interiors and rationalized technology (e.g. through CAN bus systems).

Since low-floor technology is expensive, a new trend has recently emerged in view of the tight public purse : the low-entry bus , in which only the front end has a low floor, but the rear end can only be reached via steps.

According to floor level 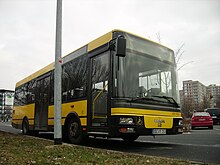 City buses are primarily optimized for two requirements: high transport capacity and fast passenger changes, the former for reasons of economy, the latter in order to keep standing times at the stops short.

City buses usually have more standing than seats, because more of them can be accommodated in a given area. In contrast, the loss of comfort and the reduced permissible speed are less significant on short journeys. In Germany, standing room is usually expected to be four per square meter. A typical twelve meter long city bus has about 70 standing places. Handrails are provided for standing passengers. In newer vehicles, they are usually curved, while handles are no longer common. Usually, special parking spaces for wheelchairs and strollers are provided in city buses, for which purpose these have been provided with wheelchair backrests in recent years.

The number of seats in city buses is now rather small, typical twelve-meter city buses have 20 to 40 seats. While upholstered benches or bucket seats made of hard plastic were still common in the Standard Bus I, thinly padded individual seats with hard-to-destroy velor covers have now established themselves. The face-to-face arrangement in the area of ​​the wheels was typical for city buses. An important goal in the design of the seats is the prevention of vandalism: In recent years the so-called conference arrangement in the rear has emerged. Occasionally seat covers are used with "wild" patterns on which graffiti and tags are less noticeable. Attempts with vandal-resistant wooden seats were less successful.

In the early days were for electric motors and gas engines initially particularly gasoline engines spread. Diesel engines in particular have been used since the 1930s . Initially, the engines were located in the front of the bus. Later, the underfloor arrangement prevailed, initially between the axles and later in the rear. Today, engine outputs of around 200 to 300 hp are common, with articulated and double-decker buses up to 400 hp. The diesel drive is still the most common.

Since around 1980, the engine of articulated buses has mostly been located in the rear of the rear end of the vehicle, whereby the articulation angle control developed by the FFG in the mid-1970s achieved better driving stability. In such articulated sliding buses , automatic transmissions were common from the start so that the shift cables did not have to be guided through the joint. Automatic transmissions have been used in city buses since the 1950s; however, they did not gain acceptance until the 1980s.

In the 1990s in particular, many cities relied on low-emission natural gas buses , externally recognizable by the tank structures on the roof. For some years now, the use of natural gas buses has been declining again, which is due to the higher cost price as well as changes in fuel costs and taxes. Biogas and ethanol propulsion are particularly common in Scandinavia . The hybrid drive is only just beginning to establish itself. Hybrid buses can now be found in trial operation in numerous German cities: from 2005 Munich and Nuremberg 2006 with a vehicle from the MAN brand and since 2007 Dresden and Leipzig with vehicles from the Solaris brand were the pioneers ; meanwhile other cities and manufacturers have followed suit.

In the past, high-floor versions dominated city buses . Since the 1990s, however, almost only low-floor buses with a floor height of approx. 32 cm above the road surface have been ordered in Germany for city traffic , as they are handicapped-friendly and enable faster passenger changes. The middle floor construction could not prevail in Germany. In Germany, however, the engine is usually arranged under the floor in the rear of the vehicle, even in low-floor vehicles, so that the central aisle rises approximately from the center of the vehicle. 100 percent low-floor buses in which the engine (usually in the rear) is positioned to the side are less common, but this usually results in a loss of usable space. Such vehicles often have a third door in the rear.

The low-entry buses , which combine the front section of a low-floor bus with the rear section of a high-floor bus, are enjoying growing success , with the rear part of the interior being reached via steps. In the Anglo-Saxon region in particular, these buses are the standard in the single-decker area.

Inward-opening pivoting doors are still widespread despite their disadvantages, since the opening and closing of the outer pivoting doors, which are used especially in regional buses , take significantly longer. The swing-and-slide doors, which have also been used in public service buses for a number of years and combine the advantages of both other designs, are, however, more expensive, so that nowadays inner swing-doors are often used at the front and swing-slide doors at the rear. For wheelchairs, integrated, manually foldable ramps are provided in the bus today. Motorized retractable versions could not establish themselves due to cost and maintenance reasons; because if dirt or moisture gets into the suspension of the ramp, it often no longer works properly, can no longer be retracted and the journey has to be interrupted.

In addition to manufacturer-specific solutions, most bus manufacturers offer driver workstations in accordance with the VDV guidelines. This includes, among other things, the arrangement of the controls on the dashboard . In most of the vehicles in use today, the bus has an on-board computer , where the driver can call up information on the route and timetable and sell tickets using a keypad or touchscreen . The position of the vehicle determined by GPS or radio-based location systems can be passed on to the control center via mobile radio. Furthermore, there is usually a cash box at the driver's workplace in which the income from ticket sales is transported.

City buses are equipped with destination displays . In the past, these were attached boxes that contained clip-on signs or roller bands ; today you can mostly find LED or matrix displays behind front, side and rear windows. Newer vehicles are often also equipped with passenger information systems in the interior. The outside of the vehicles are often covered with advertisements to give the operators additional income. It is said, however, that the practice of pasting over the side windows with full advertising is not very beneficial for the reputation of city buses among passengers, which is why it has been abandoned by some transport companies in recent years . Others take the opposite route and wrap their buses in full advertising, in which the windows are also pasted - however, the perforated film used for this considerably hinders the passengers' view of the outside. An insight, for example to estimate the space available in the bus (also for a stroller or a bicycle), is also no longer possible.

The German market is dominated by the German manufacturers EvoBus ( Daimler ) and MAN . The Polish manufacturer Solaris has achieved some success among importers in recent years . When it comes to midibuses, Göppel, with its bodies on MAN chassis, is one of the most important providers.

The most important models on the market are currently (in order of distribution):

From 1968 to the 1990s, the standard bus lines were the most common in Germany and are described in more detail in the VÖV bus article . 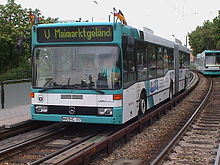 A further development of the classic freely steerable city bus is the so-called track bus , also known as the bus train . The vehicles are steered by means of a mechanical or optical forced guidance and drive in a clearly defined lane. Some of the lines are also electrified, in this case they are O-gauge buses.

Wikivoyage: With the public bus through Germany  - travel guide