Schnaittenbach is a town in the Upper Palatinate district of Amberg-Sulzbach, about 75 km east of Nuremberg . 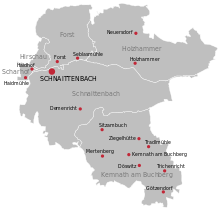 Districts of the city of Schnaittenbach

Schnaittenbach has 16 districts (population in brackets): 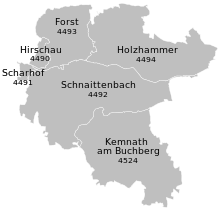 Landmarks of the city of Schnaittenbach

No written evidence is available about the early days of the Schnaittenbach settlement, especially when it was founded.

A trade route ran from Kösching (Roman fort) via Velburg, Pielenhofen, Rensbach, Heimhof, Erlheim, Amberg , Aschach, Schnaittenbach, Luhe , and on to Floß, Tirschenreuth and Eger as early as pre-Roman times . A settlement is likely to have arisen early on at the point where this ancient and largely disappeared road crossed the Ehenbach. It was probably an expansion or clearing settlement that was created on a Grenzbach ( sneite : border) and existed long before it was first mentioned.

On April 23, 1271 Schnaittenbach first appeared in a document. In the document with which the Counts of Ortenburg - Murach sold their rights and possessions around the Buchberg to the Wittelsbach Duke Ludwig II, the village of Schnaittenbach, consisting of the two districts of Obernsneitenbach and Nidernsneitenbach, is also mentioned. The two districts were named after their location on the Ehenbach. Among the places sold were Sitzambuch, Mertenberg, Döswitz and Trichenricht, which are now part of the urban area.

In 1285 Schnaittenbach was mentioned for the second time and from this we learn that there were two farms in Obernsneitenbach and nine fiefs and a mill in Nidernsneitenbach, which later appeared under the name Angermühle . The previous district of Nidernsneitenbach had taken the name Sneitenbach again in the last-mentioned document, from which it arose.

Around 1313 the two districts merged to form the market Schnaittenbach. The market rights granted by the Wittelsbach dukes were linked to the magistrate's constitution, market jurisdiction and the high or blood jurisdiction, which was completely unusual for a market and which the market had in the late Middle Ages, but could not maintain and ultimately lost to the district judge of Amberg. From this time on, the Schnaittenbach judge only had the right of first access and first interrogation; after two days the delinquent had to be extradited to the district judge in Amberg.

The Hammergut Unterschnaittenbach , mentioned in a document for the first time in 1398 , which was sold by Count Palatine Rupprecht II to Hans den Kastner von Amberg, has always remained a separate community politically. Contrary to popular assumptions, it was not identical to Nidernsneitenbach.

The parish church of St. Vitus was redesigned in Baroque style around 1712 as part of an expansion.

The market Schnaittenbach was fortified with a wall ring. The fortification consisted of half a meter thick, approximately four meter high circular walls that met the Great Pond in the north. Three gates originally sealed off the market, the Obere or Hirschauer Tor in the west, the Untere Tor in the east at the Heldmann / Poppenwastl property and the Lohtor at the end of the Rosenbühl in the south. A devastating fire in 1817, which destroyed 79 houses and 49 barns of 96 properties, also meant the end of the fortification of the market. In 1830 "a great water" came, the market square was flooded two feet high. The pond dam near Forst tore and was not rebuilt, mills and houses were damaged.

At the end of the 18th century, Schnaittenbach was still in a hopeless economic situation, according to documents, and in 1802 the magistrate complained that the citizens did not want their sons to learn a craft, but only relied on agriculture. There were more than 60 tradesmen and craftsmen in the village in 1805, such as wood turners, weavers, stocking knitters and red tanners.

It was a stroke of luck for Schnaittenbach when in 1833 the penniless accountant Daniel Christoph Eduard Kick built a kaolin factory in the barn of the lion host Johann Popp and thus founded the Upper Palatinate kaolin industry. The construction of the Amberg – Schnaittenbach railway in 1898 further encouraged development.

After the two world wars, the market experienced a great boom, especially after 1945 (at that time Schnaittenbach had a little over 1,800 inhabitants) due to the large number of people who were displaced and new business establishments, for example the company Kerb-Konus. This led to Schnaittenbach being elevated to the status of town on October 24, 1954 by the then Interior Minister Wilhelm Hoegner .

The urban area of ​​Schnaittenbach has expanded considerably, beginning on October 1, 1938, when the previously independent municipality of Forst (with Unterschnaittenbach) was dissolved and incorporated into Schnaittenbach. In 1946 Demenricht and a wooden hammer followed on the right of the Ehenbach (castle).

As part of the regional reform in Bavaria , on April 1, 1972, the dissolved municipality of Weiher became the hamlet of Haidhof and the wasteland of Haidmühle, on July 1, 1972 Holzhammer with its district of Neuersdorf and finally on May 1, 1978 Kemnath am Buchberg with its districts of Sitzambuch, Mertenberg, Döswitz, Trichenricht and Götzendorf incorporated. As a result, Schnaittenbach's population reached its current level of approx. 4400.

The mayor is a member and chairman of the city council.

In the runoff election on March 29, 2020, Marcus Eichenmüller competed against Uwe Bergmann. Of 3,488 eligible voters, 2,719 exercised their right to vote. The turnout was 77.95%. The runoff resulted in the following result:

With this, Marcus Eichenmüller replaced the first mayor Josef Reindl (CSU), who had been in office since 2002.

Eichenmüller was promoted to office on May 1, 2020.

The city is located directly on the federal highway 14 Nuremberg - Prague , about 25 kilometers east of the A 6 Amberg – Heilbronn and about 10 kilometers west of the A 93 Regensburg – Hof.
Furthermore, Schnaittenbach is on the Amberg – Schnaittenbach railway line , which is only (still) used by freight trains.

Passenger traffic on the Amberg – Schnaittenbach railway was limited to a pair of trains for school traffic from 1960 and was completely shut down on May 30, 1976. Today the route is only used for freight traffic.

Municipalities in the district of Amberg-Sulzbach

Districts of the city ​​of Schnaittenbach