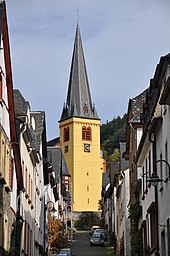 Senheim an der Mosel is a municipality in the Cochem-Zell district in Rhineland-Palatinate . It belongs to the Cochem community .

The place is on both banks of the Moselle . The actual Senheim is on the right bank, at the foot of the Hunsrück , the much smaller Senhals district on the left Eifel bank of the river. Both districts have been connected by a bridge since 1967.

First records from the year 1067 prove the existence of possessions of the Cologne church in Senhals. Senheim is first mentioned in a document in 1140.

Senheim, together with Senhals and Grenderich, was " three-lordly ", ie its territory was shared by three rulers and exercised the sovereignty jointly:

Senheim-Senhals was an important river crossing in the Middle Ages on the trade route that came from the Netherlands through the Eifel via Senheim, the Hunsrück to Frankfurt am Main and Augsburg . This route was also in use in prehistory and early history . The route over the Hunsrück is now advertised and marketed as the Keltenweg Nahe – Mosel hiking trail ). The Senheimers lived from viticulture and agriculture as early as the Middle Ages ( Rottwirtschaft . From the Electoral Trier tax statistics from 1702 it can be seen that the vineyard property in the hands of the church and the nobility was estimated at 300,000 stocks. 200,000 stocks were owned by the winemakers The Sponheim property is given as 100,000 stock.

From 1780 Kurtrier was the sole sovereign. During the coalition wars , the region is occupied by French revolutionary troops in 1794 . From 1798 to 1814 Senheim belonged to the canton of Zell in the French Rhine-Moselle department . Due to the redistribution at the Congress of Vienna , the place was assigned to the Kingdom of Prussia in 1815. Senheim became the seat of a mayor's office in the Zell district .

The Senheim of the 17th and 18th centuries with its fortification walls, towers, battlements and gates, with the large number of stately aristocratic and monastery courtyards came to an abrupt end on August 13, 1839: a major fire destroyed the medieval town within a short time Ash. 106 houses, 22 wine press houses and 7 barns burned down. The Catholic church, built in 1075, with the magnificent baroque altar by Januarius Zick and the rectory and the residential tower in Senheim survived the conflagration . When the town was rebuilt, he was given a more generous map of the town and street. As a result, 30 families could no longer find a home in the village itself. For them, a new settlement was founded on the Hunsrückhöhe in the district of Grenderich , the "Colony" Hoch-Senheim . The place was soon after completion in honor of its conveyor, the Prussian district administrator of the district Zell , Friedrich Alexander Moritz , in Moritzheim renamed.

Senheim has been part of the newly formed state of Rhineland-Palatinate since 1946 . By the 8th Administrative Simplification Act of July 28, 1970 with effect from November 7, 1970, the place came to the Verbandsgemeinde Cochem.

The development of the population of the municipality Senheim, the values ​​from 1871 to 1987 are based on censuses:

The municipal council in Senheim consists of twelve council members, who were elected by a majority vote in the local elections on May 26, 2019 , and the honorary local mayor as chairman.