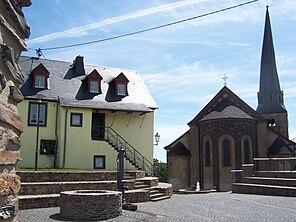 Kaisersesch is a town in the Cochem-Zell district in Rhineland-Palatinate . It is the administrative seat of the Kaisersesch community , to which it also belongs. Kaisersesch is a nationally recognized tourist destination and designated as a basic center according to state planning .

The city of Kaisersesch is located on the edge of the Eifel , between the Eastern and Vulkaneifel around 12 kilometers north of the Moselle .

In addition to pre-Roman barrows in the Langheck forest area southwest of the city and a Roman cremation cemetery in the area of ​​today's Bahnhofstraße, the route of the Roman road between Andernach and Trier , the so-called “Roman Wall” in Langheck, which is still visible today , suggests earlier settlement activities.

Between 1051 and 1056 the place Esch was mentioned for the first time in deeds of donation, which are considered unsafe or falsified. Esch had been part of Kurtrier since 1294 as a place of jurisdiction and later the seat of the Kaisersesch office . During the Palatine War of Succession , the city was almost completely destroyed by the French in 1689. From 1794 Kaisersesch was under French rule , in 1815 the place was assigned to the Kingdom of Prussia at the Congress of Vienna . Since 1946 it has been part of the then newly formed state of Rhineland-Palatinate .

In 1982, a reprocessing plant  (WAA) was planned between Hambuch and Illerich in the Pommerbachtal . After nine months, the German Society for the Reprocessing of Nuclear Fuels (DWK) withdrew all plans and the reprocessing plant in Wackersdorf (Bavaria) was to be built instead of Kaisersesch . In 1987, the state of Rhineland-Palatinate intended to build an incinerator for hazardous waste in the Kaisersesch industrial area . Here, too, the plan ultimately had to be abandoned because of the considerable resistance from the population.

The village of Esch, fortified by Archbishop Baldwin of Luxembourg in Trier, received market rights and other freedoms under Frankfurt city ​​law in 1321 from King Ludwig IV of Bavaria ( Roman-German Emperor from 1328) . These city rights were lost after the coalition wars and the French rule - nevertheless , the emperor, who was led soon after the city rights were granted (1339: Keysers-Esch ), remained in the place name. On November 22, 1997, Kaisersesch received its city rights back.

Jews have probably settled in Kaisersesch since the middle of the 19th century. In the 1930s, Düngenheim , Hambuch , Illerich and Müllenbach also belonged to the synagogue community . The size of the Jewish community was 31 in 1885, 29 in 1925, 50 in 1932 and 27 in 1939. It is not known when the local synagogue was occupied. In 1938 the prayer house on the corner of Koblenzerstrasse and Balduinstrasse was devastated, and later it was converted into a residential building. The Jewish cemetery "auf der Klopp" was occupied from 1920 to 1942 and is still preserved today.

Seal of the jury in Kaisersesch

The city ​​council in Kaisersesch consists of 20 council members, who were elected in the local elections on May 26, 2019 in a personalized proportional representation, and the honorary city ​​mayor as chairman.

Kaisersesch has a stop on the Eifelquerbahn . DB Regio regional trains run between Kaisersesch and Andernach , with connections in Andernach in the direction of Cologne and Koblenz .

In the summer months, rail buses and steam trains were offered on the Eifelquerbahn via Ulmen (Eifel) and Daun to Gerolstein for several years . There was a connection to regional trains on the Eifel route to Cologne and Trier .

Kaisersesch is located directly on the federal motorway 48 and is crossed by the state road L 98 Mayen - Cochem . The stagecoach route ran via Landkern to Cochem.

The Bundeswehr training area was abandoned in March 2013.