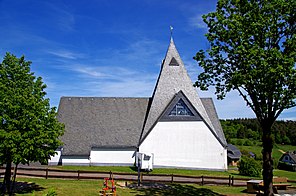 Laubach is a municipality in the Cochem-Zell district in Rhineland-Palatinate . It belongs to the Kaisersesch association.

Laubach is located five kilometers west of the city of Kaisersesch on an area sloping down to the south with the Kaulenbach that rises here . The village covers altitudes between 485  m above sea level. NN and 550  m above sea level NN . In terms of its natural surroundings , over a third of the wooded municipal area in the Eastern High Eifel can still be assigned to the Müllenbacher Riedelland , but is already at the transition to the Elzbachhöhen to the north . It belongs mostly to the conservation area "Moselle area of Schweich to Koblenz" and includes the south and part of the nature reserve "Müllenbachtal - Kaulenbachtal ".

Laubach was first mentioned in a document in 1455, when the village was sold to the Counts of Virneburg . In 1548 Kurtrier took over the sovereign rights. Laubach belonged to the Monreal office and the Masburg High Court . The high court Masburg was a fiefdom of the Counts of Virneburg. In the Trier fire book from 1563 there are 15 fireplaces (households) in Laubach ( Laupach ).

In 1794, French revolutionary troops annexed the Left Bank of the Rhine , and from 1798 to 1814 Laubach belonged to the canton of Kaisersesch in the Koblenz arrondissement of the Rhine-Moselle department . The Munizipalrat (Laubacher community representative in the Mairie Kaisersesch) was in 1808 the citizen of Velling.

Due to the resolutions at the Congress of Vienna (1815), the region was assigned to the Kingdom of Prussia . Under the Prussian administration, the municipality of Laubach came to the mayor's office in Kaisersesch in the Cochem district , which belonged to the new administrative district of Koblenz and, from 1822, to the Rhine province .

The municipality of Laubach has been part of the state of Rhineland-Palatinate since 1946 , since 1968 it has belonged to the Kaisersesch association and since 1969 to the Cochem-Zell district .

For centuries, the main source of income for the residents of the place was slate mining . Mining is documented from 1695, smaller pits existed much earlier. In 1959 the last mine was shut down after a water ingress.

The name of the place probably comes from the Middle High German "lôbach". Lôb and today's foliage refer to a forest, while the ah indicates a swampy terrain.

Until 2004, today's local community Leienkaul was part of the community Laubach.

The development of the population of Laubach in relation to today's municipality, the values ​​from 1871 to 1987 are based on censuses:

The municipal council in Laubach consists of twelve council members, who were elected by a majority vote in the local elections on May 26, 2019 , and the honorary local mayor as chairman.

The monastery with the pilgrimage site Maria Martental is located in the municipality of Leienkaul, which has been independent since June 2004.

The history of the places Müllenbach, Laubach and Leienkaul is closely linked to slate mining. Between the places lies the Kaulenbachtal, in which mainly slate mining took place. The slate mine hiking trail leads through this valley.

Laubach is on the federal motorway 48 .