Ulmen is a town in the district of Cochem-Zell in Rhineland-Palatinate in the Eifel . Ulmen is the seat of the administration of the Verbandsgemeinde Ulmen , to which it also belongs. Ulmen is a state-approved resort and designated as a basic center according to state planning .

The districts of Meiserich, Vorpochen and Furth belong to elms.

The Ulmener Maar is around 11,000 years old and is the youngest volcano north of the Alps and 37 m deep. The volcanic activity can be recognized by rising gas bubbles at depths of more than 4 meters. The Ulmener Maar has no natural inflow or outflow, but two tunnels contribute to a constant water level. Scientific research by the University of Trier has shown that the north tunnel, formerly known as the Roman tunnel, is not of Roman origin, but was built in the High Middle Ages , i.e. around 1050 to 1250 AD. The two Ulmen tunnels are a rare, and even unique, large-scale water management system north of the Alps. The city council is striving for tourist development.

The Jungferweiher is a 118,000 year old silted up maar . In terms of area, it is much larger than the Ulmener Maar. Formerly used as a fishing pond for the lords of the castle, it dried up over the centuries, so that peat was cut there in the 1930s . In 1942 the meadows were dammed again in order to control the water level through the inlet to the nearby maar.

Ulmen was first mentioned in 1074, but Merovingian graves south of the castle testify to an older settlement in the area. The Roman finds in the Hahnwiese were found to be around 2,000 years old. In Ulmen there is a burial mound that is dated around 500 BC.

In the fourth crusade, the knight Heinrich von Ulmen went to Byzantium , from where he brought back valuable treasures, including the famous Limburg Staurothek , which can still be seen in the cathedral of Limburg an der Lahn . His successors were subjected to the peace of the Archbishopric Trier in the 15th century . In Kurtrier, Ulmen was the seat of the Ulmen Office . The Sun King Louis XIV conquered Elmen twice and burned it down. Both times the castle and the place were rebuilt. From 1794, Ulmen was under French rule, the young men of the place had to move with Napoleon's troops to Moscow . In 1815 the place was assigned to the Kingdom of Prussia at the Congress of Vienna . Since 1946 it has been part of the then newly founded state of Rhineland-Palatinate .

Many old buildings still bear witness to the historical past of Ulmen. In the 19th century, when the buildings confiscated by Napoleon passed into Prussian ownership, a citizen of Cochem bought the castle and used it as a quarry. When Ulmen burned down almost completely in 1831, the houses were rebuilt using the stones from the castle. Since then it has been in ruins.

In the adjacent forest there is an old spring where Roman and Celtic figures are said to have been found. This fountain is called "Dietzjes Bärechje", which can be traced back to Kinderquelle, because women have prayed here for a good birth and healthy children for centuries.

In 1376 Ulmen received city ​​rights from Emperor Charles IV . These were lost again in 1815 when the Prussians took over the Rhineland.

The municipality of Ulmen-Meiserich was renamed Ulmen on December 1, 1970 .

According to the decision of the Rhineland-Palatinate cabinet of September 1, 2009, the local community of Ulmen was given the name "City" again on October 2, 2009.

The development of the population of the city of Ulmen, the values ​​from 1871 to 1987 are based on censuses: 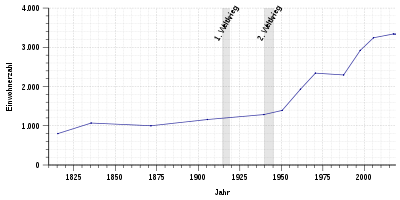 The city ​​council in Ulmen consists of 20 council members, who were elected in a personalized proportional representation in the local elections on May 26, 2019 , and the honorary city ​​mayor as chairman.

In 1994, Ulmen and the French municipality of Lormes first established a partnership. Both communities are connected by the elm (French "Orme") in the place name. The partnership documents were signed on June 23, 1996 in Lormes.

Ulmen was the site of the Eifel Maar barracks . After it became known that, contrary to the previous election promises of the then Defense Minister Volker Rühe (CDU), the entire barracks would be closed, the largest demonstration in the history of Ulm took place: On March 20, 1995, around 3,000 participants marched in a torchlight procession from the citizens' hall to the barracks . However, the barracks were closed. On June 27, 1997, the last soldier left the barracks. As part of a conversion measure, the site was renamed “Eifel-Maar-Park” and has been in civil use ever since.

The Bundeswehr service dog school was relocated in April 2005 from Koblenz-Bubenheim to the former ammunition depot in the Hochpochen forest near Ulmen. It is the Bundeswehr's central military training facility for service dogs and their service dog handlers (DHFhr). As part of the celebrations for the 50th anniversary of the School for Service Dogs on August 8, 2008, the previously nameless property in the Hochpochen forest was given the name Gräfin-von-Maltzan-Kaserne as part of a solemn roll call . This goes back to the veterinarian Maria Countess von Maltzan , who helped politically persecuted people to survive in the Third Reich despite the danger to their own lives. On January 30, 2009, the local community of Ulmen took on the sponsorship of this Bundeswehr facility, which is unique in Germany.

Ulmen is located on the federal highway 48 as well as on the federal highways B 257 and B 259 , which connect Ulmen with Cochem and the Nürburgring . Lutzerath , Cochem, Daun , Gerolstein , Mayen and Koblenz are regularly and directly accessible by bus . Ulmen is on the Eifelquerbahn and has a train station. The section belonging to Ulmen has been out of service since 2013. Ulmen is also on the volcano bike route.