Lahr is a municipality in the Rhein-Hunsrück district in Rhineland-Palatinate . It has been a member of the Kastellaun community since July 1, 2014 .

Lahr is located on a high plateau in the northern Hunsrück between the Lützbachtal to the east and the Dünnbachtal to the west . The Lahrer Mühle residential area also belongs to Lahr.

A court belonging to the Counts of Sponheim probably came from the possession of the Palatine , which they lent along with other goods to Johann von Schonenburg in 1413 and, after his death, from 1427 to Cuno von Pyrmont , who was related to him by marriage. A son of Konrad von Petershausen (1413) and Hanns von Lare (1472) are known as tenants (Konrad von Petershausen was a lay judge of the Beltheim court from the Petershäuserhof ). After the male line of Pyrmont became extinct, the estate fell back to Count Palatine Christoph Margrave of Baden and Count of Sponheim, who kept half of it and his Chancellor Dr. Hieronymus Veust enfeoffed.

Lahr belonged to the triple high court of Beltheim , which was shared by Kurtrier , Pfalz-Zweibrücken (heirs of the County of Sponheim ) and the rule of Metternich-Winneburg -Beilstein (heirs to the Lords of Braunshorn ). At times Lahr was the seat of the Beilsteiner Vogtes (Vogtei Lahr). Since he was also responsible for Winneburg-Beilsteiner subjects residing outside of the triordian area, there were occasional legal entanglements.

In 1773 Lahr was part of the Baldeneck office. By the partition contract of 1780 Lahr fell together with Beltheim and other places to Kurtrier . In 1790 the Counts of Hildesheim are listed as landowners.

A chapel was built in 1784 in honor of St. Oranna , presumably in place of an older chapel. The parish belonged to the parish of Lütz in the Kaimt-Zell regional chapter and in the archdeaconate of Karden .

From 1794 Lahr was under French rule, in 1815 the place was assigned to the Kingdom of Prussia at the Congress of Vienna . Since 1946 it has been part of the then newly formed state of Rhineland-Palatinate .

The municipal council in Lahr consists of six council members, who were elected by a majority vote in the local elections on May 26, 2019 , and the honorary local mayor as chairman.

Jürgen Olbermann is the local mayor. In the local elections on May 26, 2019, no candidate ran, and the local council had initially not found a candidate. At the second meeting of the committee on August 20, 2019, Jürgen Olbermann was proposed and elected.

The Hunsrück-Moselle cycle path runs past the outskirts through the Luhnhof forest. It is 30 kilometers long and connects the town of Kastellaun in the Hunsrück with Treis-Karden on the Moselle.

There are well-marked hiking trails in the Lahr area.

There is the volunteer fire brigade , the village community association, the chess club, the Petershausen church choir, the bowling club, the group: “Shaping old age together”, the women's community and the youth room. 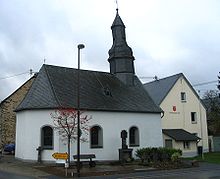 Oranna chapel and parish hall in the center of the village