This article deals with the local community of Riesweiler in the Rhein-Hunsrück district; Riesweiler is also the name of a district of Blieskastel .

Riesweiler is a municipality in the Rhein-Hunsrück district in Rhineland-Palatinate . It belongs to the Simmern-Rheinböllen community .

Riesweiler is located in the middle of the Hunsrück on the north side of the Soonwald . The highest elevation in the Rhein-Hunsrück district, the Simmerkopf, is located on the district . 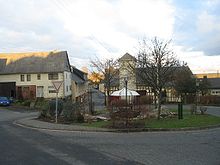 The center of the village

Riesweiler possibly has a Roman past, because it is located on an old Roman road, a branch of Ausoniusstraße , which ran past the cemetery towards Stromberg . When the town was expanded in 2003, the old road embankment was cut.

Riesweiler is first mentioned in a document as Runeswilre in a donation from Gertrudis de Honrein ( Horn ) to the Ravengiersburg monastery in 1135 . The document is considered a forgery by the archivist Georg Friedrich Schott .

The monastery rule was followed by the state rule of the Electoral Palatinate . Friedrich III. introduced the Reformation on July 16, 1557 . This is how Riesweiler became Protestant. After the Thirty Years War and the Counter Reformation , the Catholic element was strengthened again. During the Palatinate church division of 1705 , the Electoral Palatinate churches were divided between the three Christian denominations according to their strengths. The church in Riesweiler was assigned to the Reformed . Around 1762 the church was completely rebuilt.

With the occupation of the Left Bank of the Rhine in 1794 by French revolutionary troops , the place became French. In 1813 a fire broke out in Riesweiler, which destroyed almost the entire place. In 1815 the Rhineland was assigned to the Kingdom of Prussia at the Congress of Vienna . In the famine times of the 19th century, many Riesweiler turned their backs on the place and emigrated. After the First World War , the areas on the left bank of the Rhine were temporarily occupied by the French . At the end of the Second World War , many buildings were destroyed by artillery fire. Since 1946 the place has been part of the then newly formed state of Rhineland-Palatinate.

The development of the population of the municipality of Riesweiler, the values ​​from 1871 to 1987 are based on censuses:

The local council in Riesweiler consists of twelve council members, who were elected by a majority vote in the local elections on May 26, 2019 , and the honorary local mayor as chairman. Until the 2014 election, the council members were elected in personalized proportional representation.

Local mayor is Johannes Herrmann. Since there was no candidate in the local elections on May 26, 2019, he was elected in the constituent meeting of the local council. He is Thomas Auler's successor.

The "Räzebore" (Reizenborn) can be found high up in the forest. In the 18th century there was a hermitage here, the Hermitage Maria Reizenborn . A chapel was rebuilt on the old foundations in 1997 and consecrated in 1998. In an open forest church above the hermitage, popular services are held in the open air in summer. Stories and legends entwine around the Reizenborn. The miracle picture of Spabrücken is said to come from here.

In the Protestant church in Riesweiler, built around 1762, three monumental stone heads stand out. One of the sculptures can be seen outside in the western gable triangle; two others support the gallery inside as consoles. A local history researcher suspects an origin of the heads in pre-Christian times. At that time there was a cult site of the Celtic natives on Reizenborn surrounded by stone figures of gods. After the medieval Christianization around the year 1000 AD, the still existing heads of the idols in the first church of Riesweiler were walled up and then also taken over in its subsequent buildings. Typologically, these stone sculptures are related to the figures of gods from Mont Beuvray (Bibracte) and the idols of a Celtic sanctuary at the sources of the Seine, which are kept in the archaeological museum of Dijon (Burgundy).

Riesweiler has a sports club that alternates between the volunteer fire brigade and organizes the annual fair . The sports field is about 1 km east of the village on the edge of the Soonwald. Once a year, the local theater association guggemo e. V. organized a theater evening in the Soonblickhalle.