Older buildings in the center of the village 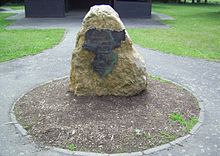 Memorial stone at the geographical center of Rhineland-Palatinate

Bärenbach is a municipality in the Rhein-Hunsrück district in Rhineland-Palatinate . It belongs to the Kirchberg (Hunsrück) community .

The geographical center of Rhineland-Palatinate is in Bärenbach.

The first written mention of Bärenbach comes from the year 1103. From 1234 to 1437 the place was owned by the Counts of Sponheim . In the centuries that followed, ownership changed several times between the Margraves of Baden , the Count Palatine near Rhine and the Counts of Veldenz .

With the occupation of the Left Bank of the Rhine in 1794 by French revolutionary troops , the place became French , from 1798 to 1814 it belonged to the canton of Kirchberg , which was assigned to the Rhine-Moselle department . At the Congress of Vienna (1815) the region was assigned to the Kingdom of Prussia . Under the Prussian administration, Bärenbach was subordinate to the Mayor's office in Sohren in the Zell district from 1816 and belonged to the Rhine Province from 1822 until the end of World War II . Since 1946 the place has been part of the then newly formed state of Rhineland-Palatinate and has belonged to the Kirchberg community since 1970 .

The development of the population of the municipality of Bärenbach, the values ​​from 1871 to 1987 are based on censuses:

The council in Bärenbach consists of eight council members, who in the local elections on May 26, 2019 in a majority vote were elected, and the honorary mayor as chairman.

Local mayor of Bärenbach is Thomas Müller. In the local elections on May 26, 2019, he was confirmed in office with a share of 70.42% of the vote.