Kappel is a local community in the middle of the low mountain range of the Hunsrück in the Rhein-Hunsrück district in Rhineland-Palatinate . It belongs to the Kirchberg (Hunsrück) community .

The community is located on the western border of the Kirchberg community, to whose administrative district it belongs, and with its district boundary in the west also forms the border between the Rhein-Hunsrück district and the Cochem-Zell district . The parish of the municipality is about 1240 hectares , of which 49.5% is forest area.

Kappel is at the intersection of federal highways 421 and 327 ( Hunsrückhöhenstraße ).

Kappel lies on the edge of a plateau that has formed a small knoll of about 525 m with the Hasen part in the northeast of the district. These high surface forms the flat valley of Kyrbaches back and a small flume in the district Mörßberg direction Kludenbach toward a Riedel from which particularly striking as spur on Church Hill in phenomenon occurs. The plateau (towards Hahn airfield ) continues beyond the stream . It is towered over by the Idarkopf on the horizon . At the same time, the first groundwater horizons emerge in the area of ​​Zeller Strasse, which could previously be used in house wells and thus formed the basis for the settlement.

History and historical description of the place

Kappel is first mentioned in 1091 in a document from Emperor Heinrich IV , in which he donated possessions in the Hunsrück to the Speyer Monastery. However, the name, location and archaeological (Roman) finds in and around Kappel suggest that the place is much older, even if there is no evidence of settlement continuity. In the Middle Ages the place belonged to the front county of Sponheim . With the occupation of the left bank of the Rhine by French revolutionary troops in 1794 , the place became French, in 1814 it was assigned to the Kingdom of Prussia at the Congress of Vienna . Since 1946 the place has been part of the newly founded state of Rhineland-Palatinate.

The place is at the crossroads of two important roads: the road from the Rhine , Koblenz / Boppard to Trier , the later so-called Hunsrückhöhenstraße (B 327), and the road from Kirn an der Nahe via Kirchberg to the Moselle to Zell (B 421). The crossing is slightly offset in Kappel. Both roads are based on Roman and pre-Roman, Celtic roads. The latter is nowadays marketed as the Keltenweg Nahe – Mosel, north of Kappel . When the Hunsrückhöhenstraße was expanded before the Second World War , it was led around the town to the east. In terms of settlement geography , the place has a traffic situation.

In the immediate vicinity of the meeting of Kastellauner Strasse and Kirchberger / Zeller Strasse on the Dreispitz is the center of the village with the Protestant church from 1747 (like the iron clamps on the tower) with parts of the medieval wall, the Catholic rectory and a little back the Catholic church, the former Backhaus ( Backes ) with the former classroom and teachers' room of the Catholic school on the upper floor (until 1849), as well as two of the largest farmsteads in the village with a restaurant and guest rooms, appropriate to the traffic situation. The innkeeper Schreck (until 2006, later sold to the community and demolished) owned until the 1950s as one of the few horses, Baptist Englen , the servant (probably the only one in the village at that time) of the inn zur Krone , now abandoned and restored as Heimathaus Krone , serving the community , drove and worked with a horse and a draft ox, while most of the smallholders drove and worked with their dairy cows . A third smaller restaurant connected to a grocery store Kolonialwaren Dionsius , since 1948 Anton Hillen, was also located here. It was given up in 1974.

According to an official register from 1926, Kappel still had 533 inhabitants. Until the 1960s, Kappel was still dominated by agriculture. After the Second World War , in 1949, 80 of 111 households were farms, of which only 8 owned over 10 hectares of land. At that time Kappel had 281 Protestant and 194 Catholic residents. At that time there was another smaller grocery store on what is now Kirchberger Straße. A stationery shop was next to the then Catholic elementary school in Oberdorf. There was also a post office in the Unterdorf on what would later become Zeller Strasse and a fourth restaurant in Waldgasse. It lasted until 1975. In 1986/87 it was rebuilt by the innkeeper's grandson and reopened as the only restaurant in Wallge . There was also a blacksmith's shop in the lower village and a carpenter's shop in the upper village. Halfmann's wire weaving mill , which, in addition to fences, mainly produced large screens, had existed for a long time and has now merged.

Due to the considerable income from forest ownership, what was then a modern community center with a fire station, turnip kitchen, storage space for the large potato steamer and freezer and washing system as well as additional living space for assigned refugees from the east was built on the upper floor in the 1950s .

In 1965 the construction of a new parish hall was started, because the citizens of Kappel and the local associations should have the possibility to celebrate family celebrations and events in a sufficiently large location. At that time, a kindergarten was also planned within this hall building, but this was not implemented there. The need for a possibility of slaughter was also taken into account and a complete slaughterhouse was integrated. This parish hall was extensively renovated and rebuilt in 1997/1998.

A kindergarten for two groups was completed in the summer of 1993 (a first kindergarten was added to the Protestant rectory in the early 1950s). Even there, the youngsters are raised for the choral societies, and the kindergarten has received an award for this.

The Kappeler Mühle, the Lorenzhecker Mühle , was located far below the village at the transition between the Hunsrückhöhenstrasse and the older Waldgasse over the Kyrbach , here still called Bingerbach in the upper reaches ; it is now privately owned and inhabited.

The Lambertsmühle am Bingerbach on the boundary of the Kludenbach district was also fed by farmers from Kappel. In the 1960s it was converted into a restaurant and operated as a bar and red light pub ( Kappeler Miehlsche ) for the nearby military and civilians. After the stationing forces withdrew in the late 1980s and early 1990s, operations were discontinued. This former mill is also privately owned and inhabited today.

In the Kappeler district or on its border there are a number of deserted areas that were already abandoned in the high Middle Ages , but whose names still live on in field names: Kyr , Kyrweiler (in older sources also called Kerweiler ), Mörßberg , Rittelhausen , Langerode , Selze and Beinhausen . Together with Rohrbach , Werschweiler bei Dickenschied and Dickenschied, Kyrweiler had to contribute to the upkeep of the newly established Dickenschied parish since 1317 .

The - today Protestant - church served both denominations as a simultaneum from 1688 ( Palatinate War of Succession ) to 1898 (see church in Hahn ). Before that, it was reserved for Protestants for a long time. With the ordinance of the simultaneum by the authorities, the pastor moved to Würrich , which was purely Protestant, and looked after the community from there. 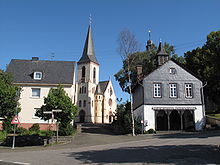 The neo-Gothic Catholic Church was built in 1898/99 and a one-class Protestant school was built nearby in 1913. The last Catholic school, at that time on the outskirts of today's Kastellauner Strasse opposite Leidenecker Weg (a little back), dates from the time after the First World War in 1928. Today there are no more schools in Kappel. The last elementary school run as a community school was closed on August 1, 1971.

The relationship between the denominations was and is good. During the construction of the Catholic Church, many Protestants donated money for the bells and were also rung by the Catholics when they died . The Protestant congregation, to which around 230 people belong today, had been independent since 1852 and had a parish office with Leideneck , which did not have its own parsonage but had a church and is now part of Bell . The evangelical pastor, who has resided in Kappel again since 1854, was also responsible for the evangelicals in the diaspora , in the predominantly Catholic neighboring communities on the Moselle. Kappel has not had a Protestant pastor since 1976 and is connected to Kirchberg in the parish. The Catholic pastoral position has not been occupied since 1981. The parish has since been run by Biebern and is now looked after from Kirchberg.

Today 44% of the population is Catholic or Protestant.

The municipal council in Kappel consists of eight council members, who were elected by a majority vote in the local elections on May 26, 2019 , and the honorary local mayor as chairman. Until 2014, the municipality council had twelve council members.

The most famous Kappeler pies were the bone flicker . The first, Jacob Pies (* 1860 in Dorweiler (Hunsrück) , † 1920 in Kappel), had in 1895 to Kappel married . His son Robert Pies (1902–1973) was the last real bone tinker from the Hunsrück family of bone tinkers in Kappel. Both were farmers who practiced chiropractic in the tradition of the Hunsrücker Pies family , that is, above all, they relocated joints and treated simple fractures. The patients came for treatment from far away. The history of Hunsrücker (and Kappeler) Pies is in the family member Eike Pies founded Vorderhunsrück Museum in Dommershausen documented in Kastellaun.

An energy cooperative has been founded in Kappel, which operates a local heating network with a length of approx. 4,200 meters. 88 buildings are currently connected (as of June 2016). The network went fully into operation in the 2015/16 heating season. In the transitional periods and the summer months, the waste heat from the combined heat and power plant of the Kappel biogas plant is sufficient . In the winter months, the peak load is generated by the biomass boiler of the heating plant. Wood chips from the forest are converted into heat in the boilers. If the biogas system fails, the heating plant with 1,000 kW has enough installed system power to cover the demand at all times.

The Kappel wind farm with seven turbines has been in operation on the Hasen part on the Hunsrückhöhenstrasse since autumn 2013. The larger Kirchberg wind farm is located in the neighboring Fass forest . The biogas plant on the outskirts (Leidenecker Straße) produces around 2,000 MWh of electrical energy per year and the 41 solar systems generate almost 500 MWh per year.

Municipalities of the Verbandsgemeinde Kirchberg (Hunsrück) in the Rhein-Hunsrück district