Bell (Hunsrück) is a local community in the middle of the low mountain range of the Hunsrück in the Rhein-Hunsrück district in Rhineland-Palatinate . It belongs to the community of Kastellaun .

The district of Bell with 458 inhabitants (as of December 31, 2012) is located about one km from Kastellaun and the Hunsrückhöhenstrasse on the edge of the basin of the streams that form the Mörsdorfer Bach, which flows past Balduinseck Castle into the Flaumbach and with it pours into the Moselle near Treis . The romantic Mühlental can only be hiked.

Population figures, main residence as of December 31, 2012; Community structure according to the State Statistical Office.

During the excavations of the Beller chariot grave , an arrowhead and a stone ax were discovered, which suggest an early settlement in the Neolithic.

Bell is a very old settlement, even if the first documentary mention in the register of annual taxes to the Archdiocese of Trier , the liber annalium , dates back to 1220. Even the name is pre-Germanic, "Bell" in Celtic refers to a hill or settlement on the heights. Grave finds near Bell, particularly Bell's chariot grave , show that the area was inhabited by Celts early on .

A Roman manor east of the church (explored in the middle of the 19th century and secured as a “ground monument”) and a Franconian manor, directly adjacent to the south (the field name “In den Hupfeldern”, the fields belonging to the courtyard, proves it; The development of the new building area there, the foundations of this old development were exposed), give an idea of ​​the importance of the place in the time of the Frankish conquest. In addition, Bell was the parish location to which the places from Leideneck to Horn and Alterkülz , even the later castle and residence town of Kastellaun and today's capital of the association, belonged. The neighboring places with the endings on -heim and -bach (Hundheim, Michelbach ) belong to the places of the first Germanic conquest of the Franks (500-700) in the migration , so they are much younger than the "place on the hill". Places with place names in -roth belong to the early medieval clearing period. Bell is also close to the Celtic, later Roman, Höhenstraße ( Römerstraße , the Hunsrückhöhenstraße ).

Only in the Middle Ages under the rule of the Counts of Sponheim Bell reappears in history . Count Simon II gives Kastellaun , the small town near his castle , 1305 city law and obtains by King Henry VII , the brother of. Baldwin of Luxembourg , Archbishop to Trier, 1308 the market law; however, as early as 1309, the future emperor Heinrich also granted Bell market rights.

Bell suffered badly from the war and the military occupation. It was particularly bad in the Palatinate War of Succession to Louis XIV's reunification policy . With the occupation of the Left Bank of the Rhine by French revolutionary troops in 1794 , Bell became French, and in 1815 Bell was assigned to the Kingdom of Prussia at the Congress of Vienna .

The Simmern – Kastellaun section of the Hunsrück Railway, on which Bell is located, was opened on October 28, 1901. Bell station ( line kilometer 13.1) went into operation with a little delay in February 1902.

At the end of the Second World War , Bell was spared from destruction when the Americans marched in on March 13, 1945, thanks to the courageous seizing and hoisting of a white flag on the church tower by citizens of Bell and their pastor Rolffs.

Bell has been part of the newly formed state of Rhineland-Palatinate since 1946 .

As part of the Rhineland-Palatinate territorial and administrative reform that began in the mid-1960s, today's municipality was transformed from the previously independent municipalities Bell (Hunsrück) (then 378 inhabitants), Hundheim (123), Krastel (173), Leideneck (233), Völkenroth (233) and Wohnroth (145) were newly formed.

First mention of the other districts

Wohnroth is mentioned for the first time in 1220 in the so-called Liber annalium of the Archdiocese of Trier. Hundheim, Krastel, Leideneck and Völkenroth were first mentioned in 1310 in the slope register of the county of Sponheim . 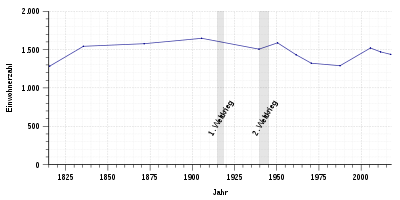 The development of the population of Bell in relation to today's municipal area; the values ​​from 1871 to 1987 are based on censuses:

With the introduction of the Reformation in the county in 1557, Kastellaun and Alterkülz became independent with their dependent communities. Leideneck separated in 1854 and shared a pastor with Kappel , but has been connected to Bell again in a parish office since 1976. The last parishes to leave Bell were in 1926 Spesenroth , which joined Kastellaun, and in 1947 Hasselbach , which is now part of the Alterkülz parish . Since January 1, 2016, the parish of Bell-Leideneck-Uhler has consisted of the previously independent parishes of Bell, Leideneck and Uhler , which had been parishioners since 2009.

The age of the Bell Church cannot be precisely determined. According to the Romanesque style of the tower, it will date from the 11th to 13th centuries. The nave is much younger. It was rebuilt in 1728 "from the foundations". The old rectory was built in 1716 to replace an older building and stood until 1959.

The three bells are remarkable. The oldest, little Maria, dates from 1313, and is one of the oldest bells in the Hunsrück with the bells from Sohren and Büchenbeuren . This bell has a diameter of 79 cm, a height of 77 cm and weighs 250 kg.

The great Maria was cast in 1459 by the bell founder Thilmann from Hachenburg . It has a diameter of 126 cm, a height of 110 cm and a weight of 900 kg. In 1694, soldiers of Louis XIV stole this bell. A brave citizen of Beller named Braun ran after the troops, persistently negotiated with the general of the troops, whereupon he had the bell unloaded again. The crown broke off. In addition to Mr. Braun's courageous actions, he was one of the few Catholic citizens of the Bell community. Out of gratitude, the presbytery at that time decided that at funerals of members of the Braun family and their descendants, the bells of Bell's church should accompany the way to the final resting place. Otherwise, only the town hall bell was rung at funerals of Catholic citizens. This decision was last implemented in 2005. Albert Braun died as the last descendant on July 31, 2005 in Kastellaun.

The third bell in the church tower was melted down during the First World War. It was replaced in 1928. After only 14 years, she suffered the same fate as her predecessor in World War II. The current bell dates from 1957 and weighs 441 kg, has a diameter of 90 cm and a height of 88 cm. The whole village came together when the bell was pulled on a taut rope from the street, through a sound hatch, into the tower.

The chalice from 1483 bears the name of the pastor at that time, "Steph 'de Bernkastel".

The municipal council in Bell consists of 16 council members, who were elected in a personalized proportional representation in the local elections on May 26, 2019 , and the honorary local mayor as chairman. The 16 seats are distributed among a total of six groups of voters .

Each of the six districts of Bell forms a local district with a local advisory board and a local councilor .

The local council consists of three local council members. In the local elections on May 26, 2019, the advisory board members were elected by majority vote.

On the penultimate Wednesday in July, the local community of Bell holds its traditional Beller market every year on the market site on Hunsrückhöhenstrasse B 327 .

The market with its centuries-long tradition as a farmers' market and cattle trading center is now a popular event for tourists and a meeting place for the population of the entire region. It attracts many thousands of visitors every year. On average, 400 market traders, showmen and restaurateurs offer guests a mixture of market trade and fairground attractions. Many local traders also take part.

Until the 1950s, mining was carried out in the Ilse manganese ore mine on the Beller district, near the Beller train station .

In terms of commercial operations there are: a car and truck workshop, an electrical installation company, a goldsmith's shop and on the road to the Beller Bahnhof / Hunsrückhöhenstraße intersection, a civil engineering and road construction company. In addition to the Bell-Vue, Bell also has an inn with a boarding house.