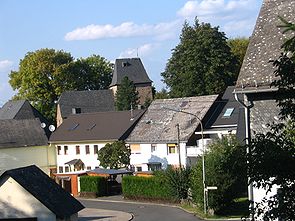 Leiningen is a municipality in the Rhein-Hunsrück district in Rhineland-Palatinate . It belongs to the Hunsrück-Mittelrhein community .

Leiningen is located on the heights of the Vorder Hunsrück approx. 15 km from the Rhine and Moselle and 30 km from Koblenz . There is a direct connection to the A 61 . From here there are numerous hiking trails and a direct connection to the Schinderhannes cycle path . The districts Lamscheid , Leiningen and Sauerbrunnen as well as the residential areas Reifenthal , St. Georgsquelle, Sankt Georg-Hof and Marienau belong to the local community .

The Counts of Leyen zu Gondorf were the local lords of Leiningen. With the occupation of the left bank of the Rhine in 1794 by French revolutionary troops , the place became French, in 1815 it was assigned to the Kingdom of Prussia at the Congress of Vienna . Since 1946 the place has been part of the then newly founded state of Rhineland-Palatinate.

Today's municipality was re-formed on June 7, 1969 during a regional reform under the name Leiningen-Lamscheid from the dissolved and until then independent municipalities of Leiningen and Lamscheid. On January 1, 1981, the community was renamed Leiningen.

The council in Leiningen consists of twelve council members, who in the local elections on May 26, 2019 in a majority vote were elected, and the honorary mayor as chairman.

Local mayor is Frank Morschhäuser. In the local elections on May 26, 2019, he was confirmed in his office with 87.11% of the vote.

The coat of arms shows a shield base above a raised blue one, inside a silver pole, in silver a black bowl fountain with a split black water jet, accompanied on the right and left by a red jug.

The lower half of the shield reminds of the family of the Counts von der Leyen zu Gondorf , to whom Leiningen belonged. The upper half of the shield refers to the Leininger-Lamscheider Sauerbrunnen, which was already known in the 16th century for its good spring water . The jugs symbolize the shipping of water abroad around 1786.