Town hall in the village center 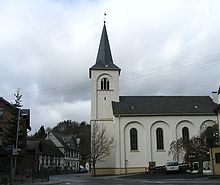 Church in the village center

Mengigart is a municipality in the Rhein-Hunsrück district in Rhineland-Palatinate . It belongs to the Simmern-Rheinböllen community .

The place is at the foot of the Soonwald in the middle of the low mountain range of the Hunsrück in the valley of the Lametbach . The Lametbach and the Brühlbach meet in the village and flow in the direction of the Kellenbach valley , which is the continuation of the Simmerbach valley . The Layenkaul district, consisting of only a few houses, is located northeast of the village on the Brühlbach.

Mengigart is one of the older places in the Rhein-Hunsrück district. In a document from around 1080 the place name appears as "Quantityzerodt". The name changed in the 15th and 16th centuries via "Mengersroit", "Mengersrade" (1502), "Mengerschitt" (1584) to "Mengigart" (1785).

Mengigart belonged to the Oberamt and Duchy of Palatinate-Simmern and came to the Palatinate in 1673 . With the occupation of the left bank of the Rhine in 1794 by French revolutionary troops , the place became French, in 1815 it was assigned to the Kingdom of Prussia at the Congress of Vienna . A fire disaster in 1841 that destroyed 28 buildings and subsequent famine years caused more than 50 people to emigrate to Brazil, the USA, England and South Africa. During the Second World War, great damage was caused by artillery fire. Since 1946 the place has been part of the then newly founded state of Rhineland-Palatinate.

The local council in Mengigart consists of twelve council members, who were elected by majority vote in the local elections on May 26, 2019 , and the honorary local mayor as chairman.

In the local elections on May 26, 2019, no candidate ran. Only at the beginning of 2020 did the local council elect Carsten Halm as mayor.

For a long time, numerous handicrafts, agriculture, forestry and slate mining were the main sources of income for the population. The field mark, which covers around 450 hectares, is now cultivated by only three full-time farmers instead of around 70 small farmers in 1950. Most of the workforce is employed in the service sector. Only a few handicraft businesses such as bakers and carpenters are based in the village.

The place is well connected to the Hunsrück cycle path network Schinderhannes-Soonwald cycle path from Simmern to Gemünden . Hikers can hike the “Soonwald” dream loop and various hiking destinations in the Soonwald (e.g. Wildburg, Alteburg and Koppenstein). The Soonwald, which is directly adjacent to the village, offers many nature experiences.

A hiking destination is the upper Lametbach valley with small waterfalls and close to the rock formation "Alte Kuh". There is an old legend about this rock formation: Afterwards the “old cow” turns around once when she can hear the noon bells of the Mengerschieder church at 11 o'clock.

The " Soonwald little castle" of Soonwald manor house training center GmbH is on the edge of the town of Mengerschied scene of the 2006 rotated in April and May and in January 2007 in the ARD for the first time broadcast television series The brides School in 1958 , in the 10 utility pupils as part of a journey ( Living History - Category) lived for six weeks under simulated conditions from the 1950s.

A baptismal font from an earlier Walpurgis chapel from the Middle Ages, which corresponds exactly to the same baptismal font in Erfurt Cathedral, is sheltered under a roof in Mengigart's cemetery. Both fonts were made by an unknown stonemason.

In the upper Lamettal, the Simmern municipal utilities have drilled deep wells to supply the population of the VG Simmern (-Rheinböllen). A dam project for the water supply was planned many years ago, but never started.