Beginnings of the castle

The builders of Rabí are not known. However, it seems likely that they were the Counts of Bogen , who owned Rabí and the surrounding areas between 1124 and 1273. After the lands fell back to Bohemia at the end of the 13th century , Rabí was probably inhabited by the Velhartices , who subsequently owned the area around Sušice. The earliest written mention of the complex is only in 1380 as the property of Puta I von Schwihau from the Riesenberg family . The Riesenbergers had acquired the castle either by buying it from or by being related to the Velhartices. At that time the castle consisted only of a donjon and probably served to secure the trade routes between Sušice and Horažďovice and to protect the gold mining around the Otava .

Expansion into a fortress

At the end of the 14th to the beginning of the 15th century, in the course of the dispute between the Bohemian aristocratic union Panská jednota and King Wenceslaus , Břeněk Švihovský von Riesenberg extended, strengthened and turned the castle into a fortress.

In 1407, however, Jan von Riesenberg , a representative of the Catholic nobility loyal to the king , inherited Rabí Castle, making it a base for the Hussite opponents from 1415 onwards. During the Hussite Wars , the Hussite troops managed to capture the castle twice in 1420 and 1421, but their general Jan Žižka lost his second eye.

After Jan's death, Wilhelm von Riesenberg inherited Rabí, then Puta II von Schwihau came into the possession of Rabí. He pushed ahead with the expansion of the fortress and had it extended by another wall ring. Since he held the function of the highest royal judge, the castle experienced an enormous increase in importance and served as a place for numerous negotiations and banquets .

Puta's descendants, who owned the castle from 1504, ran into increasing financial difficulties. In 1548, the Riesenbergers separated from the castle, which then changed hands several times. Rabí was alternately owned by Heinrich Kurzbach von Trachenberg , Diviš Malovec from Libějovice and Wilhelm von Rosenberg . Rabí finally came into the possession of the Chanovský of Dlouhá Ves in 1570 , where it would remain until the first decade of the 18th century. Despite the decrees of the Emperor Ferdinand III. and Leopold I. to destroy the castle, Rabí remained untouched. However, it was no longer maintained, which contributed to the deterioration of the complex.

During the Thirty Years' War , the castle was finally devastated. Later there was also the dismantling of the castle walls by the population, who used the stones as building material, and a fire in 1720. 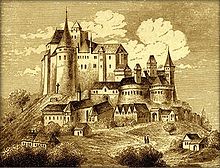 At the beginning of the 18th century the Lambergs acquired the facility. They finally transferred the ruins in 1920 for a symbolic crown to the Federation for the Preservation of Art, Cultural and Natural Monuments in Horažďovice , which began with extensive renovation measures. In 1954 Rabí was handed over to the Czechoslovak state, which declared it a national cultural monument in 1978 and had it extensively renovated from 1979 to 1985.

Rabí is located on an elevation south of the city, which is directly connected to the outermost fortress wall. In the south of the castle hill, the Otava runs in a loop, which gives the castle a strategically valuable position. In addition, the old trade route between Sušice and Horažďovice ran directly below the castle.

The core of the castle is the 12th to 13th century, 26 m high donjon with a rectangular floor plan. This was surrounded by a defensive wall during the 14th century, which also enclosed the outer bailey, which was located northwest of the donjon and housed several residential and farm buildings. A second major expansion took place at the turn of the 14th and 15th centuries. The castle complex moved further north, where another wall with towers was attached. Puta von Schwihau finally initiated the last phase of the renovation at the end of the 15th century. He had a late Gothic fortress ring built around the entire castle complex, the walls of which were stronger than those of the old castle in order to be able to withstand the fire from cannons . In addition, he had several rondels attached on all sides. After this reconstruction, the area of ​​the fortress was around 10,000 m².

The Thirty Years War and the quarry at the castle mainly damaged the outer fortress wall and the castle wall to the north in the east of the complex. Otherwise the fortress walls are relatively well preserved, but have suffered greatly over the centuries. The farm buildings of the castle are only partially preserved, among other things you can still visit the stables today. The best preserved part of the building are the Gothic cellars, which are a prime example of the architecture of the time.

Position within the castle architecture

Beyond the Czech Republic, Rabí is one of the most outstanding buildings of fortress architecture of the 16th century. It is primarily due to the size of the complex and the strength of its walls that it stands out among the European fortresses of the early modern period. In addition, the outer fortress wall with its rondelles is particularly exemplary of the late Gothic secular architecture.

The Hrad Rabí Castle Museum houses an exhibition of Gothic tiles and archaeological finds. You can also visit the historic residential tower of the castle as well as the fortifications and the stables. In addition, the history and architecture of the castle complex is explained.

Castles and chateaus in the Pilsen region