The title of this article is ambiguous. For the brewery in Dresden, see Felsenkeller (Dresden) . 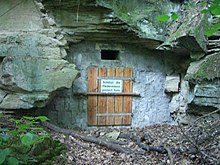 A rock cellar is usually completely carved in stone cellar . Sometimes in regions with too hard (poor workability of the rock) or too soft rock (risk of collapse) there are transitional forms to vaulted cellars that are only partially or not at all carved into the rock and covered with a vault made of stone blocks.

Brick entrance of a rock cellar in Wiebelsheim

Originally, rock cellars were primarily used to store beer and agricultural products because of the consistently low temperatures (8–12 ° C on average) that prevailed there . For this reason, restaurants or beer gardens were often created in the immediate vicinity of larger rock cellars, which are particularly popular in summer.

While private house and storage cellars were initially sufficient, capacities reached their limits with increasing production volumes of agricultural products or increasing beer consumption in the course of industrialization . Where the layers of rock allowed, many private individuals or so-called cellar communities built cellars outside of the localities and often in small forests, where shady trees could also lower the soil temperature in summer.

Rock cellar in the desert of Erlebach

Entrance to the rock cellars under the Protestant church in Dauernheim , Ranstadt community

The rock cellar of the former game management in Weidenberg

The building boom of rock cellars began with regional differences mostly in the 19th century. In Franconia, for example, the cellars have always had a high priority due to the large number of breweries , and the high phase of cellar construction can be located between 1850 and 1860. In the Aischgrund alone between Marktbergel and Adelsdorf you can count well over 600 cellars from this time. Also in the south of the Hildburghausen district in Thuringia there are private cellars in or near each place; the rock cellars are almost the only thing that can still be seen of the town of Erlebach , which has been relocated because of its proximity to the inner-German border .

With the advent of new cooling methods, many of the smaller private cellars have become inoperable, are open or have fallen into disrepair. However, they continue to serve nature conservation , as they serve locally as important winter quarters for protected animal species, for example bats .

Appearance of a typical rock cellar

The appearance of a cellar can, with a few exceptions, be generalized for explanation, and the individual details of the exemplarily presented cellar Mühlstüberl am Kellerberg in Höchstadt an der Aisch can be found in all rock cellars in this way or in slightly modified form.

In the case of larger and regularly frequented rock cellars, in particular, there is often not only a brick entrance gate, but also a cellar house directly above the cellar entrance. Mostly such houses were used to store the equipment that z. B. were required for the transport of the stored goods in the basement. Occasionally, the basement houses also developed into bar houses and meeting places for the basement communities with dance floors or bowling alleys. The Franconian expression "go to the cellar " comes from the possibility of sitting directly above the cellar entrance.

Since such a house was not possible everywhere, also due to the high construction and maintenance costs, the entrance was often only bricked a little way out of the slope and thus relocated in front of the cellar. This helped to shield the entrance area from direct sunlight and thus protect the basement from greater temperatures and fluctuations. In addition, trees were often planted for shade, but today they cause many entrances to collapse with their weight and strong roots.

A rock cellar in Wiebelsheim

In the case of basements that have been (and are) used by several parties in the basement community, each party usually has a key for the central entrance, to which the corridor with the individual, individually lockable rooms is connected. The cellars in Aischgrund are on average between 1.6 m - 2 m high and 6 m² - 10 m² in size.

In beer cellars you can find raised barrel storage either on one side of the wall or on both sides, separated by a corridor. The beer barrels, which could hold several hundred liters, were stored here at a height of 30 cm - 50 cm. Placed on wooden beams or metal brackets, the elevated storage saved the hassle of bending down, made tapping easier and also protected the wooden barrels from any groundwater or rainwater flowing into the cellar.

Today, the barrel store is often used as a storage space for canned food and preserves after harvest or slaughter.

In the case of pure storage cellars for crops, there are no storage levels and there is a level floor that facilitates the import and export of the products. In some cases stone or brick walls were drawn in to better separate the individual types.

The typical appearance of a rock cellar in Aischgrund also includes the recesses for candles or oil lamps in the cellar wall. This "ancient" type of lighting is still mostly used today, as the cellars that are not used for catering purposes are only connected to the public power supply in individual cases.

Ventilation of the rock cellar

A ventilation shaft in Kaubenheim

Since the increased humidity of the soil several meters below the surface is a natural enemy of the wooden beer barrel and the field crops, most cellars have a ventilation shaft in the ceiling of the middle to rear cellar area so that, possibly in connection with a ventilation slot or pipe in the Entrance area, an air flow could be generated through the basement and mold could be prevented.
Since the outlets of the ventilation shafts on the surface of the earth are particularly susceptible to erosion processes that expand the shaft into a funnel shape and fill the basement room below with rubble, reinforcements made of stone or concrete were often attached around the shafts and rain roofs were installed.