Höchstadt an der Aisch (officially: Höchstadt ad Aisch ) is a town in the Central Franconian district of Erlangen-Höchstadt .

The municipality has 25 officially named districts :

The place was first mentioned in a document around 800 as "Hohstete". The place name means the elevated dwelling . In the year 1003, Höchstadt (originally a “courtyard”) was mentioned as a gift from Count Ezzilo von Schweinfurt to the Fulda monastery . The city was founded at a prehistoric ford across the Aisch river . In 1380, Höchstadt was granted city rights. As a result, the palisade ring around the city was replaced by three city ​​wall rings. In place of the ford a stone bridge was built at the end of the 14th century, which was first mentioned in 1391 and still exists. In the Thirty Years War , Höchstadt was completely destroyed by the Swedes in 1633 ; it was later rebuilt. Sterpersdorf had been plundered and pillaged in 1632. During the 18th century there was a Capuchin monastery in the village , which the Prince-Bishop of Bamberg promised to strengthen the faith of the Catholic population. The town of Höchstadt an der Aisch was the seat of an upper bailiff's office until the Reichsdeputationshauptschluss of 1803 and belonged to the Bamberg Monastery , which was part of the Franconian Empire from 1500 . The place has belonged to Bavaria since 1803.

During the tenure of Mayor Anton Schell (1951–1978), the city grew continuously through industrial settlements and the development and designation of large building areas in all directions. The number of around 2000 notarized building site purchases during this time is a clear sign of growth. The double motorway connection (1964) brought another strong growth impulse. The population increased threefold compared to the pre-war period. By incorporating 23 districts (1972 and 1978) the area of ​​the municipality increased to over 73 km². In addition to extensive renovation of the old town, an area of ​​around 150 hectares was made available as a residential and commercial area in the north, south and east of the city. Since 2000, an approximately 40 hectare industrial and commercial area near the motorway in the east of the city has been developed.

On January 1, 1972, the communities of Biengarten, Etzelskirchen, Greuth and Zentbechhofen lost their independence and were incorporated. On July 1, 1974, parts of the dissolved community of Schirnsdorf were added. Schwarzenbach and Sterpersdorf as well as the main part of the dissolved municipality Boxbrunn followed on May 1, 1978.

In addition, the separately elected First Mayor belongs to the local council. In the 2020 local elections, Gerald Brehm (Young List) was confirmed in office with 56.24% of the votes cast in the first ballot.

Höchstadt an der Aisch maintains partnerships with the following cities:

The city has several schools and several vocational schools. From 2012 to 2015 there was the Fachoberschule im Aischgrund in Höchstadt , which offered a social and an economic branch. There is also a specialist academy for social education , an adult education center, a municipal music school and an art school.

There is intensive pond management in the numerous surrounding ponds . The Aischgründer Spiegelkarpfen is a nationally known specialty, which is usually baked or blue (cooked) prepared.

The city has an above-average range of shopping opportunities in direct comparison to other cities of its size in the vicinity. In Höchstadt there are discounters (Aldi, Lidl, Norma and many more), supermarkets (Edeka, Rewe, Kaufland) and drugstores (Rossmann, DM), as well as several nationally known fashion and electronics stores. Since October 2018, the Aischpark Center has been one of the largest Bavarian retail parks (approx. 70,000 m²) in the city.

The most important industrial location is a branch of Schaeffler Technologies GmbH & Co. KG , one of the world's leading manufacturers of roller needle roller bearings . In 1952, operations began in a small barrack with 14 employees. A total of 1700 people are employed at the Höchstadt location. 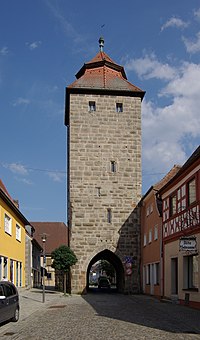 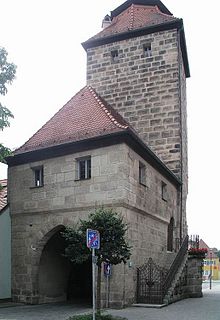 Höchstadt, view from the castle

The Höchstadter basement along Staatsstrasse 2763 has a total of 26 entrances. A real labyrinth of tunnels and corridors goes off from these, making it resemble a honeycomb. The cellar system is built on several floors and ramified. Starting from the main gallery, another 218 storage cellars were carved into the rock. The total length of all basement corridors is over 2000 meters. Most of the cellars were created by the local home brewers. A small part of the cellars was carved into the rock by the Höchstadter breweries. There are 22 cellar houses on the Kellerberg. Most of them belong to so-called basement communities.

The shoe industry, which has existed since the late 19th century, has largely lost its importance. The Fortuna Manz shoe factory moved to the neighboring community in 2004. The building was preserved as an industrial monument and was converted into the Fortuna culture factory . There is a large concert hall, a youth club, a library, cafes, the music school, the adult education center and other facilities. Events such as concerts, cabaret / comedy, readings etc. take place regularly, most of which are organized and carried out by local associations and working groups. High-ranking artists also perform in the Fortuna culture factory. The Lachnacht event series in particular is always staffed by well-known comedians / cabaret artists .

In Höchstadt there are regular culture weeks and culture nights, at which high-ranking artists are also guests. The venue is usually the Fortuna Kulturfabrik . Young & Free, the largest German school festival (2003 well over 40,000 pupils), was developed in Höchstadt and took place in 2003 and 2004 on the Aischwiesen. From 2005 it will take place in different places, such as B. in the Munich Olympic Stadium.

The Daycation, an electronic music festival with mostly nationally and internationally known acts, has been taking place at the outdoor pool in Höchstadt since 2013.

In Höchstadt an der Aisch one of the last German occurrences of the carnivorous plant species Bremi's water hose that lives in water can be found.

Municipalities in the district of Erlangen-Höchstadt