The eruptive stock was created by basaltic volcanism in the vicinity of the Mediterranean Mjosen Zone , an approximately 2000 km long fracture zone in the earth's crust in Europe .

The majority of the Hohen Habichtswald , which is located in the Habichtswald Nature Park , belongs to the area of ​​the city of Kassel, whose buildings partially extend into the mountains; the rest are among several neighboring communities in the Kassel district.

The Hohe Habichtswald is internationally known through the Bergpark Wilhelmshöhe , which includes the Wilhelmshöhe Castle , the Hercules and the Löwenburg . The Kassel water games take place here. 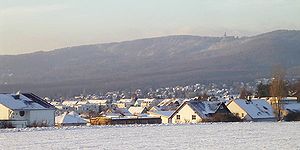 The Hohe Habichtswald is a forest area with near-natural deciduous trees in which there are many meadows and pastures. With many hiking trails, it is a popular local recreation area in the North Hessian metropolitan area. In the varied forest areas there are also rare tree species (sycamore maple, sycamore elm and service tree). Many old beech stocks have naturally rejuvenated and now show multi-layered forest patterns.

There are some smaller lakes that can be traced back to basalt mining (e.g. Blauer See, Erlenloch, Höllchen and Silbersee). In addition, there are numerous ponds and reservoirs (e.g. Asch, Fontainenteich, Lac or Schlossteich and Sichelbachbecken ) within the Bergpark Wilhelmshöhe.

The forestry use is of great importance, whereby special consideration is given to the fauna and flora, which benefits the flora and fauna . The Hohe Habichtswald is a state forest, i.e. owned by the State of Hesse, and is looked after by the Wolfhagen Forestry Office and 3 foresters. Within the mountain range the visitor gets to see varied, beautiful forest images in many places, on many hikes one encounters large stands of spruce, young colorful mixed forests and old gnarled beeches, on the large forest meadows, which are mowed only once a year (August), flourish and bloom in the spring and summer months numerous, often rare, flowers and grasses.

Beautiful avenues with mountain ash, horse chestnut, whitebeam and fruit trees have been laid out along numerous forest paths and large meadows, which impressively show their brightly colored and bright fruits in autumn. The elongated Kastanienallee , for example , which is located in the area between the Herkules , the Essigberg and the Wuhlhagen, offers a beautiful picture for every nature lover .

From the many walking and hiking trails of the Hohe Habichtswald , where numerous forest restaurants invite you to linger, you can enjoy good views of the North Hessian landscape. Many forest paths are specially designed for hikers and have rest areas. The forest visitor does not have to do without art; In addition to the old trees, which have been artistically designed by nature, you will find the artist necropolis near the Blue Lake .

On the night of January 18-19, 2007, hurricane Kyrill hit the Hohen Habichtswald very hard with wind speeds of up to 200 km / h . Over 350,000 trees were uprooted or knocked over, which corresponds to about 150,000  solid meters . The areas have now been cleared of broken or thrown trees and new plantings of different tree species (beech, sycamore maple, ash, Douglas fir, etc.) have been made.

Lookout tower on the high grass

→ see also: List of mountains and elevations in the Habichtswald Nature Park

The mountains, elevations and their foothills of the Hohe Habichtswald include - sorted by height in meters (m) above sea ​​level (NHN):

In front of the Hohen Habichtswald northeast in the Kassel Basin is a ridge with this elevation adjoining the low mountain range:

In High Habichtswald or on its edges there are numerous water bodies , including:

The firn dome pierced by a vertical tunnel

Lignite has been mined underground in the Hohen Habichtswald since the 16th century . Already in the Middle Ages it was extracted in open-cast mining , mostly to supply small glassworks . Minor turf iron stone occurrences were also processed. The last coal mines disappeared in the 1960s. Today there are only a few quarries left in which mainly basalt is mined; Especially for the purpose of the Hercules restoration, which has been taking place since 2005, an old quarry was opened near the Druseltal to extract Habichtswälder tuff . The Hercules Railway was used to transport coal and basalt from 1903 to 1961 .

On the eastern flank of the Hohen Habichtswald , towards the city of Kassel, is the Bergpark Wilhelmshöhe with Wilhelmshöhe Castle , the Löwenburg and the Hercules , the starting point for the Kassel water games . The Elfbuchen observation tower , which is currently closed , is located a little north of the Hercules , a little below it is the Blue Lake with the artist necropolis . The hiking trails in the landscape include: Ederseeweg , Fulda-Diemel-Weg , Habichtswaldsteig , Herkulesweg , Kassel-Steig , Märchenlandweg and student path .