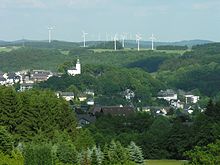 The city of Bad Marienberg (Westerwald) (dialect: Marmerich ) is a state-recognized Kneipp spa in the Westerwaldkreis in Rhineland-Palatinate and the administrative seat of the association of the same name to which it belongs. According to state planning, it is classified as a basic center .

The city is located in the Westerwald between Limburg an der Lahn in the south and Siegen in the north and between Hachenburg in the west and Herborn in the east. The Nister , which belongs to the catchment area of ​​the Sieg , flows in an east-west direction through the city.

Neighboring municipalities are Nisterau in the east, Stockhausen-Illfurth in the southeast, Hahn bei Marienberg and Hardt in the south, Unnau in the west and Lautzenbrücken in the north.

Bad Marienberg next to the main town of the districts are Eichenstruth , Langenbach with the living space strength mill and Zinhain .

The annual precipitation is 1169 mm. The rainfall is very high. They are in the upper tenth of the values ​​recorded in Germany. Lower values ​​are registered at 92 percent of the German Weather Service's measuring stations . The driest month is February, with the most rainfall in December. In December there is 1.5 times more rainfall than in February. The rainfall varies greatly. Lower seasonal fluctuations are recorded at 72 percent of the measuring stations . The maximum measured temperature is 33.7 ° C (measured on August 8th and 12th, 2003), the lowest -21.4 ° C on January 1st, 1979.

A settlement was first mentioned in a document in 1048. The name Westerwald may also be derived from this source, as the area around Marienberg is exactly west of Herborn . In 1258, Marienberg was then referred to as Mons sanctae Mariae . In the 18th century, the previously separate Obermarienberg, a ring-shaped settlement around the parish church that is still easily recognizable today, and Untermarienberg grew together.

Marie Berg was part of the group of the three "dishes" (administrative districts) Marienberg, Emmerichenhain and Neukirch rule the Westerwald , the 1255 Graf in the so-called. Ottonisch-walramischen inheritance Otto I of Nassau won. The Marienberg court existed in 1258 at the latest. After another division in 1303, the area came to Otto's son Heinrich I (III) and was now part of Nassau-Dillenburg . From 1343 to 1561 the rule on the Westerwald changed to the branch line Nassau-Dillenburg-Beilstein. After their extinction, Count Johann VI. (the elder) inherited the inheritance from Nassau-Dillenburg. With that the Ottonian ancestral lands, i.e. H. the German possessions, reunited for the first time - even if only for a short time.

After further changes of territory within the Nassau dynasty due to inheritance, Marienberg came under the government of Prince Wilhelm IV of Nassau (-Dietz) -Orania as part of the Beilstein rule . In 1742/43 he succeeded again in uniting all Ottonian countries within the Holy Roman Empire of the German Nation . Within the German possessions of the Orange, which were now administered from Dillenburg , Marienberg had been subordinate to the rule or the office of Beilstein since 1783 at the latest . The parish of Marienberg counted around 450 souls in 1580 and included the villages of Bach, Bölsberg, Eichenstruth, Fehl, Großseifen, Illfurth, Langenbach, Marienberg, Hof, Pfuhl, Ritzhausen, Stockhausen, Unnau and Zinhain. The two counties Sayn-Hachenburg and Sayn-Altenkirchen were only a few kilometers to the northwest.

With the reign of Beilstein, the place fell to the Napoleonic Grand Duchy of Berg in 1806 , where it was assigned to the Arrondissement Dillenburg within the Département Sieg in 1808 . In 1815 Marienberg went to the Duchy of Nassau . The Marienberg Office, reorganized in 1816, comprised 43 villages and 20 farms and mills in 40 municipal districts with a total of 1805 families and 7085 people. At the same time, the Marienberg Office was under the jurisdiction of the Dillenburg Criminal Court. In the course of a short-lived administrative reform, Marienberg was incorporated into the newly established Hachenburg district office in 1849 , before the old state was restored in 1854.

In 1866 the Duchy of Nassau fell to Prussia and became part of the Hesse-Nassau province as the Wiesbaden region . With the establishment of districts based on the Prussian model, Marienberg became the seat of the Oberwesterwaldkreis in 1867 with the offices of Hachenburg, Marienberg and Rennerod. The latter went 1885/86 occasion of a regional reorganization to the newly created district Westerburg (the addition of sub Westerwaldkreis the Office Wallmerod and some villages of the Office seltzer received).

Although Marienberg only had 707 (mostly Protestant) inhabitants in 1890 and was still officially a village, it already had a considerable infrastructure: The place housed a district office, a district court (regional court Limburg an der Lahn), a tax and land registry office, a post and telegraph office, an advance payment association and an agency of the Nassauische Landesbank. There was also a tannery in the village and several lignite , ironstone and clay pits in the vicinity .

With the merger of the Westerburg district with the old Oberwesterwaldkreis to form a new Oberwesterwaldkreis in 1932, Marienberg lost its function as the administrative seat of Westerburg. Since April 1, 1939, Marienberg was granted town charter, after the Second World War it belonged to the French occupation zone and was part of the "Oberpräsidium" Rhineland-Hesse-Nassau.

The city has been part of the state of Rhineland-Palatinate since 1946 . On August 10, 1967, the city was awarded the title " Bad " after having received the Kneipp health resort title in 1961 .

The city ​​council in Bad Marienberg (Westerwald) consists of 22 council members, who were elected in a personalized proportional representation in the local elections on May 26, 2019 , and the honorary city ​​mayor as chairman.

Mayor of Bad Marienberg is Sabine Willwacher (SPD). In the direct election on May 26, 2019, she was confirmed in her office with a share of 62.38% of the votes. In the 2014 election, she replaced Ernst Dankwart Neufurth (SPD), who had held this office since 2004.

The Verbandsgemeinde maintains partnership relationships with the district town of Marienberg in the Ore Mountains and the city of Bad Marienberg with Pagny-sur-Moselle in France .

The district office is a single-storey mansard roof villa from 1909. It was the residential and office building of the district administrator of the Oberwesterwaldkreis and is located on Europastraße.

The Marienberg town hall is a half-timbered building from 1788, which was previously used as a rectory. It is located on Wilhelmstrasse. Today you can find the tourist information office and the Heimatstuben there - a small local museum. In changing exhibitions, visitors see the history, customs and geology of the Westerwald. One focus of the exhibition is dedicated to basalt mining.

You can also visit the post office in the museum, which has a collection of rare postage stamps and postcards.

The Marienquelle was first mentioned in the Marmer church chronicle in 1863 as the so-called Heiligenborn. The water has been described as "excellent water". Hence the Marienquelle, the oldest part of Bad Marienberg. 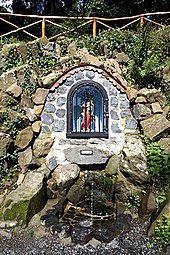 The Evangelical Parish Church is located on Kirchstrasse. It is a rectangular hall building from 1819. The previous church, documented since the 13th century, burned down completely after a lightning strike in 1813 (Kirchstrasse).

The Catholic parish church is a hall building with a tower porch on Nassauische Strasse from 1931, the architect is Dominikus Böhm .

According to the 2011 census , 46.9% of residents were Lutheran , 23.3% Roman Catholic , 0.9% Orthodox , 29.8% belonged to another or religious affiliation to any religious community. According to municipal statistics from KommWis Mainz in December 2019, 39.6% were Evangelical Lutheran, 22.3% Roman Catholic and 38.0% other or no denomination.

The "Kleine Wolfstein" and the " Große Wolfstein " are located in the city forest .

In the urban area of ​​Bad Marienberg there is a spa park with a Kneipp facility and a concert shell , where spa concerts take place regularly from May to September. There are other Kneipp basins on the forest path above Sebastian-Kneipp-Straße, on Christian-August-Kahm-Weg and on the barefoot path. This is followed by a new part of the park with a pharmacy garden and a barefoot course. The apothecary garden by Pastor Kneipp with over 90 plants was laid out according to the scheme of old medicinal plant gardens. The apothecary garden displays a variety of herbs. Each herb is explained on a sign. The garden is accessible and free of charge at all times. The Barefoot Path of the Senses is a circular path with 18 different surfaces - e.g. B. wood chips, pine cones or river pebbles.

Between Bad Marienberg and the district of Zinhain there is the Basalt Park , a disused basalt quarry which is accessible to the public with hiking trails, information boards on geology and a museum. The Bad Marienberg Wildlife Park is located in the immediate vicinity of the Basalt Park . Near the wildlife park there is a climbing forest on an area of ​​around 10,000 square meters.

The Bacher Lay nature reserve is located between Bad Marienberg and Nisterau-Bach .

A supporting program with workshops and informative lectures rounds off the offer of the Bad Marienberg health fair.

Tourism is a key economic factor in the region . Despite the loss of importance of the classic health resort, combined with a reduced number of guests in the 1990s, Bad Marienberg remains a well-known place in the 21st century. The number of overnight stays by guests in the association's community was increased by around a third by 2012 compared to the year 2000. In addition to the nature and activity tourism experiences due to the demographic change and the health tourism increasingly important again.

The European long-distance hiking trail (E1) runs from Flensburg to Genoa. The 3rd Westerwald stage also leads through Bad Marienberg. It runs to the Westerwald lake district. The route is 25 kilometers long.

The town's schools are located in the school center of Bad Marienberg:

Bad Marienberg is home to 128 European houses, the European House Marienberg . It is supported by a foundation and serves as an educational and meeting place.

Local parishes of the Bad Marienberg (Westerwald) community in the Westerwaldkreis

Cities and municipalities in the Westerwaldkreis