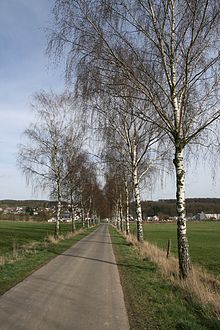 Goddert (dialect: Gorert ) is a municipality in the Westerwaldkreis in Rhineland-Palatinate . It belongs to the community of Selters (Westerwald) .

The rural residential community of Goddert is located three kilometers north of Selters in the center of the Westerwald .

The development of the population of Goddert, the values ​​from 1871 to 1987 are based on censuses:

The municipal council in Goddert consists of eight council members, who were elected in a personalized proportional representation in the local elections on May 26, 2019 , and the honorary local mayor as chairman.

In August 2018, Peter Aller was appointed by the local council. He was confirmed in office with 80.21 percent in the 2019 local elections.

Aller's predecessor, Karl-Heinz Kohlenberg, had held the post for 24 years before resigning for health reasons.

Municipalities of the Verbandsgemeinde Selters (Westerwald) in the Westerwaldkreis

Cities and municipalities in the Westerwaldkreis