Dominikus Böhm (born October 23, 1880 in Jettingen ; † August 6, 1955 in Cologne ) was a German architect , church builder and university professor of the 20th century.

Böhm was born in 1880 as the youngest of six children of the master builder and mayor Alois Böhm (1840–1890) and his wife Katharina, née Hofmiller, (1843–1921). After his father's death in 1890, his eldest brother Clemens took over his father's construction business. Dominikus Böhm graduated from elementary school and middle school in Jettingen and in 1896, after a short interlude at the teacher training institute, entered the building trade school in Augsburg (today: Augsburg University of Applied Sciences ), from which he graduated in 1900 as a "building technician". At the same time he worked in the local construction company.

After graduating, Böhm worked in various architectural offices, including in Augsburg and Switzerland. At the Technical University of Stuttgart he heard lectures from Theodor Fischer , to whom he later attributed a great influence on his work. 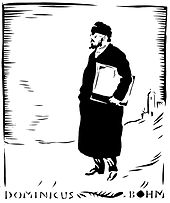 From 1907 Böhm taught for a short time at the Baugewerkschule Bingen , but after participating in the Darmstadt art exhibition in 1908, he was appointed main teacher at the Offenbach Technical College (today Offenbach am Main University of Design ), where he worked until 1926. Here he made the acquaintance of the type artist Rudolf Koch and other artists.

From 1910 he also ran his own architecture office in Offenbach and joined the German Werkbund and the Bund Deutscher Architekten (BDA) founded in 1907 . The first drafts for sacred buildings were published in the magazine Die Kirche and the magazine Neudeutsche Bauzeitung of the BDA, but none of them were implemented. During this time, mainly conventional profane buildings were realized by private and public clients in his home region.

As early as 1915/1916, Böhm - presumably through his then partner Martin Weber - came into contact with the growing Catholic liturgy movement , whose efforts to involve the community more actively in Holy Mass also made demands on a new interior design.

His church for Offenbach, which had been planned in various designs since 1914, was built as an emergency church in the post-war period in 1919 using wood as a building material. Despite its simple design, the church met with a strong response. The village church of St. Peter and Paul in Dettingen , built jointly with Martin Weber in 1922/1923, was a further developed variation of the first design. According to his plans, the nave of the St. Georg Church in Offingen was extended ten meters to the west in 1921/22 . With Martin Weber, Böhm had run the church architecture studio in Offenbach since 1921 . It was through Weber that contact with Benedictines in the Netherlands came about, through whom Böhm received the order for the construction of the new monastery in Vaals (Mamelis).

In the years that followed, Böhm's reputation as a representative of a new ecclesiastical building movement was consolidated, and in one of the pioneering writings of the liturgical reform , Johannes van Acken's work Christocentric Church Art , two of Böhm's and Weber's designs ("Lumen Christi" and "Circumstantes") were identified as architecturally- liturgically presented in an exemplary manner. In 1923 the two architects parted ways.

From 1924 onwards, Böhm had gained an employee in Offenbach with whom he was to become a lifelong friend: on the one hand, the younger architect Rudolf Schwarz was Böhm's equal partner in some projects, and on the other, he was sponsored by Böhm wherever possible. Schwarz, on the other hand, used his journalistic influence to get involved with his friend. 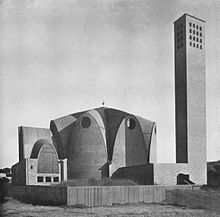 The provisional high point in Böhm's career was in 1926 when he was appointed professor for sacred art at the newly founded Cologne Werkschulen under the direction of Richard Riemerschmid . In Cologne, the center of West German Catholicism, a number of church artists gathered at this time, including the glass painter Johan Thorn Prikker . Böhm's wish to also find a job for Rudolf Schwarz in Cologne did not come true - shortly afterwards, Schwarz joined the Aachen Werkkunstschule as director.

In the few, very productive years that followed, Böhm was able to fall back on resources - rooms and student assistants - thanks to a privileged position as a professor at the Werkschulen, in order to realize a whole series of other buildings, including the Christ the King Church in Bischofsheim , that of Nuncio Pacelli , later Pope Pius XII. , Was visited in 1928. Orders from various Catholic organizations, parishes and orders followed. However, Böhm's Expressionist designs not only met with enthusiastic approval - from August Hoff , for example - but were also criticized and rejected in conservative circles. Not all projects were realized by a long way, and at the beginning of the 1930s, during the global economic crisis , efforts increased to curtail the privileges at the Cologne factory schools. A sermon by Cardinal Michael von Faulhaber , in which modern church building was condemned, Böhm referred - presumably rightly - to his church in Bischofsheim, which is considered to be pioneering. The later internationally celebrated St. Engelbert Church in Cologne-Riehl was a project that was pushed through in 1931 against considerable opposition. An audience of Böhm with Pope Pius XI. in 1931 the situation did not improve, but the result was "devastating". In addition, there were isolated attacks from the National Socialist press, which his churches described as “Bolshevik aftermarket art that would be better suited to Morocco or Palestine” . The only follow-up order from the Cologne archdiocese for the time being was St. Engelbert in Essen , where Böhm was exposed to strong attempts to influence the Cologne diocese.

In 1929 Böhm left the BDA together with other leading Cologne colleagues and founded the Cologne Building Artists block as an interest group for local architects.

From 1928, Böhm was commissioned by Moritz Wolf, also a student of Theodor Fischer, with an ambitious urban development project in Hindenburg in Upper Silesia . The Upper Silesian cities of Beuthen , Gleiwitz and Hindenburg, which had been cut off from the Polish industrial areas since 1922 , had to be expanded and developed; In Hindenburg, which was still very rural, practically a complete urban infrastructure had to be built. Wolf brought Dominikus Böhm to Hindenburg to plan a central urban square, the Monday marketplace . Böhm opened a branch office in Hindenburg with the young Herbert Rimpl as project manager and built, among other things, an old people's home, a bank, several schools, residential and commercial buildings and two churches, including the St. Josef Church, consecrated in Hindenburg in 1931.

After Böhm had built his own house in Cologne-Marienburg in Cologne in 1931 , the financial situation worsened as a result of the global economic crisis. Orders and expected fees did not materialize, and Böhm had to lay off employees.

In 1933, the chairman of the Cologne Building Artists Bloc announced that his members would join the NSDAP , and they reintegrated into the BDA, which was brought into line soon after. Dominikus Böhm objected to joining the party by writing to all ten members of the federal government. In order not to go completely into opposition, he joined the Kampfbund for German Culture and the Reich Chamber of Fine Arts . When in 1934 the Cologne Werkschulen were restructured into pure craft schools, which would have significantly worsened Böhm's position there, he resigned from his teaching post, losing his remuneration but retaining the title, and moved his office to his own company.

The only approximations to the “rulership architecture” of National Socialism are considered to be Böhm's participation in a competition of the German Labor Front for a “House of Labor” and - shortly after leaving the Cologne factory schools - a letter to Joseph Goebbels with a photo portfolio of his buildings.

His economically very tense situation - he was in debt due to the building of the house - was alleviated in the following years partly by orders from the dioceses of Münster (under Bishop von Galen ) and Osnabrück. Expressionist forms were a thing of the past; clear, straightforward buildings full of objectivity with recourse to the Romanesque dominated.

In 1939 Böhm had a house built in his native Jettingen, to which the family moved one day after the start of the war, which enabled them to avoid the coming bombing war in Cologne. When in 1943 - three years late on his sixtieth birthday - a complete monograph on his work was published, which did not omit the "frowned upon" Expressionist buildings, the first churches were already destroyed by air raids.

Long window by Dominikus Böhm in the Heilig-Geist-Kirche (Braunschweig) , 1952

Immediately after the end of the war, Böhm returned to the destroyed Cologne; In 1947 he again took over a professorship at the re-established Cologne factory schools, which were now headed by August Hoff . Supported by his son Gottfried, who entered his father's office, Böhm managed the construction and reconstruction of numerous churches until 1955, including eight in Cologne alone. The largest design that emerged during this period was the one for the Cathedral of San Salvador, which, however, was not carried out despite the competition being won.

In 1952 Böhm received the papal New Year's Eve order from Pope Pius XII .; In 1954, the Great Cross of Merit of the Federal Republic of Germany and the Great Art Prize of the State of North Rhine-Westphalia followed .

Dominikus Böhm died in Cologne on August 6, 1955. He was buried on August 10th in Cologne's southern cemetery.

Dominikus Böhm is best known for his buildings for the Catholic Church. However, after countless unrealized designs, it was only at the age of 40 that he had the opportunity to build his first smaller church in Offenbach. Since then, in addition to some secular buildings, he has been able to build countless churches in the Rhineland, in the Ruhr area, but also in the Netherlands and South America.

Böhm used modern building materials and techniques, taking into account liturgical questions that may have indirectly influenced the teaching of the Second Vatican Council . Through the reduction to essential structural forms, the liturgy-centered increase in light on the altar and the differentiated design of the altar and lay room, Böhm created a modern church architecture rooted in tradition . In particular, Böhm used light as a building material that determines the architecture, as a mystagogical sign and sign of meaning in the service of the liturgy and the praying people.

From today's point of view, most of the churches that were considered exciting at the time they were built have a rather sparse effect. Boehm's particular merit is to have given form to the demand for intensive participation of the congregation in the church service, which was later accepted by the Second Vatican Council, early on in the church building. The spatial compositions developed by Böhm for a liturgy focused on community were perceived as a special achievement on the way to modern church building. Its churches are characterized by simple monumentality and above all by the new emphasis on the altar area as the center of the community. In the time of a developing modern age, which defined building from economic, functional and constructive thoughts, Böhm always preserved not only these requirements but also the structural expression as a dominant task.

Stained glass was also one of his passions. He designed the church windows for the Holy Spirit Church in Lehndorf near Braunschweig , built in 1952 . He was also active as a musician and composer and composed numerous songs and sacred music. The postmodern architect Heinz Bienefeld began his career as an assistant to Dominikus Böhm.

A part of his estate is kept in the German Architecture Museum in Frankfurt am Main , another part was in the historical archive of the city of Cologne and was probably destroyed when the archive building collapsed on March 3, 2009.

"I build what I believe."

In June 2005, a comprehensive exhibition entitled “Raum ist Sehnsucht” about the church builder Dominikus Böhm took place in the Deutsches Architekturmuseum DAM, Frankfurt am Main. It was then shown in the Museum of Applied Art in Cologne.

Architects from the Böhm family