Estrogens or estrogens (as "oestrus" -generating substances from ancient Greek οἶστρος oístrŏs , Latinized oestrus "sting", "passion" and Latin gignere "produce"), also called follicular hormones , are the most important female sex hormones from the class of steroid hormones . These are compounds that, in animal experiments, cause oestrus in castrated rodents, for example .

They are mainly produced in the ovaries (ovaries) in follicles and in the corpus luteum , and to a lesser extent in the adrenal cortex . During pregnancy, estrogens are also produced in the placenta and by the fetus . Men also produce small amounts of estrogens in their testicles ; In addition, a certain part of the testosterone in adipose tissue is converted into estrogens by an enzyme called aromatase . The amount of estrogens produced in the gonads is regulated by control hormones produced by the pituitary gland and released into the bloodstream .

Estrogens are steroids , which as a basic skeleton estran (13 β -methyl- gonane own). The first isolation of estrogens and the determination of the structure of estrogens took place in 1929 by the German chemist Adolf Butenandt . 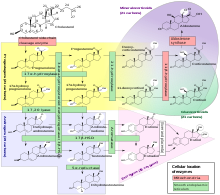 Estrogens promote the maturation of a fertile egg cell. The uterine lining is well supplied with blood by estrogens, the cervix opens, and the cervical secretion is permeable to sperm. Estrogens signal the egg cell to the pituitary gland and thus indirectly trigger ovulation. The concentration of estrogens changes significantly in the course of the female cycle . Production is controlled by the pituitary gland via the gonadotropins ( FSH and LH ). After menopause , estrogen synthesis in the female body drops sharply.

In the blood , estrogens are usually bound to protein . Specific estrogen receptors to which the estrogens bind are located on certain organs (e.g. the female breast and the uterus ) . The estrogens are transported directly to the cell nucleus and thus influence the activity of the cells. The birth control pill contains estrogens.

Estrogens promote the growth of the vagina (sheath), uterus , ovaries and fallopian tubes as well as the development of secondary female sexual characteristics such as the breasts.

Estrogens have a physiological effect on the bones in the form of epiphyseal closure and inhibition of osteoclastic bone resorption; a decrease in the level of estrogen in the blood can lead to osteoporosis (bone loss). Estrogens also have a stimulating effect on the immune system, which is why estrogen therapies occasionally activate latent autoimmune diseases as a side effect. In addition, estrogens increase the sensitivity for hearing in the brain; a reduced estrogen level, for example after menopause, worsens hearing. The hormone is essential for storing memory contents of sounds and speech.

Systemic lupus erythematosus , erythema nodosum , pruritus and erythema multiforme (all autoimmune reactions ) can occur as side effects of estrogen preparations . Estrogen can have negative effects on the psyche; the side effects of an estrogen preparation contain the information that this " very rarely <1 / 10,000 ... mental illness ... as well as insomnia and depression " can cause. Artificial sex reassignments have been observed in some animals, such as fish and frogs, under the influence of estrogens and halogenated hydrocarbons .

Of the natural estrogens, only estriol and - in high doses - estradiol show an effect when administered orally. Because of their rapid metabolism, estradiol and other natural estrogens have a volatile effect when administered parenterally and only slightly when administered orally. For this reason, artificial estrogens are mainly used for medicinal purposes, which are mostly metabolized as esters of natural compounds or as substituted derivatives, and are therefore effective for longer. A natural or artificially produced form of estrogen that can be used to treat menopausal symptoms (hot flashes, vaginal changes, bone loss) or to treat a lack of ovulation and to relieve symptoms in advanced stages of prostate and breast cancer is called (with sulfuric or glucuronic acid ) called coupled estrogen .

About five to ten percent of all women suffer from the consequences of an uneven distribution of male and female hormones, with one cause of the so-called polycystic ovary syndrome PCOS .