Vercingetorix (* approx. 82 BC; † 46 BC in Rome ) was a prince of the Gallic - Celtic Arverni , who lived in 52 BC. BC - in the seventh year of the Gallic War - almost all the Gallic peoples united in the last general but unsuccessful attempt to defend their independence against the conqueror Gaius Iulius Caesar .

Vercingetorix came from a noble family of Arverni . His father Celtillius was killed because he was striving for royal dignity.

Beginning of the uprising

Early 52 BC BC the Carnutes killed the Roman businessmen who had settled in Cenabum (Orléans). When the news of this reached Gergovia , Vercingetorix called his followers together, but was driven out of Gergovia by his uncle Gobannitio. Vercingetorix gathered a crowd of followers around him and with their help drove his opponents under Gobannitio. He was then celebrated as king by his followers.

By embassies Vercingetorix brought the Senones , Parisii , Pictones , Cadurcer , Turones , Aulerci , Lemovicer , Andes and all other tribes who came to the sea, to his side. He was given the supreme command of the fight against Caesar. Vercingetorix then set the number of soldiers each tribe had to provide.

When Caesar found out about this, he hurried to Gaul and reached the Arverni region via the Cevennes . He attacked the Arverni, who had felt safe behind the snow-covered mountains. Vercingetorix then besieged Gorgodina, a city of the Boier allied with Caesar . Caesar decided to terrify Gorgodina; on the way there he attacked Vellaunodunum and Cenabum (Orléans). Vercingetorix broke off the siege of Gorgodina and advanced against Caesar, who in the meantime was besieging Noviodunum Biturigum . This city initially surrendered to the Romans, but changed its minds when the cavalry of Vercingetorix appeared. With the help of his cavalry Caesar struck back Vercingetorix and took the city.

After this defeat, Vercingetorix decided to use the scorched earth tactic : the Gauls destroyed settlements and food supplies, only the well-fortified city of Avaricum (Bourges) was spared. Caesar besieged the city, Vercingetorix and his troops settled 20 kilometers away from Avaricum. Caesar's army suffered from supply problems, but the legions set up numerous siege works with the help of which they stormed Avaricum on a rainy spring day. According to Caesar, 800 of the 40,000 inhabitants survived the storming of Avaricum.

Vercingetorix came out of the defeat of Avaricum even stronger: He won the leaders of other tribes, including Teutomatus , for himself. He was given new troops so that he could quickly make up for the losses of Avaricum.

Vercingetorix withdrew to the difficult to capture oppidum Gergovia , the capital of the Arverni (near today's Clermont-Ferrand in Auvergne ). He was able to repel an attack by Caesar in the battle of Gergovia ; According to his own account, Caesar lost almost 700 soldiers.

Assembly of the Gallic tribes in Bibracte

After the battle of Gergovia the Haeduer fell from Caesar; thus all Gallic tribes with the exception of the Remer and Lingonen and the Treveri, who were involved in the German wars, had allied themselves against the Romans. Vercingetorix was unanimously appointed commander-in-chief at an all-Gaulish meeting in Bibracte .

Equestrian battle at the Armançon

→ Main article : Battle of the Armançon

Vercingetorix, despite its success, preferred protracted warfare. His authority over the Gallic contingent was limited, however, because parts of the armed forces pushed for an offensive continuation of the war. The Gallic army then attacked the Romans against the will of Vercingetorix and was completely defeated.

The remnants of the army withdrew to Alesia , an oppidum of the Mandubians ( Alise-Sainte-Reine in the Côte-d'Or department , near Dijon , where Napoléon III erected a 6.5 m high bronze statue of Vercingetorix in 1864 let) and were besieged here by Caesar.

Caesar had an extensive system of ramparts, ditches and palisades built around the city, which was aimed both against possible escapes from the city and against a relief army . The foreseeable food shortage drove Vercingetorix to drive women and children from the besieged fortress to the Romans, who neither fed nor allowed them to be removed. Since their husbands did not let them in either, they starved to death in front of them. When a Gallic relief army approached the city, Vercingetorix dared to break out, which failed because of the Roman defenses.

Given the heavy casualties in front of the Roman defenses, Vercingetorix allegedly advised his troops to surrender and hand him over to the victor in order to gain better terms.

The image is likely Vercingetorix's portrait.

Vercingetorix was incarcerated for six years after his capture, before being released in August or September 46 BC. At Caesar's fourfold triumph through Rome, where he was subsequently killed. His execution probably took place in the Carcer Tullianus by strangulation .

Around 48 BC L. Hostilius Sasera minted denarii whose images glorified Caesar's deeds in Gaul. The portrait of a man whose fluttering hair identifies him as a barbarian and whom a Gallic shield visible in the background makes recognizable as a Gaul is probably the portrait of Vercingetorix. 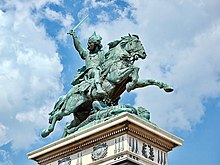 Monuments in the Second Empire

Emperor Napoleon III. , who was equally enthusiastic about Caesar and Vercingetorix, had several monuments built to the Arverni prince. One was created by the sculptor Aimé Millet in 1865 in Alise-Sainte-Reine , the presumed site of the Battle of Alesia : a seven-meter-high statue on a pedestal by Eugène Viollet-le-Duc . The words on the pedestal paraphrase, in anachronistic nationalism, part of the speech that Vercingetorix is ​​said to have given before the battle, according to Caesar:

"The united Gaul / which forms a unified nation / which is inspired by the same spirit / can defy the whole world."

Another monument of Vercingetorix from the Second Empire comes from the Alsatian sculptor Frédéric-Auguste Bartholdi , who also created the Statue of Liberty . A first draft dates from 1866, the finished statue was unveiled in Clermont-Ferrand in 1903 . It shows Vercingetorix on horseback with his sword raised, his gaze turned back to cheer on his followers. Here Vercingetorix wears the ahistorical winged helmet for the first time , which has since been depicted as typical Gallic head protection, for example since 1925 on the Gauloises brand cigarette packs or since 1959 in the comics about the invincible Gaul Asterix . This is in his habitus a "belittled Vercingetorix".

Reception since the Third Republic

In the Third Republic , nationalistically charged representations of the Gauls prince became more and more popular, especially among republican-minded French, while the conservatives and Catholics preferred to tie in with Clovis I , the founder of the Frankish Empire, in their likewise nationalist discourse .

The history painter Lionel Royer (1852–1926) painted in 1899 the only scene that has survived from Florus , of Vercingetorix laying his weapons at Caesar's feet after the Battle of Alesia. The hero of the painting rides his head held high in front of the Caesar, who is positioned significantly lower, and is superior to him purely at the height of the picture. The weapons are all on Caesar's half of the picture, where a tied Gaul with a battered back literally has to kneel under the knuckle of a legionnaire. Allusions to the French defeat in the Franco-Prussian War can be seen here: after 1871 as after 52 BC. The Gauls and the French keep their pride and dignity, even if they are defeated and one of theirs - Alsace-Lorraine , annexed by the German Empire - was shamefully captured and mistreated.

This scene was portrayed again and again in the following years and finally found parodic entry into the Asterix comics via a detour via French school books , in which Vercingetorix, as a proud man, does not lay down his weapons in front of Caesar, but hurls him on his feet so that he goes with them with a twisted expression.