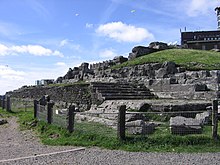 Arvernian temple on the Puy-de-Dôme

The Arverni ( Latin Arverni ) were a Celtic tribe in today's French region Auvergne . Its main town was Gergovia (today: Gergovie), south of Clermont-Ferrand and from the 1st century AD Augustonemetum (today: Clermont-Ferrand).

The Arverni were first mentioned when they invaded Italy with other Celtic tribes in the 6th century BC . Later, when the Romans began to subjugate southern Gaul, the Arvern king Bituitus supported the Allobrogians , but was defeated in 121 BC. Defeated and imprisoned by the Romans. The Romans then installed his son Congonnetiacus (or Contoniatus) as the client king.

52 BC Chr. Led Vercingetorix of Gergovia, son of Arvernerkönigs Celtillus, the big Gallieraufstand to where the battle of Gergovia a famous victory achieved. With the battle for Alesia near the Mandubian city ​​of Alesia , however, the uprising was put down under the leadership of Julius Caesar . Then the Arverni were incorporated into the Roman Empire .

The Arverni had two important sanctuaries: The spring sanctuary of Clermont-Ferrand , where wooden idols of gods were found, was near the main town of Augustonemetum . The tribal shrine was located on the summit of the 1465 meter high Puy-de-Dôme , where one of the largest Gallic temples was excavated. According to the Interpretatio Romana , the main god was Mercurius , who was invoked by the Arverni under the name Dumias , but outside the tribal area in the province of Germania inferior as Mercurius Arvernus / Arvernorix , although the connections are not clarified. The Frankish historian Gregor von Tours found the temple still in good condition. According to Pliny, the Arverni had commissioned the sculptor Zenodorus to make a colossal statue of Mercurius, which cost 400,000 sesterces .

Around the year 256 the Alemannic king Chrocus plundered the temple of Mercurius Vasso Galate in the area of ​​the Arverni .

In the Asterix - Comics often Arvernians play a role. Both in the French-language original and in the German translation, they are characterized by the fact that they pronounce the “s” like a “sh”.