from Wikipedia, the free encyclopedia
Audio sample of 1 / f noise

The 1 / f noise , also called pink noise denotes a noise whose amplitude with increasing frequency decreases. In acoustics , 1 / f noise is perceived as a noise at which an average person perceives all frequency ranges of the audible sound spectrum to be roughly equally loud.

Pink noise occurs in many different processes, often not with exactly 1 / f dependence , but with and , but then over several orders of magnitude of the frequency .

With pink noise, low frequencies dominate, which are transferred to the visible spectrum at the red end. The reddening compared to white light is very weak.

The terms red noise and white noise were formed with a comparable color analogy . 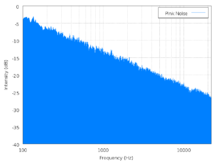 The noise power density , i.e. the power in a narrow frequency band of constant absolute width, is proportional to . In a double-logarithmic plot as in the figure on the right, the curve falls linearly with the gradient , i.e. by around 3  dB per octave .

For constant relative bandwidth, the power in the frequency band is constant. With a fixed upper or lower cut-off frequency , the integral power varies logarithmically .

The instantaneous value is often a normally distributed random variable , although, unlike with white noise, neighboring values ​​are not statistically independent . Rather, the autocorrelation function decreases exponentially with the shift (for ). This property is considered by some authors to be defining for pink noise.

1 / f noise occurs in many physical, biological, but also economic processes. In the case of many electrically poorly conductive materials, the value of the electrical resistance itself is noisy. At low frequencies, one expects the spectral curve to flatten, but this is not always found because the measurement series are not long enough for this. For some (often small) systems towards high frequencies, the slope increases to −6 dB per octave, see 1 / f² noise , unless previously superimposed frequency-independent noise such as thermal noise or shot noise , also known as white noise , prevents the measurement .

In semiconductor materials as used in electronics , the behavior can in some cases be explained by thermally induced changes in the number of charge carriers in the conduction and valence bands . In metals, the thermally activated movement of lattice defects is an important cause. In field effect transistors , in particular MOSFETs , 1 / f noise plays a role, where it dominates below approx. 15 kHz over thermal noise. Bipolar transistors or JFETs are therefore used in microphone preamplifiers .

The exact causes of 1 / f noise, such as surface effects, temperature fluctuations in the material and imperfections in the semiconductor lattice, can only be partially explained by theoretical models. Some of the explanations are only valid with severe restrictions and cannot be generalized. So show z. B. Work by F. N. Hooge et al. from the early 1980s a special relationship in a current-carrying resistance sample, such as a piece of semiconductor material. The following relationship exists between the noise power density of an electrical resistance material with free charge carriers and the resistance value :

The Hooge's constant occurs with the empirically found value of . Noise that follows this relationship is also called noise.

1 / f noise can be generated from white noise using a low-pass filter , the transfer function of which drops by 3 dB per octave . This noise signal is u. a. used as a test signal for loudspeaker measurements.

In music synthesizers , such noise generators are used as tone generators , with the spectral curve being generated directly.