Various products from the Walkman family

Walkman [ wɔːkmən ] is a trademark of the company Sony for a portable player of music (inter alia in the form of.. Cassettes , CDs , MiniDiscs or MP3 - and video files), which came as a cassette-based device for the first time in 1979 on the market and as a result achieved cult status among young people worldwide . In the vernacular of some countries, the brand name has meanwhile become a generic name (regardless of the manufacturer). In Australia and Austria, Sony was therefore deprived of the rights to the brand.

There are devices with and without a radio receiver, depending on the model for VHF , often also for MW . Depending on the model, equipment features known from stationary cassette decks such as Dolby noise reduction or Auto Reverse , and sometimes a recording function, can also be found. 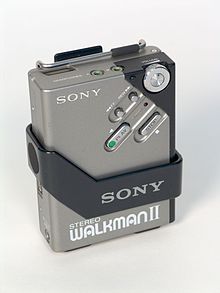 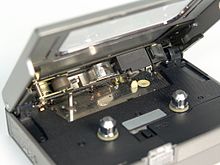 Inner workings of a Walkman II

On July 1, 1979, Sony launched its first Walkman called the TPS-L2 . As early as 1977, the German Andreas Pavel had applied for a patent for a similar device, the “small body-bound system for high-quality reproduction of audio events” . In 2004 Sony recognized this after a long legal battle.

In the 1980s, the Walkman had become an important status symbol and symbol for a new way of life among young people . Around 335 million units of devices with the brand name Walkman had been sold by 2004. At that time, some devices still had a so-called "hot button" that was used to lower the volume and activate an external microphone. Some of the devices had two headphone outputs to enable two people to listen to the music simultaneously. The volume control on some devices had separate setting options for the left and right audio channels. After a production time of over 30 years, Sony announced the end of production in Japan in October 2010. Production had already been discontinued in April of the same year, and according to the company, around 200 million cassette players were sold.

The first Walkman that could read CDs was released in 1984 under the name D-50 (or D-5 in some countries). The CD Walkman was sold under the brand name "Discman" until Sony decided to sell all of its portable music players under the Walkman logo. In 2009, Sony was still producing CD walkmans. The newer models now also played MP3 CDs, as well as the ATRAC3 and ATRAC3Plus developed by Sony . 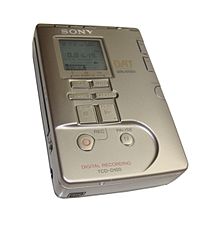 In the 1990s, Sony also manufactured a number of DAT ( digital audio tape ) devices . They also offered the option of digital recording on CD-quality cassettes. Because of the high prices and because DAT was generally unable to establish itself as the successor to the analogue cassette, the DAT Walkman was not widely used either.

The MiniDisc was introduced in Japan in 1991, and the first model came onto the market in 1992. Initially, MiniDiscs were compared to smaller CDs that were able to store 74 minutes of CD-like quality music at two-thirds the size. The first MiniDisc player from Sony, the MZ-1, was large and relatively unwieldy, but the successor models got smaller and smaller, so that the last models were hardly bigger than the disc itself. In the course of the MiniDisc history some important innovations were made introduced. From the 80-minute disc to the addition of the MDLP (MiniDisc LongPlay) codec, which allows up to four times the amount of music to be stored on a disc. With the NetMD , the OpenMGJukeBox software , later SonicStage , was also introduced . Only with this the USB- capable MiniDisc devices could be filled with music. In 2004 the Hi-MD was introduced as the successor to the MiniDisc, which was now able to store 1 gigabyte of data. Due to the strict coupling to SonicStage, Sony's audio player lost more and more of its popularity - especially in the USA and Europe. To counteract this, Sony relaxed the networking of audio players to software. The current model (MZ-RH1) appeared in 2006. All other manufacturers of MiniDisc players have already stopped their production.

With the brand name Walkman brought Sony or the mobile - joint venture Sony Ericsson , a new mobile product line on the market. According to the manufacturer, these are equipped with a particularly good music player. In contrast to most other Walkman products, however, they are not able to play Sony's ATRAC, nor do they have to be recorded using SonicStage. In June 2007 SonyEricsson announced that 26.5 million Walkman phones had been sold worldwide. This made SonyEricsson’s greatest commercial success with music phones. However, when smartphones prevailed in the following years , Sony cell phones were no longer able to assert themselves on the market.

Initially, Sony's MP3 walkman was based on flash memory and only supported Sony's ATRAC . Their capacity reached up to 1 GB . The first MP3 walkman was the NW-MS70D with a capacity of 256 MB. At the time of its release (2003) it was considered the smallest player on the market. After the success of Apple's iPod , Sony continuously lost market share to the competition. The first reaction to confront the iPod was the NW-HD1, which was smaller and was advertised as having better sound quality. But since the player only played ATRAC and the widespread MP3 format first had to be converted using SonicStage, which was also buggy, the HD1 and its successors, the HD-3 and HD-5, did not pose a serious threat to the sales of the iPod and other MP3 player. Further attempts to recapture the market followed (such as the Walkman Bean). Since all these attempts failed, the models were withdrawn from the market in mid-2006.

Sony now brought out the NW-A series. These players were initially available with 6 (NW-A1000) and 20 (NW-A3000), later also with 8 (NW-A1200) gigabytes of memory. Important technical features highlighted in advertising included the long battery life, the EL display and the numerous music functions. There were functions such as “Artist Link”, which served to find similar artists. When "My Favorite Shuffle" was activated, the player automatically selected the 100 most popular songs and played them back at random. The 'Time Machine Shuffle' was looking for a random year and played all titles released that year in a random order. The last firmware update (V.3.00) added additional functions, such as a clock and a calendar. In addition to ATRAC3 , MP3 and WMA , the player now also played AAC files . Nevertheless, Sony continued to rely on SonicStage and the Connect player, which was originally intended to be the successor to SonicStage and has since been abandoned . Since other operating systems such as Mac OS X or Linux were not supported, SonicStage was very buggy and many users rejected such software in principle, Sony received a lot of criticism for its strategy of how the music was transferred to the player. But the NW-S and NW-E series generally received excellent marks for battery life and sound quality. The NW-S700 series in particular received praise for its futuristic "noise-canceling" function. With this series, headphones with microphones were supplied, which were able to suppress outside noise. Various “clear audio technologies”, so-called by Sony, were always positively highlighted. The point that repeatedly discredited the players was SonicStage. Although the successor to the NW-A1000 series (NW-A80x) was a success, it hardly played a role in the MP3 player market.

In response from Sony, a notice was sent to the members of the Connect Music Store at the end of August 2008 that the platform was discontinued. This was justified by the fact that Sony no longer wanted to develop its ATRAC format. In addition to the end of ATRAC, the end of SonicStage was also decided. New Walkman devices should only be able to play music using drag & drop or be compatible with popular media players such as Windows Media Player . The NW-80x series was reissued under the name NWZ-A81x and gained attention. The player won an Editors Choice Award from CNET and came second in a test by Computer Bild . In addition, the NWZ-S51x series was released, which also received good grades. The abandonment of ATRAC and the breakup of SonicStage was seen by many as a step in the right direction. However, there was no lasting success.

Since the beginning of 2012, Sony has again presented numerous new devices under the Walkman brand . These usually have a touch-sensitive screen and run with the Android operating system , so that they are very similar to classic smartphones in terms of both software and hardware . However, the devices do not allow telephony over 3G / 4G networks and are therefore equipped in a similar way to the Apple iPod touch . The latest Android Walkman is called the F800 and was presented on July 18, 2012.

The compact cassette was brought onto the market in 1963 by the electronics company Philips .

In 1964, just one year after the music cassette was launched , Olympus had applied for a patent for a small portable recording device based on the shape of the cassette (inventor Matayo Toyozumi, US patent D203049). The patent protection expired in 1979, which coincides with the production launch of the Walkman by Sony. It is unknown whether series production took place.

In his autobiography, Sony company founder Akio Morita (1921–1999) claimed to be the inventor of the Walkman. However, as early as 1977, the German Andreas Pavel had applied for a patent for a similar device in several countries . The patent describes his “ Stereobelt ” as a “small body-bound system for high-quality reproduction of audio events”. Sony has long denied Pavel's claims, and several courts have denied Pavel's claim to license fees. However, after Akio Morita's death in 2004, Sony reached an out-of-court settlement with Andreas Pavel.