Niko Paech at an event on the post-growth economy (2011)

Niko Paech (born December 9, 1960 in Schüttorf ) is a German economist . He teaches and researches at the University of Siegen as an adjunct professor in the field of plural economics .

His main research areas include environmental economics , ecological economics and sustainability research . Paech coined the term “post-growth economy” in Germany and is a strong advocate of growth criticism .

Paech obtained a diploma in economics from the University of Osnabrück in 1987 . Then he worked there until 1997 as a research assistant in the field of foreign trade with Michael Braulke . In 1993 he received his doctorate on the subject of the effect of potential competition on the price-setting behavior of established companies in the absence of strategic asymmetries in the field of contestable markets . At the same time, he worked as a management consultant in the field of organic food and was a candidate in the 1990 election for the Lower Saxony state parliament . From 1998 to 2001 he worked as the first Agenda 21 representative for the city of Oldenburg and began his work at the University of Oldenburg in 2001 in the research group Companies and Social Organizations and SUstainable Markets eMERge .

In 2005 Paech was one of the founders and the first board spokesman of the scientific center CENTOS ( Oldenburg Center for Sustainability Economics and Management ) and has headed the GEKKO research project since 2006. From 2010 to 2014 he was initially together with Gerhard Oesten , later with Oliver Richters chairman of the Association for Ecological Economy (VÖÖ). He is a member of ZENARIO ( Center for Sustainable Spatial Development Oldenburg ) and the KoBE eV network ( Competence Center for Building and Energy ). Paech is also a member of the scientific advisory board of attac Germany and a founding member of the Postfossil Institute (2011).

In 2006 he was awarded the Kapp Research Prize for Ecological Economics for his habilitation thesis published the previous year on the topic of Sustainable Management Beyond Innovation Orientation and Growth - A Business-Related Transformation Theory . From 2008 to 2018, together with Werner Onken , he organized the “ Lecture Series on the Post-Growth Economy” in Oldenburg , in which lecturers from science and society discuss the conditions and possibilities of a post-growth economy. In 2012 he published the pamphlet "Liberation from Abundance". The book has now been translated into English, French and Korean. In 2014 he was awarded the Zeit Wissen prize for courage to sustainability . The jury described him as “one of the shining lights in the post-growth discussion worldwide”.

The term “post-growth economy” , which Paech brought into discussion in Germany from 2006 onwards, describes an economic system that does not depend on economic growth to meet human needs . According to Paech, growth limits such as scarcity of resources, psychological limits (“overtaxing syndrome”), crisis risks in the financial, capital and monetary system as well as ecological limits ( planetary boundaries) cause the end of growth. Paech deliberately distinguishes itself from the concepts of the sustainability debate such as “green” or “sustainable” growth, and even describes the concept of green growth as utopia, miracle or myth. He sees the need for a stationary economy in the, in his opinion, unsuccessful decoupling of environmental damage and raw material consumption from value creation and economic limits such as the global maximum oil production .

Justification for the need for a post-growth economy

Some planetary boundaries have been exceeded

Paech takes the view that modern societies have achieved their growing material prosperity through de-border mechanisms. The goods consumed cannot be produced with local and regional resources and one's own physical abilities:

“Through consumption, individuals resort to goods whose production and consumption are two separate spheres. In principle, consumers consume things that they could never or never want to produce themselves [...]. The essential principle of consumption is to make use of the work done by other people in other places and, in particular, the material yield of resources and areas consumed elsewhere. "

Only mechanical, electrified, automated or digitized aids would enable the satisfaction of material demands; Regionally non-existent resources would be procured elsewhere with the help of global value chains. The ecological problems that arise during production would on the one hand be shifted locally, but at the same time the costs would be shifted into the future by means of loans. Constantly new technologies would exacerbate the problem, as old machines would have to be disposed of - but longer-term use is often more sustainable overall than early replacement. Societies that are particularly dependent on this "external supply " because people are only supplying themselves with money are particularly vulnerable: They are forced to grow because "modern, especially industrial, labor-based supply systems without growth cannot be economically and socially stabilized."

In addition to the ecological damage, Paech emphasizes that people are also mentally overwhelmed by consumption . In particular, he criticizes the pursuit of growth, the “frenzy of expansion” and “irresponsible self-realization through material consumption”. He describes this as “consumption constipation” or “consumption burnout”, the “radical reduction of demands that serve material self-realization is not a deficiency, but a gain.” With reference to approaches in life satisfaction research, Paech argues that subjective well-being is a factor connected is such as interpersonal relationships, health, recognition and an intact perceived environment. However, these factors take more time, not money. According to this, well-being cannot be increased through more consumption or income.

The core idea of ​​the post-growth economy consists in the abolition of structural and cultural growth drivers and growth pressures . Paech relies on five principles for this: institutional innovations , material zero-sum games , regional economy , subsistence (from Latin subsistentia "existence": "by oneself, independence": "self-sustaining") and sufficiency (from Latin sufficere, dt. Sufficient: "The lowest possible consumption of resources"), "which ultimately results in a higher individual quality of life and more common good." Frugality or sufficiency would reduce the demand to consume resources. For Paech, this includes the extensive dismantling of motorways and airports. 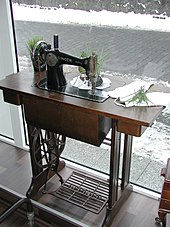 For production, the distance between consumption and manufacture should be reduced. Instead of global value chains, he recommends simple technologies that increase the productivity of human labor without completely replacing it, such as B. mechanical sewing machines and fishing rods. An increase in regional, local or self-sufficiency would reduce the structural growth drivers of “external care”. The combination of communal use as well as the extension of the useful life of goods and in-house production could help cut industrial production in half and reduce the need for paid wage employment without having to halve material prosperity. Because: "If consumer objects last twice as long and / or are used twice as intensively, half of the industrial production is sufficient to extract the same quantity of consumer functions or 'services'." Consumers become so-called prosumers because they use the goods produced improve and repair.

For individuals, Paech suggests aiming for greater satisfaction and less dependence on global value chains. However, there were no per se sustainable products and technologies, only sustainable lifestyles. This could be achieved by reducing the working time to a 20-hour week and more time for self-growing fruit and vegetables and for repairing and sharing objects. This would give people more free time and a more relaxed life. Orientation towards human proportions and a return to sedentarism would reduce the cultural growth drivers. Subsistence or self-sufficiency as a second principle is achieved through own production, community use ( sharing economy ), repair and community work. He recommends making efficient, convertible, and recyclable products. He encourages the provision of technical and manual supply services for oneself and for those close to society free of charge in order to arm oneself against future resource shortages, to protect the environment and to alleviate the pressure to grow. He thinks it makes sense if an avant-garde already maintains an appropriate lifestyle and gets along well with less consumption so that they can use their experience and their role model to help reduce frustrations, fears and possible violence.

According to Paech, the conclusion of this renewal would be that the current material prosperity could not be maintained in this way, but the resilience, i.e. the economic stability of supply, would improve. Institutionally, Paech proposes regional currencies with circulation protection as well as changes in the financial market , referring in particular to Hans Christoph Binswanger . When dealing with soil, he calls for the sealing of surfaces to be limited . and individual upper limits for greenhouse gas emissions.

With a view to coping with climate change , Niko Paech relies less on the use of renewable energies than, above all, on the exit from the growth-driving and resource-destroying consumer orientation: “If you want to displace coal, you can do it not through growth in energy production, but only through dismantling of energy demand ”.

Regarding distribution conflicts, Paech notes that one way to defuse them is "not to need those resources that everything is scrambling for and whose existence can be justified". He takes the view: "It is one of the wrong ways of modern politics to want to distribute something fairly that should not have arisen in a just world because it is based on pure plunder."

“The majority would have to deselect their own lifestyle, turn around 180 degrees, that is, suddenly endorse what every social modernization has tried to eradicate since the Second World War: frugality, self-limitation, renunciation. So sufficiency. Such a political miracle might be less likely than an encounter with the real Easter Bunny. "

Niko Paech and his concepts were presented in numerous national newspapers such as Süddeutsche , Bild , Zeit , taz , Le Monde diplomatique , Tagesspiegel , Badische Zeitung and VDI nachrichten . For this he was u. a. interviewed on Deutschlandradio Kultur at 3sat , Arte and he was a studio guest at Planet Wissen . Internationally, it was received in Austria by Südwind Magazin , Format Magazin and ORF , as well as by the Swiss Radio Stadtfilter , NZZ , and the Italian newspapers La Stampa and Panorama .

His book Liberation of abundance was from Fred Luks in the TIME reviewed. He recommends reading the book Angela Merkel , but criticizes that Paech pays too little attention to the political dimension of the problems and focuses too much on individual restrictions. Annette Jensen in the daily newspaper recognizes in the book a sharp and ironic criticism of the current growth model, but misses a convincing “route description to a desirable future”. Ulrich Schachtschneider recognizes in the Zeitschrift für Sozialökonomie that Paech derives “his sketch of a post-growth economy consistently from his analysis of the causes” and considers the book to be a “brilliant addition” and “milestone” in the discourse critical of growth , but also misses a deeper discussion of the political framework . Martin Leschke sees Paech's approach from the perspective of the constitutional economy as a radical alternative to the market economy and believes that Paech underestimates the possibilities of generating further growth with new ideas. Paech, on the other hand, considers such concepts of green or qualitative growth to be unrealistic. On the one hand, Sonja Ernst on Deutschlandfunk has doubts as to whether the post-growth economy is realistic, but acknowledges that the book "with its consistent demands contains more suggestions than some other literature".

According to the social researcher Matthias Schmelzer, Paech is considered to be one of the most important representatives of the flow of growth-critical movement, which is oriented towards individual sufficiency . In the Guardian in 2012, in an article on the German post-growth movement, he was referred to as "one of the more high-profile members of this movement [...] who recently published a controversial new book called Liberation from Affluence [...]".