The Common Corporation File ( GKD ) is a German-language authority file for the appointment of names of corporations . It was mainly used for indexing in libraries .

The common corporation file was created in the 1970s from the corporation data of the journal database (ZDB). Like the subject headings authority file (SWD) and the personal names file (PND), it was jointly maintained and updated by the German National Library (DNB), the Bavarian State Library , the Berlin State Library and, since 1997, the Austrian National Library , with several library associations participating. The responsible editorial office was at the Berlin State Library. 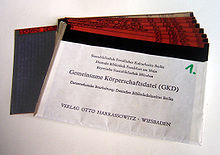 In addition to names ( preferred terms and synonyms ) of individual corporations, GKD data records contain links to higher-level corporations as well as earlier and later names.

GKD data records are uniquely identified by an ID number, the GKD number. The GKD number consists of digits and contains a check digit in the last position, which can also be 'X' (for 10). The number ranges were divided into quotas according to the library network so that it can be determined in which network they were created.

The GKD was available on microfiche for information systems in libraries (there usually via library networks) and in other areas . It was later distributed on the authority file CD-ROM and via a Z39.50 interface. There was a separate MAB format (MAB-GKD) for exchanging authority data .

Example of a GKD data record

The example is not given directly in the internal PICA + or MAB format.

The data records of the GKD can refer to one another by "earlier / later names" and "belonging to". The following example contains an excerpt: