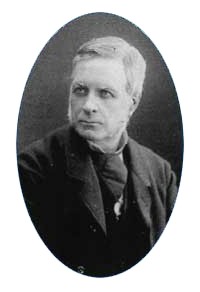 René Prudent Patrice Dagron (born March 13, 1813 in Beauvoir , † June 13, 1900 in Paris ) was a French chemist and photographer . In 1859 he registered the first patent for the creation of “microscopic photographs”, ie microscopic images of large objects, and is thus considered the inventor of microfilm .

Dagron came to Paris when he was 15. There he learned physical and chemical processes. He then improved the collodion , which could now be applied to glass as a much thinner layer. This resulted in clearer and sharper negatives. This made microphotography possible for the first time. He received a patent for this invention in 1859. In 1860 he opened his first photo studio. In his work “Traité de Photographie Microscopique” published in 1864, he describes the process he developed. In the same year he built his first darkroom for the professional creation of "microscopic photographs". He further developed his collodion material to such an extent that it could also be used without a glass slide, as the first flexible negative film with dimensions of 3 × 5 cm.

During the Franco-Prussian War and the siege of Paris , Dagron organized the reproduction of messages using photomicrographs and the transport of these photomicrographs from the provinces to besieged Paris by carrier pigeon . René Dagron and his colleague Albert Fernique left Paris on November 12, 1870 on behalf of Germain Rampont, the General Director of the Post, in the “Le Nièpce” balloon. The equipment and materials necessary for the production of microphotographs were on board. Their destination was Clermont-Ferrand . Their balloon, damaged by enemy fire, had to land near Vitry-le-François in the area of ​​the Prussian troops. Dagron and Fernique managed to cut their way through the Prussian lines. From December 15th they could start their work in Bordeaux . According to today's units of measurement, between 12 and 16 A3 sheets could be reproduced with a microphotograph. A single pigeon could carry up to 18 photomicrographs that together weighed less than a gram. More than 100,000 messages reached the besieged Paris with the carrier pigeons. These photomicrographs were enlarged with a magic lantern and the messages were copied and distributed to the recipients.