Many physical , chemical and biological processes in nature can be described mathematically with such equations, e.g. B. the radioactive decay , movement processes of bodies, many types of vibration processes or the growth behavior of animal populations . Ordinary differential equations are therefore often used in scientific models to analyze and simulate such processes or to be able to make predictions . In many cases the differential equation cannot be solved analytically . One is therefore dependent on numerical methods . See main article: List of Numerical Procedures # Numerics of Ordinary Differential Equations .

Historically, the first differential equations were used to model the motion of objects. Particularly noteworthy are the equations for the movement with constant speed or constant acceleration. In 1590 , Galileo Galilei recognized the connection between the time of a body falling and its speed of fall as well as the fall path and (still) formulated the law of free fall using geometric means .

When Isaac Newton also considered movements with friction, which are proportional to the magnitude or the square of the speed, he was forced to introduce differential calculus and the formalism of differential equations that is common today.

By precisely formulating the concept of limit values , the derivative and the integral , Augustin Louis Cauchy finally put the theory of ordinary differential equations on a solid foundation in the 19th century and thus made them accessible to many sciences.

The scientific interest in differential equations is essentially based on the fact that complete models can be created with them on the basis of comparatively simple observations and experiments.

Be and be a continuous function. Then is called

Their solutions are sometimes differentiable functions , which satisfy the differential equation on an interval to be determined . Are you looking for a special solution, which is given and additionally

is fulfilled, this is called the initial value problem .

so it is called explicit , otherwise implicit ; see also the theorem of the implicit function .

In the literature on ordinary differential equations, two different notations are used as standard. In one variation, the independent variable with called and the derivatives of the function by using , etc. The other school uses a going back to Newton notation. The independent variable is already given a meaning; is the time. Solutions are then often marked with and the derivatives according to time are noted as. Since this article was edited by representatives of both schools, both notations can be found again.

A few criteria can be used to determine whether a solution exists at all. The differential equation itself is generally insufficient to uniquely determine the solution.

For example, the basic movement sequence of all swinging pendulums is the same and can be described by a single differential equation. The actual course of movement is, however, determined by the boundary or initial condition (s) (when was the pendulum pushed and how large is the initial deflection).

The local solvability of initial value problems for ordinary first-order differential equations is described by Picard-Lindelöf's theorem and Peano's theorem . In a second step, the existence of a local solution can be used to infer the existence of a non-continuable solution . With the help of the theorem of the maximum existence interval, building on this non-continuable solution, one can then occasionally prove globality. The uniqueness is obtained as an application of Gronwall's inequality .

So we get a system of ordinary first order differential equations:

This means that with a set of unstable atoms the number of decaying atoms depends proportionally on the total number of atoms present.

By knowing the force that depends on the time and position of a particle , these equations make statements about the movement of the particle itself.

This system describes the temporal change in the predator population and the prey population with constant natural birth rates and death rates . Some important properties of this model can be summarized in the form of the so-called Lotka-Volterra rules . This and similar systems are widely used in theoretical biology to describe spreading processes and in epidemic models.

Other important types of ordinary differential equations are the following:

, where the vector field has a potential function.

A system of differential equations is called autonomous or time-invariant if the descriptive equation does not depend on the independent variable . Ie if the system is of the form

A system of differential equations

means complete if the global solution is completely defined and unambiguous for each initial value . This is e.g. B. the case when linearly bounded and Lipschitz continuous . It denotes this (uniquely determined global) solution. Then we call the flow the differential equation , and then we build a dynamic system .

The case of flat autonomous systems is particularly easy to analyze . With the help of Poincaré-Bendixson's theorem one can often prove the existence of periodic solutions. The Lotka-Volterra model forms an important level autonomous system .

Many dynamic systems from technology, nature and society can be described by ordinary differential equations. Many physical problems that appear very different at first glance can be represented formally identically with the GDGL.

A dynamic system behaves linearly if the effects of two linearly superimposed input signals are linearly superimposed in the same way at the output of the system. A linear GDGL contains the function you are looking for and its derivatives only in the first power. There must be no products of the function sought and its derivatives. The function you are looking for must not appear in the arguments of trigonometric functions, logarithms, etc.

A well-known example from mechanics is the linear GDGL of the second order of a damped spring pendulum with the spring stiffness , mass and damping constant . The input variable is: the force , the output variable is the path .

Linear time-invariant systems can be calculated using the following methods:

If a GDGL has order n, then its solution has n constants of integration. For this, n initial conditions must be given.

The Exponentialansatz provides derivatives of the form: .

The determination of the integration constants for systems of higher order (> 2) is very laborious. Further information can be found in the specialist literature.

A homogeneous GDGL of the nth order has n initial values. For the homogeneous ODE of second order with two presettable initial values and the coefficients and are calculated when the roots of the characteristic polynomial are known.

For each initial condition there is an equation ( , ).

Example of a homogeneous GDGL with two real zeros and and initial values ; :

Calculation of the coefficients:

The coefficients and can be determined from the two equations for and for .

Note: The derivation of

Table: The different types of solutions of the quadratic equation , due to the size of the discriminant , result in three different cases of the eigenvalues λ of the GDGL such as: 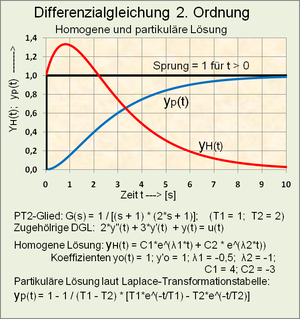 The general form of a differential equation with constant coefficients of the output quantity and with the input quantity is:

Using the Laplace differentiation theorem of a GDGL results in algebraic equations with so-called numerator and denominator polynomials. is the complex Laplace variable that has an exponent instead of the order of a derivative. The transfer function is defined as the ratio of the output signal to the input signal , where the initial values ​​of the system are zero.

Alternatively, Laplace transform tables can be used, which contain the most common corresponding equations in the time domain.

The particular solution describes the transmission behavior of the system as a function of the input signal and is usually of primary interest. The initial conditions and have the value 0.

Solution of the given GDGL 2nd order:

The transfer function of a system arises according to the differentiation theorem by exchanging the time-dependent terms of a GDGL with the Laplace transform. The prerequisite is that the initial condition of the system is zero. Depending on the degree of derivatives of a function y (t), the following Laplace transforms Y (s) arise after the transformation:

With the transformed terms, the transfer function of the dynamic system G (s) can be set up:

Due to the different ways of solving the poles due to the size of the radicand of the quadratic equation, there are three different cases of the eigenvalues (of the poles ) of the transfer function. The following is a table of correspondence between the s-area and the time area for a transformed input jump .

The following basic polynomials (binomials and trinomials for complex conjugate poles) arise depending on the zeros. The solutions of the transfer functions as step responses in the time domain have been taken from a Laplace transformation table:

The Laplace transformation tables can be listed in two forms of product representation, whereby different factors a 0 and K must be taken into account. The conversion of the pole zero representation into the time constant representation is simple, they are algebraically identical. .

Table: Calculation of the step responses of a 2nd order transmission system depending on the types of poles: 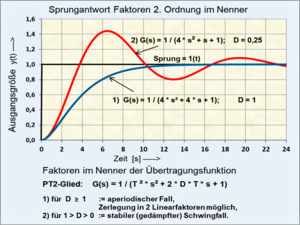 If two real zeros are inserted into the equation for , division by zero results , which is not permissible. Zeros are already considered to be "different" zeros if they differ in a theoretically infinite decimal place of a value.

The overall solution of a GDGL results from the superposition of the system responses on the initial conditions and on the input signal:

The particular solution of the GDGL refers to the fact that the initial values are zero and the input signal is. It can be determined from the transfer function by subjecting the differential equation to a Laplace transformation.

Note: If the output variable of a transmission system contains vibration components, the transformation tables result in complex trigonometric equations.

Some CAS can solve differential equations, e.g. B .: