The title of this article is ambiguous. Further meanings are listed under Ritterhaus (disambiguation) .

Riddarhuset in Stockholm, seat of the Swedish knight house 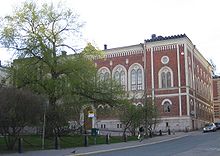 Ritarihuone in Helsinki, seat of the Finnish knight house

The knight's house has been in Sweden (Swedish riddarhuset ) since 1626 and also in Finland (Swedish Finlands riddarhuset, Finnish Suomen ritarihuone ) the name of a corporation of the Swedish nobility or the Finnish nobility. The Swedish knight house was created by the knight house rules of King Gustav II Adolf .

Gustav II Adolf founded the knight house in 1625 by issuing a knight house order. All Swedish nobles had to register there. This made the nobility a closed body. The Riddarhuset in Stockholm as the seat of the knight's house was built between 1641 and 1674 as a meeting place for the Swedish nobility.

After Finland separated from Sweden in 1809, a separate Finnish knight house was formed in 1818, in which the old noble families there came together. With the state parliament order of April 15, 1869, the Finnish aristocracy secured participation in legislation and tax permits.

The Knight House was in Sweden to 1865 and in Finland until 1906 a special chamber in the stands Reichstag or in the parliament of the country concerned. The Swedish knight house was headed by the land marshal (Swedish: lantmarskalk ), who was also chairman of the state council due to this position.

In 2004 there were still around 619 Swedish noble families (which together comprised around 28,000 people). As before, they are divided into counts, barons and the untitled nobility (46 count houses, 124 barons houses and 449 noble houses). There are still just over 100 noble families in Finland.

With effect from July 1, 2003, the knight's house in Sweden lost its privileged position as a public corporation and became a legal person under private law. Today (2018) both houses of knights deal with nobility law issues and with the administration of the assets of the two former chambers and the distribution of funds from funds and donations that have been left to the house of knights as a corporation over the centuries.