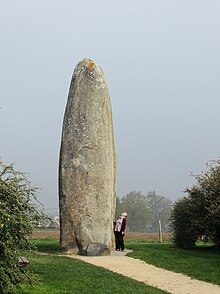 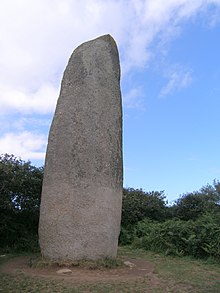 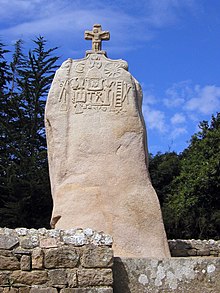 The menhirs of Brittany are large, mostly single standing monoliths , which were erected by the people of the megalithic culture and partly overturned again or were used for other purposes. The stones within stone rows ( French alignements ) are also called menhirs, although they probably had a different function and meaning.

At the end of the 18th century, archaeologists used the Breton word menhir (long stone) to denote such stones, although the Breton term “peulvan” ( German  “stone pillar” ) would have been more appropriate.

One should not confuse the actual menhirs with the stelae smoothed on both sides or with the so-called statue menhirs that are common in western Brittany . These steles date from the late Bronze and Early Iron Ages and were often Christianized.

Archaeological finds make it possible to classify them in the prehistoric cultural sequence of Brittany . The carbon-14 content of charcoal, which was found under the stones in a few cases, has been used to determine that they were erected during the Neolithic about 6000 years ago.

The people who erected the largest stones in Europe were sedentary, growing grain , raising livestock, living in wooden houses, gathering fruit, hunting and fishing. They smoothed hard stone, worked flint and made fired ceramics . Their clothing was made of furs and coarsely woven fabrics.

A rock massif in the immediate vicinity was mostly used for stone extraction. In addition to the 8.50 m high menhir of Men-Marz near Brignogan , in the Finistère department , you can still see the rock formations from which it was broken off. There are a number of examples of geologically proven transports over three to four kilometers (e.g. the menhirs of Plouarzel and Dol ). Irregular boulders made of quartz , quartzite or conglomerate , as well as slabs of slate were used . But was pre Attracted granite . In the granite rocky seas near the sea , the stone blocks already had the desired shape, partly due to erosion. Rocks that protruded a little could easily be loosened. On one side you can see the fresh break, on the other they are weathered and rounded. This explains the appearance of many granite menhirs. Investigations showed that its base was set a few decimeters (but also several meters) into the earth and was wedged with smaller stones. It is rare to find menhirs with a flat base that were in equilibrium without support. On the floor there are shards of coarse pottery, flint fragments , polished stone axes or parts of millstones . Some stones show traces of fire, partly there is charcoal because the stone was set when the pit was fired.

Menhirs are far more numerous in this part of Europe than anywhere else. These megalithic monuments can be found in large numbers along the coasts or on hilltops and mountain ridges inland . Menhirs are more often found on slopes than on peaks. Some are found in valleys or lowlands, and a considerable number are at water points or streams. Menhirs can stand alone or belong to others, with which they form circles or rows .

Their shape varies somewhat, depending on the rock they are made of. In Brittany there are menhirs that have been hewn all around or flattened by hammering. They are mostly very large specimens:

The dimensions of the French menhirs are very different. They range from a few decimeters to more than 20 m in height, which the broken Grand Menhir of Locmariaquer ( Morbihan Department ) had. Like many others, it was deliberately overturned at some point. The Locmariaquer menhir should have weighed 300 tons (not 350 as is often stated). The 7.0 m high menhir from Melon near Porspoder (Finistère), which was destroyed in the Second World War , reached around 80 t. The largest upright menhirs reach lengths of up to 12 m with the area lying underground and weigh dozens of tons.

Menhirs only rarely have engravings or motifs in bas-relief. One can assume that many were decorated, but the signs, exposed to wind and weather, were destroyed by erosion. Granite in particular breaks down grain by grain. Many menhirs made of weathered granite have lost several centimeters of their surface in 5000 years. Some menhirs still have engravings or reliefs, but these may also have been added later:

The bowls can often be found on stones of any age, individually or in groups .

Many, especially the flat menhirs, which are hardly to be found today, were destroyed. Some were integrated into tombs ( Gavrinis , Table des Marchand ). In addition, they were sometimes struck by lightning. If one extrapolates the damage caused by lightning strikes in 50 years, one comes to the conclusion that events of this kind are not to be neglected factors in the chronicle of their mostly human destruction. 23 menhirs are on the loss list in the Côtes-d'Armor department alone .