The Dark Side of the Moon

This article covers the Pink Floyd music album . For more meanings, see The Dark Side of the Moon (disambiguation) .

The Dark Side of the Moon is a concept album , the eighth and most successful album by the rock group Pink Floyd . After the album was released on March 24, 1973, it was listed in the international charts for years . With over 50 million records sold by 2008, it is now often the third best-selling album after Michael Jackson's Thriller and AC / DC's Back in Black . Around a quarter of a million copies are still sold every year.

Bassist Roger Waters had the idea as early as the fall of 1971. His experiences with the demise of the former Pink Floyd member Syd Barrett created the thematic framework: What can drive sensitive people crazy? Waters wanted to show anonymous power structures like money, time and the madness of war. Sobering experiences with the music business and the loss of a utopia , in which the hippie generation still believed, rubbed off on the lyrics. According to Harms, it is a tone painting that depicts the pressures of everyday life and reactions to them such as alienation, repression and schizophrenia.

Since the band Medicine Head had also released an album called Dark Side of the Moon almost at the same time , there were intermittent considerations to give the Pink Floyd album the title "Eclipse". It wasn't until the Medicine Head release became commercially unsuccessful that the original album title was retained.

The Dome in Brighton, where The Dark Side of the Moon was first performed in 1972

Parts of the material for The Dark Side of the Moon were first presented on January 20, 1972 at "The Dome" in Brighton , but due to technical problems, the band had to end their performance after Money . A recording of the complete concert on February 17, 1972 was sold as a robbery under the title Live - The Best Of Tour 72 . Perfected as a closed album cycle, it was to be played in full LP length at every Pink Floyd concert until July 1975.

The album was recorded at London's Abbey Road Studios from June 1972 to January 1973. In addition to the group members, the following musicians were involved: Dick Parry ( saxophone on Money and Us and Them ), Clare Torry (vocals on The Great Gig in the Sky ), Doris Troy , Leslie Duncan, Liza Strike, Barry St John ( backing vocals ). It also contains short fragments from interviews Roger Waters conducted with people who happened to be in the studio, particularly studio staff and members of the Wings group . Even Paul McCartney was interviewed, his contributions, however, were not used. The work closes with a sentence from the porter at the Abbey Road Studios at the time who, when asked about the subject, said:

“There is no dark side to the moon; in fact it is very dark. "

His following sentence "The only thing that makes it look (a) light is the sun." was not used on the album.

On most CD pressings, during the fading heartbeats at the end of Eclipse, a barely audible orchestral version of the Beatles song Ticket to Ride can be made out. The exact cause and purpose of this quote are not yet known. Although this effect can also be demonstrated on high-quality vinyl pressings from the time before the CD era (e.g. EMI Pro-Use-Series EMLF-97002, published for the first time in 1978 in Japan), the opinion still holds that it acts was a mistake that only occurred during the mastering for the compact disc (regular vinyl pressings are hardly able to reproduce the episode due to its background noise). Both Pink Floyd and The Beatles were regulars at Abbey Road Studios.

From a musical point of view, the album marks the development of the band towards an increasingly professional production method. The music is quite commercial compared to previous Pink Floyd albums . Pop elements that were fashionable for the time were incorporated into the sound, especially synthesizers , which were used here on a large scale for the first time. Next to it is David Gilmour's melodic, blues -beeinflusstes guitar characteristic of the album.

At the same time, some surreal and bizarre moments still shape the album. Particularly striking are the spoken passages, which immediately determine the Speak to Me intro . This sound collage begins with the pounding of a heartbeat, above which several people talk about the central themes of the concept album : death, madness and violence. Based on an idea by sound engineer Alan Parsons , the two single releases Time and Money each received an unusual intro with looped sequences of several synchronously ringing alarm clocks and the ringing of a cash register . Money is held in rock music-untypical 7/4 time except for the guitar solo middle section, which is played in 4/4 time. The piece On the Run describes the fear of traveling. Roger Waters' fear of flying played a role in the creation of this piece, which evolved from performance to performance. The sounds of an exploding airplane, with which the song ends, bring the topic to the point. It is based on a synthesizer loop, which has been supplemented with sound collage-like elements, and thus represents an early form of techno . What is striking about the harmony of the album is the very often circular II-V chord progression (for example Em7 - A7) . 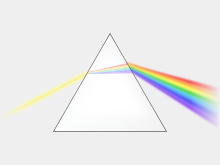 Scheme representation of a light-refracting prism.

One of the first drafts of the cover 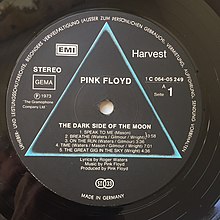 Label of the LP

The album cover was developed by George Hardie of the Hipgnosis design studio. The cover design was done by Storm Thorgerson . In front of a black background, it shows the refraction of a white light beam on a prism , which fans out into the spectral colors. This motif is a quote from a classic from the record cover that Alex Steinweiss designed for Beethoven's 5th Piano Concerto in 1942 - the piano of Steinweiss' original was replaced by a prism. The fanned out spectral colors continue in the opened part of the cover and graphically describe a heartbeat, as it can be heard at the beginning and at the end of the record. For the new editions for the 20th and 30th anniversaries of the album, the cover was optically renewed in 1993 and 2003, but the motif was retained.

Despite the great commercial success, many critics were initially dissatisfied with the perfectly produced, but not very avant-garde and catchy music on the album compared to the previous albums. The Dark Side of the Moon was music for " hi-fi snobs", it was said about. In the magazine Sounds the album was panned as a sell-off of previous artistic successes: "The Pink Floyd now live from quoting themselves and copying what is supposed to mean: They shine through uninspiration." The music is only "cheap everyday rock from the assembly line." with poignant 'Aaahs' and 'Ooohs' ”, only the last line of the song Brain Damage is interesting :“ It reads 'See you on the dark side of the moon', and that says where you can find Pink Floyd today : behind the moon. ”In the course of time this changed; The album has long been considered a milestone among critics: In the list of the 500 best albums of all time by Rolling Stone , the LP ranks 43rd. In June 2015, the same magazine voted the album at number 1 of the 50 best progressive rock Albums of all time .

It is one of the few albums that even in a quadraphonic - LP version, roughly equivalent to 4.0- surround sound , exist. It was released as a so-called "Quadrophonic 8-Track-Cassette " which, like the Quadrophonic LP, was a little widespread in the early 1970s, but mainly in the United States. The 4-track and 8-track cassettes should not be confused with the compact cassette , which has a completely different format.

In 2003, The Dark Side of the Moon was re-mixed by James Guthrie as SACD in a 5.1-channel surround sound version. Many fans complained that Alan Parsons , the sound engineer of the 1973 mix, was not brought in for this task.

In 2011 the album was released as an Immersion Box, which contains, among other things, both the 1973 Quadrophonie mix by Alan Parsons and James Guthrie's 5.1 mix from 2003.

* 1 shows the title sequence as it is printed on the LP / CD .
* 2 shows the actual CD tracks.
* 3 In 2004, the singer Clare Torry , who improvised the vocal part of The Great Gig in the Sky in the studio and received a standard studio musician's fee, legally claimed royalties . On the 2006 PULSE DVD, the authorship is accredited for the first time as follows: Wright / Vocal composition by Clare Torry .

There are also editions of the CD (e.g. Mobile Fidelity Gold CD) that have ten tracks, as Speak to Me and Breathe have been split into two tracks (1 and 2).

Publications related to The Dark Side of the Moon

A full performance of the album is included on the Pink Floyd live album Pulse (1995). The recording comes from the band's last tour in the formation without Roger Waters. In 2006 the DVD of the same name was released, which gives viewers access to an elaborate visual staging of the album with a large round screen and specially made clips.

The director Matthew Longfellow shot a making-of documentary in 1997 , which was released on DVD in 2003 under the title Classic Albums - The Making of Dark Side of the Moon . Musicians and contributors have their say in a 93-minute broadcast.

The album has served as a template for more and less unusual reinterpretations in recent years. In 2003, the formation Easy Star All-Stars released a dub / reggae version called Dub Side of the Moon , which ironically converted the album concept to its own subculture: The ringing of the box office at the beginning of the track Money was replaced by a rhythmic collage of smoker's cough, lighter noises and the like Replaces the bubbling of a water pipe. The a cappella project Vocomotion recorded a new interpretation in 2005 under the title Dark Side of the Moon a cappella . All instruments are imitated by singing or beatboxing . The progressive metal band Dream Theater played the entire album live as an encore during their 2005 world tour and released a live recording on DVD and CD via their own music label YtseJam Records.

In October 2008 Extrawelt, the minimal project by Arne Schaffhausen & Wayan Raabe , published the track Dark Side Of My Room on the album Schöne Neue Extrawelt . At the end of 2009 the band The Flaming Lips released a radical reinterpretation of the entire album.

The industrial metal band Ministry named one of their albums Dark Side of the Spoon , alluding to the sooty underside of a spoon, which is used to boil subsequently intravenously injected heroin , and the drug history of their singer Al Jourgensen .

Klaus Schulze recorded a series of 11 CDs with Pete Namlook between 1994 and 2008 under the title The Dark Side Of The Moog ; The titles of the individual pieces also have the twisted titles of Pink Floyd albums or pieces. Already in 1976 there was an instrumental piece on the album Strange New Flesh by the band Colosseum II with the title Dark Side of the Moog .

Since February 2010 the Swiss Theater Rigiblick has been showing a version in which the music by Pink Floyd has been rearranged for string quartet and piano. The music was woven together with a text by Ray Bradbury to the piece To the Dark Side of the Moon . The Galatea Quartet and Daniel Rohr play .

The musician Nguyên Lê released the CD Celebrating The Dark Side of The Moon in 2014 on which, orchestrated by Michael Gibbs, the title of the album will be interpreted together with the NDR big band.

The US magazine Billboard had the album in the Top 200 for 773 consecutive weeks, and through February 2018 it was in the Top 200 through re-entries for a total of 937 weeks.